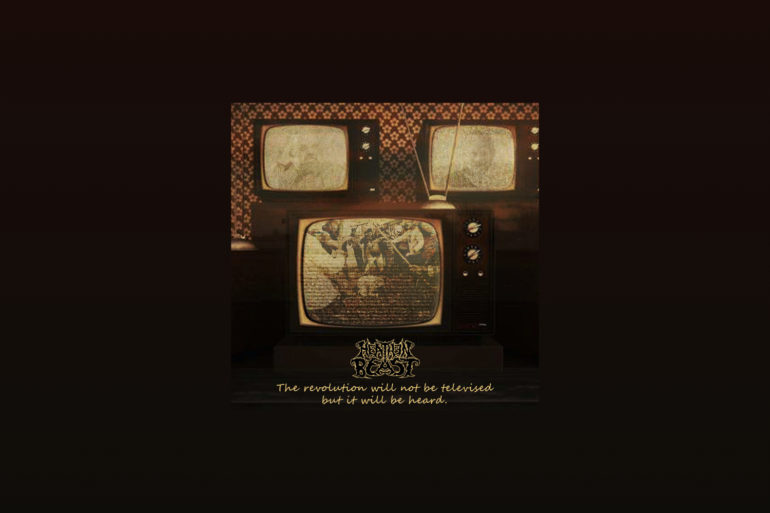 Active since 2010, one of the spectral figures occasionally popping up to make a point in the Indian extreme metal realm is Heathen Beast. Remaining anonymous, and otherwise adopting monikers to appear as a trio from Kolkata, not much is known about the actual identity or identities behind Heathen Beast.

Being anonymous and surviving a decade in the game probably means that Heathen Beast has often successfully got people to focus on their music, the lyrics and the intention behind each release. Instead of playing the guessing game about the supposed musician(s) behind the “atheistic black metal“ band who’ve gone on to take a detour into grind ($cam), understanding their music is certainly rewarding.

Across 12 gnarly, cut-throat tracks, their new album The Revolution Will Not Be Televised But It Will Be Heard is acerbic; a mind-melting listen that takes a lot of names and kicks even more ass. Where they’ve previously been resolute in their hate for idol worship (The Drowning of the Elephant God, 2012) or India’s increasingly right-wing governing policies (Rise of the Saffron Empire, 2016), this album is perhaps best described as a flaming flip off that’s pointed squarely at society, India’s law-makers and socio-religious and right-wing cultural organizations and the media.

Armed to the teeth (“our only weapon is the truth. We only show you what already exists,” the artist description on their Bandcamp says), Heathen Beast launch into blast-beat mayhem on songs like ‘Fuck C.A.A.’ and ‘Fuck Modi-Shah’.

There are all sorts of seriously bold snarling vocals, placed between ominous ambient layers and voice samples culled from news media reports and political speeches. Referencing the New Delhi riots earlier this year, the lyrics on ‘Fuck Modi-Shah’ are acutely clear in one sense, “Unlike you I don’t want your death/Murder is not my scene, only justice beget.” If you have the words handy, there’s no double-guessing what the intent here is.

Heathen Beast ramp up on their extreme metal, going at breakneck speeds on most tracks, like ‘Fuck the B.J.P.’. There’s skull-numbing influences of black metal, grindcore and death metal and equally timely criticism of India’s deteriorating law enforcement on ‘Fuck Your Police Brutality’ in the wake of the custodial deaths of P. Jayaraj and J. Benicks in Toothukudi. The track slows down to a breakdown and brings in tabla sounds, which carry forward into ‘Fuck the R.S.S.’, a little bit of crust-punk styled fun on the album, with gang vocals of “Hindu khatre me hai/Say it till you believe.”

A lot of The Revolution Will Not Be… is harrowing in that Heathen Beast always returns to ending blast-beats but they provide breaks when they put the tabla as a driving rhythmic force on ‘Fuck Your Hindu Rashtra’. It’s a groovier turn that arrives just towards the end of the album, which also makes sure it’s not all just a tirade.

The closing track ‘Fuck The Congress’ is probably a good (even if plainly symbolic) reminder that Heathen Beast is just about hitjobs. At a time when music in India needs more spine, hip-hop might be leading the way but it’s heartening to see heavy music have a formidable rep.