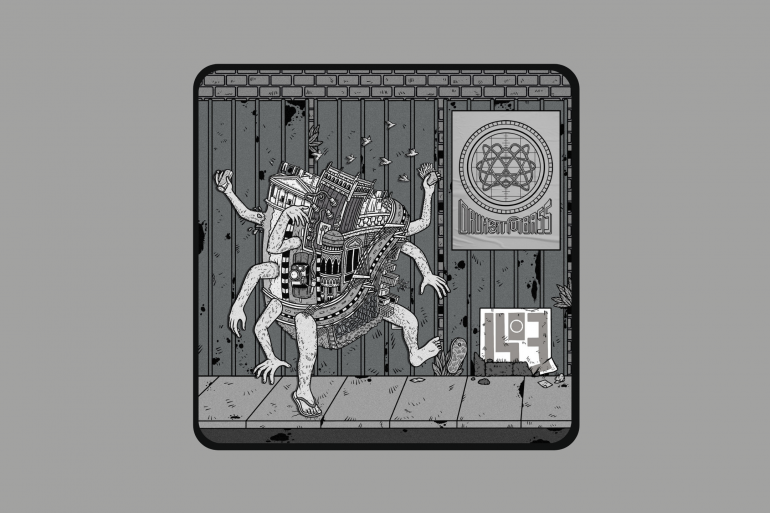 If there’s one thing that defines drum’n’bass, it is consistently regenerative. Spread out across micro-generations over the last 30 years, D’n’B continues to look for that next ‘exciting new sound’ and with Mumbai-based Drum आणि Bass’ latest offering, the ‘bastard child’ of electronic music now appears in a refreshing “Marathi/English” avatar.

Releasing today, 1403 is the audacious debut full-length album from Drum आणि(and) Bass – bass player Nathan Thomas (aka NATE08) and drummer Dhir Mody’s live project. Born out of jam sessions and studio work over the past couple of years, the duo is busy carving out a niche by applying electronic production to influences from jazz, jungle and glitch to their live sets, the energy they have successfully packaged in the new seven-track record.

Careening between gritty explorations of dub and footwork, 1403 follows more in the footsteps of contemporary D’n’B practitioners over at Boxout.fm and BASSFoundation (OX7GEN, Rohan Kalé, Taru Dalmia and Aeon Waves to name a few) than its UK originators. Impressively enough, the album also manages to chart a new direction, for itself and for the sound that has infiltrated and influenced club culture since the early 90s.

Clocking in at just under 40 minutes, 1403 kicks off with ‘108.9’, an experiment in stretch music and a nod to fictitious pirate radio station Kurupt FM. Creating an indivisible sculpture of moods and musical forms, the track samples Brentford’s MC Sniper, lacing his braggadocio with electronic textures while allowing Assamese keyboardist Ronojit Chaliah (aka Ron Cha)’s buttery jazz and Mody’s syncopated footwork to stand out.

The track that follows, ‘What Thing’, brings this pirate radio culture home, with a quasi-credit roll (à la J Cole’s 2014 Forest Hills Drive) voiced by DJ Kaale, but in the style of loudspeaker announcements at your typical gully shindig. Or as Kaale puts it, a ‘sarvajanik mahotsav’.

Throughout the record, there is a traceable attempt to depict Mumbai in its natural order and chaos. The duo pulls a host of natives – Warren Mendonsa, Vasundhara Vee, Sid Shirodkar, Yung.Raj  – to lend the record a fuller and vibrant sound, even featuring a posthumous appearance from Bengaluru jazz pianist Karan Joseph on the track ‘Dudhpuff’. A medley of human voices and local elements also find a place in this inner-city soundtrack, just as they do in the artwork and visual identity designed by Sachin Bhatt.

By the third track ‘Don’t Know How’, the album is catapulted to the familiar rhythm and energy of drum’n’bass, teleporting you to jungle raves and arena parties from the early naughts. Mody, who has previously supported acts like Sandunes, uses plenty of breaks and drum fills on ‘Mind of No Mind’ (with its multiple features), to add some variation to what could have just been a simple beat.

‘King of Good Times’ (featuring Azamaan Hoyvoy) is similarly built around Nathan’s juddering bassline and rippling sheets of glitchy electronics. This lends the songs the accelerated yet organised rhythms, culling out some speaker-busting cuts in the latter half of the record. The final track ’40P/Väisälä’ like its celestial namesake, engineers a mellow atmospheric groove before diving into brass tacks with assists from Mendonsa (Blackstratblues) and Shirodkar (Ape Echoes). The combination of toughness and mellowness makes it sound a tad melancholic, but without compromising its street/dancefloor energy.

From a casual browser’s perspective, however, 1403 excels when it forgoes the hardcore rave sounds for a jazzier, more experimental approach. But in its entirety, the live energy of the record makes its a critical addition to the portfolio we (and Bombay ravers) have come to expect from Drum आणि Bass.

1403 is now streaming on all platforms. You can purchase it here on Bandcamp.