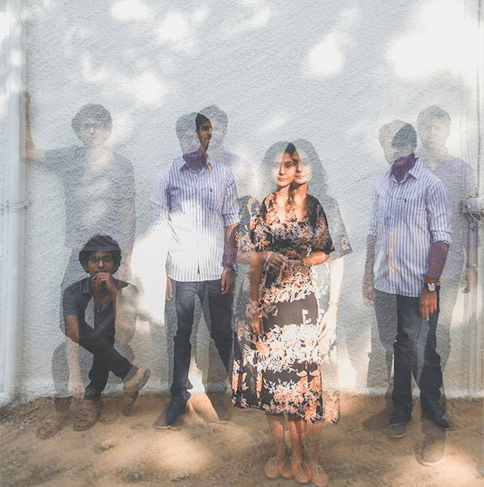 Kitchensink is not new to New Delhi’s independent indigenous gamut. An active part of the burgeoning scene, the band writes songs that combine the “improvisatory soundscapes of synth-rock and crossover jazz with immersive and deeply personal lyrics”.

The group has released its debut album Harmless Things this July, a compilation of tracks written since the bands’ inception in 2014. The band features Smiti Malik on the vocals, Siddharth Jain on the drums, Adhir Ghosh on the guitar, bassist Amar Pandey and Ritwik De on the keys and synth. Mixed by accomplished sound engineer, Miti Adhikari, the album been recorded in Delhi in its entirety.

The track ‘Silence’ kicks off the album, with a distinct aesthetic that seeps through the strappy vocals and the blingy bass. It’s an aesthetic that seems to have a choke hold on the entire first half of the album. On the songs ‘The Loop’, ‘Copy Cat’ and ‘Making Meaning’, we see a cohesive structure in place. They are vocally and instrumentally pleasant, a sound that is refracted within the scope of each track. It’s most definitely a mood album, one that is very is very emotionally and sonically consistent. It’s agreeable, it’s enjoyable and it’s sweet. However, it is low impact. On repeat listens, one can’t help but call into question what is backing the aesthetic beyond the surface level mood of the tracks.

The song ‘Funny Girl’ marks a character switch. The track almost invigorates the album’s soundscape, a soundscape quite evidently begging for some character and angst. And boy, does the track deliver. It drags the album back from the precipice of linearity with it’s two strong feet, dirty guitar licks cranking up the flair. The band seems to have a penchant for build-ups and it pays off big on ‘Funny Girl’.

In the throes of this new flush of identity, the track ‘Four-Walled Memories’ leaves nothing for the back-burner. Packed with melody and grit, it’s an artistic statement all in of itself. Smiti’s sticky lyrics lyrics further elevate her reification of memories and their reveries as they envelop us, the imagery asunder.

‘The Fall’ chips away at the linearity built up, it’s dreamy backing instrumentals reaching a maximal crescendo. The closer ‘You’ neatly gift wraps the album’s loose ends with romantic guitars and thick sounds.

Coming out of the tail end of this album, the atmosphere was probably too aesthetic that it fell flat emotionally. The structure not as muscular as desired, with the album feeling very much like part A and a part B.

Harmless Things doesn’t have a central identity or an engaging concept but is a worthy debut put out by the Delhi rockers. Stocked with some stellar singles in the second leg of the album, Kitchensink has surely fortified a stage for its future.