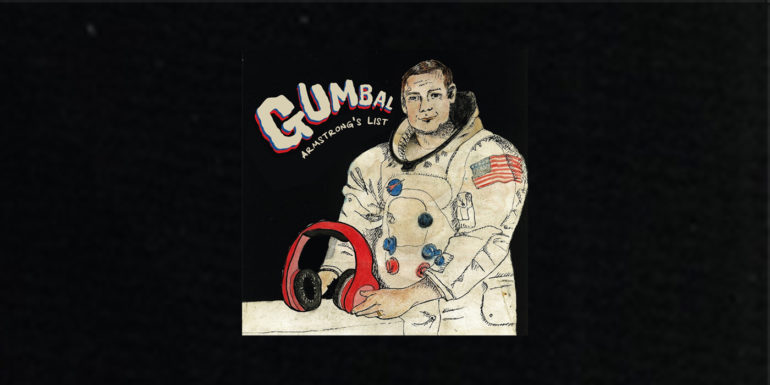 Assisted by audio from the world’s maiden rendezvous with the moon, Mumbai-based Gumbal proves its worth as contenders.

A supergroup of sorts, Gumbal assembled itself from the currently fractured Mumbai indie scene. Vocalist Arjun Iyer and bassist Satish Sridhar got together, released an EP and called upon the skills of Spud in the Box’s Siddharth Talwar and ex-BLEK drummer Varoon Aiyer, completing the quartet.

Building on the same sounds but towards greater expanses, the band released their debut 7-track album Armstrong’s List. The album is billed by the group as a “fictional reimagining and representation of the thoughts going through Neil Armstrong’s head on his way to the moon fifty years ago”. It is interspersed with the astronaut’s radio grabs from the 1969 moon landings with snappy instrumentation and lyrics that point skyward and inward.

Lyrically, Armstrong’s List occasionally addresses the protagonist as his conscience, sometimes autobiographically. As the lines get denser, existential crises are brought to the front. ‘Wonder and Wonder’, the third track, poses question after question – “What cultures thrived in a place where absence reigns in Torricellian waste?” “What joy could nothing provide?”

‘That Tiny Pea, Pretty and Blue’ borrows the title from a Neil Armstrong quote and ponders the curiosity of man and his evolving theories as time progresses. There is angst in ‘The Eagle has Landed’. The isolation that he begins to relish on ‘Small Step’ falls apart immediately standing on the edge of the moon, blanketed by nothing.

It would be hard to listen to this album and not think of the term “prog”. Gumbal, Varoon’s drumming in particular, masterfully counts in fives (nines on occasions) through most tracks. The rhythms are circular and broad enough to be inclusive, easy for the listener to settle into a groove. Whether programmed or not, the drums sound beefy and intelligent, like the sports-quota kid in school who inexplicably mopped the floor with you at a poetry recital. The bass is like his friend that’s always around – inseparable. The bass provides the oft-neglected service of “bringing the listener back to the groove in case they’ve meandered away”. Certain passages are a little clustered and can get lost in the odd timing of it all, but the bass brings you back to the party.

The guitars could have been a little more adventurous. They are a little sterile, framing themselves as functional devices. As a result, the riffs throughout this album are barely left of bland. In certain instances, without the odd time signatures, a lot of the guitars would be lost to the repository of done-to-death pentatonic riffs. There are a couple of songs that stay within common time (4/4, that is), and regrettably, they are almost instantly forgotten, barring the lyrics. The vocals are well-thought-out and executed, but do borrow considerably from predictable sources, like Maynard James Keenan from Tool (more Perfect Circle) and Soundgarden-era Chris Cornell.

The album does benefit from some neat production and studio trickery: the songs sound slick and are paced well, the vocals intermittently put through a filter or two to mirror the journey into space. There is the sneaking suspicion, though, that stripping away even part of the grooves for something more four-to-the-floor would cause the songs to fall apart immediately. The guitars can’t seem to match the drums in intent. Sure, everyone is good at what they do but pound-for-pound, the drums do the heavy lifting, keeping the songs interesting.

That being said, this album is worth the listen and has something for everyone. It is heavy, but it isn’t discouraging. The lyrics are worth taking note of some wonderful references in the middle. Gumbal isn’t gunning for a revolution, sonically or otherwise. But its reaching for it has yielded a solid album.