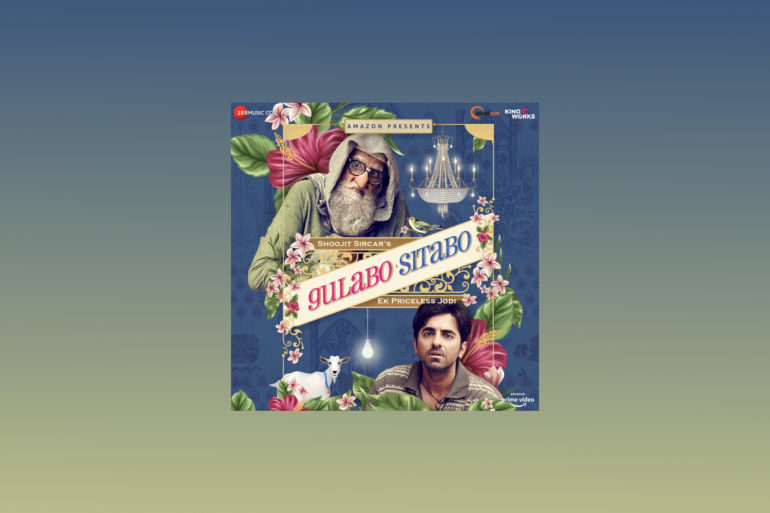 As if Gulabo Sitabo didn’t become revolutionary by going against the tide with an entirely original soundtrack, the makers went a notch above to release the full music album weeks before the release. This comes as a big aberration in recent times when Bollywood films’ soundtrack is frustratingly released on the day of, or even after the film hits the screens.

Four out of the ten songs have been composed by Shantanu Moitra, who handled most of the bulk in October as well. Anuj Garg gets a debut here and helms four tracks. Abhishek Arora, who got introduced by director Shoojit Sircar in Vicky Donor composes arguably the most memorable one in the album.

Shoojit Sircar’s October featured a very short soundtrack as the film didn’t demand anything other than a score. The length of the Gulabo Sitabo album made one wonder if the film will be overloaded with music. However, Sircar, who has historically been pretty judicious with the usage of music onscreen, demonstrates a full-length album can be used with a modern approach in a featured film. With the entire look and feel of Gulabo Sitabo centring around the old and lost riches of what was once a grand and opulent Awadh, the music really finds resonance.

Abhishek Arora gets Piyush Mishra to sing the delightful ‘Jootam Phenk’. Mishra is a great choice for this swing piece that immediately reminds the listener of ‘O Fanny Re’ from Finding Fanny, without sounding derivative. Arora keeps the arrangement quirky and fun, using the clarinet, saxophone and guitar really well.

Shantanu Moitra’s ‘Kanjoos’, sung by Mika, is the least effective song on this album. The electronic arrangement definitely awkwardly stands out in a film and soundtrack brimming with very earthy sounds. Moitra immediately makes ground with ‘Kya Leke Aayo Jagme’, that is written and sung by Vinod Dubey. The other two Moitra songs are instrumental themes, both used in the film extensively. The ‘Gulabo Sitabo Theme’ with the sitar and shehnai solos represents the geographical setting of the film, while the second theme that uses the clarinet is more apt for the overall look and feel of the film. Rathijit Bhattacharjee has arranged and played the khomok, do tara and kanjira in all of Moitra’s songs.

The star of the album is undoubtedly debutant Anuj Garg. His music is entrenched with folk sounds. ‘Madari Ka Bandar’ has him put together a folk tune that Tochi Raina effortlessly croons. The song has beautiful string instruments like the banjo and mandolin played by Ankur Mukherjee. The song that perhaps best represents the feel of the film is Garg’s ‘Do Din Ya Ke Mela’. It has two versions, one sung by Indian Ocean’s Rahul Ram, and a ‘reprise’ by Tochi Raina. These are very strong folk-rock tracks, with top-notch arrangement (the electric guitar solo really gives the song a lot of gravitas).

Dinesh Pant pens the very apt ‘Budhau’, written for Bachchan. The song comes in two variants – the reprise has a lot of string instruments and is very folk and rustic. The version sung by Bobby Cash is perhaps the unsung hero of the album. As the singer’s name would suggest, this one goes down the western/country route. Robin Fargose’s trumpet in the song, the light acoustic guitars, the strong bass, and the percussion make this a very well-rounded track.

Anuj Garg is the star of the show, and it will be very interesting to follow his career’s trajectory.

Shoojit Sircar once again delivers with the music. Credit should go to him for constantly opting for originals. More so for finding the right balance between putting faith in the old Bollywood way of letting music be an important part of storytelling, while still using it very judiciously, in the manner of background music.