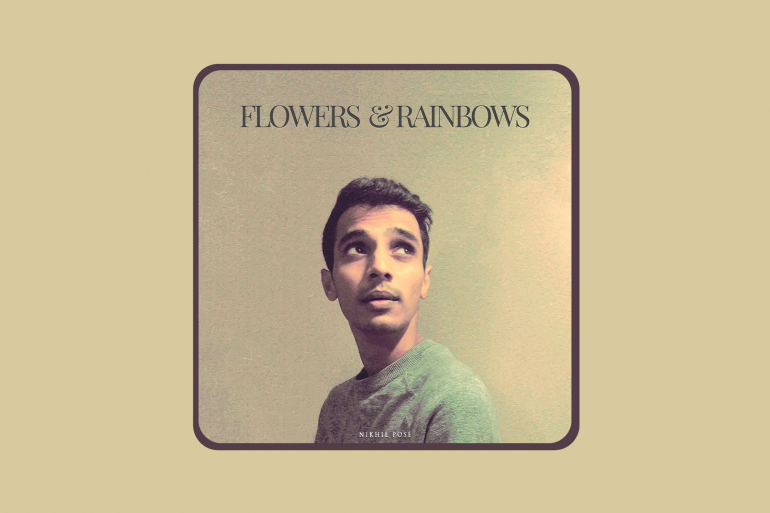 Flowers & Rainbows by Nikhil Posé is a soothing emotional odyssey

The departure of a loved one or significant other from your life often excises parts of your soul. The recovery process is extremely painful – teeming with insecurity, hopelessness and disillusionment with the notion of co-existing with another human. Yet, we find ourselves in the pursuit of relationships even though our cats are clearly the undisputed cutest of all time. Mumbai-based singer-songwriter Nikhil Posé’s debut album, Flowers & Rainbows is an intimate and detailed look at this entire journey.

Nikhil incorporates the sounds of pop, rock, R&B and soul music into his immaculate storytelling. He has been establishing his sound since 2019 with endearing singles like ‘Numb’, ‘Four Ages’ and ‘Don’t Hate Me’. Dropping new music every two weeks since July 2020 in the lead up to the album, he finally presents his first solid body of work.

Overdub your guitar a couple of times, maybe add bass and drums if you’re feeling frisky, slap a bit of reverb and you have the blueprint of Nikhil’s sound. But what you most definitely cannot replicate are his super innovative chops as a singer, melody writer and lyricist. The album can be construed as a loose concept album that maps the entire journey of grieving a break-up from the initial shock to denial to acceptance and possible self-actualization at the end. Nikhil’s impressive storytelling involves specific micro-details of the process while keeping it just vague enough for the listener to fill in the blanks with their own experiences.

‘Tell Me About You’ is the perfect tone-setter. There is a lot of space in the mix and stark minimalism in terms of the number of instruments – just his voice and a guitar. The lyrics are painful, desperate and emotionally stirring as he chronicles the break-up and his quest to rediscover an ex-partner who has fallen away. This aesthetic is adopted and slowly built upon throughout the album, making it feel like a very cohesive and focus effort. For example, ‘Give me Love’ takes the torch from the opener and explores the denial aspect of the break-up with much more detail and complexity.

With the vibe and pattern established at this point, Nikhil commits hard to it. Things pick up with ‘Look What You’ve Done’ as the energy and density of the track increases with the addition of faster guitar parts and ambient synths. The melody and harmonies complement his voice perfectly. The lyrics look at the impact his partner had on his life and how this change has left him in a state of permanent emotional disarray.

Nikhil goes even deeper and gets painfully specific over the course of the album with the themes. ‘Grace’ deals with the insecurities surrounding the break-up. ‘Infinity’ talks about the positives of the relationship in a scarring retrospective with an exceptionally goosebumps-inducing guitar solo at the end.

The rest of the album follows in the same vein. The title track talks about the dying spark of a relationship and ‘Dream Together’ envisions a more optimistic parallel universe where they are still together. All this culminates in the final ‘act’ – the tracks ‘April’ through the closer, ‘Moving Along’. These tracks see him gradually licking his wounds and climbing out of the pit of despair before taking his first steps to finally move on.

The only real drawback of this album is that there are parts, especially in the second half, which tend to drag. The album with 12 tracks at over 42 minutes could definitely be trimmed down to be much more concise and effective. There is a particular challenge behind conveying complex ideas without being too tedious – an area where Nikhil has some scope to improve upon.

Either way, Flowers & Rainbows is an incredibly innovative look at this painful journey that all of us go through at some point in our lives. His talents as a songwriter pay off in spades. His ability to craft emotionally resonant soundscapes with a handful of instruments is a testament to his unique talents as a storyteller and musician. Nikhil has delivered a truly exceptional and unique debut album which is bound to stay with you for a long time.

Listen to the album here.