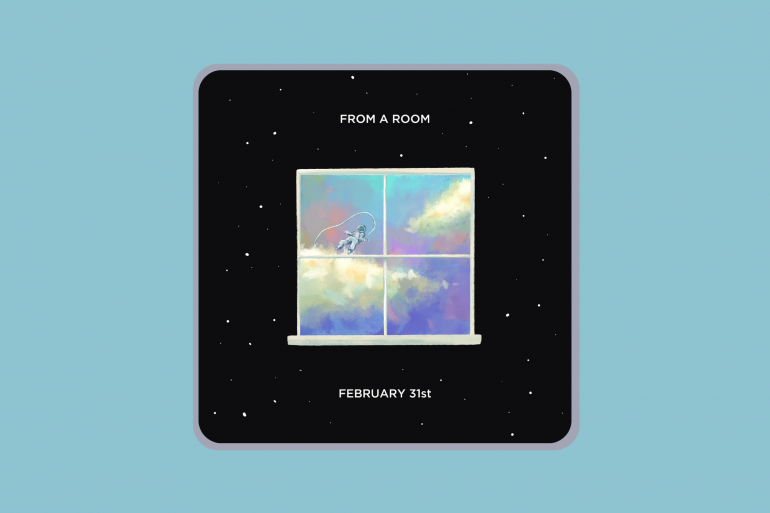 An elusive Bombay-based audio engineer – Lakshman Parsuram reworked on his old projects during the lockdown. He released a 5-track, instrumental post-rock EP From A Room, under his moniker ‘February 31st’ in the first week of November.

The soundscape of the EP is comparable to projects by post-rock artists like Hungry Ghosts and Sleep Dealer. With plenty of overlapping melodies, bass-heavy sounds, instrumental layers and percussion accents, some of the tracks do sound a little muddy in places – whether intentional or accidental.

‘Hello, Rabbit Hole’ opens the album with its minimal drum pattern accents, drone loops, supporting guitar melodies and delayed effects leaving a longing and melancholic feeling and setting a vibe for the rest of the EP. The second track, ‘Overturn’ begins with a music-box like melody and progresses with harmonies of guitar melodies building the atmosphere. The track has more prominent drum sounds and with the loudness, the focus goes straight on to the basslines.

‘The Interlude’ brings the tempo down with drone and synth sounds. A track sprinkled with intricate melodies throughout, simple bass and percussions provides a sort of base structure for the many elements. Progressing to the second half of the EP, ‘Fine Lines’, with its basic basslines, complementary percussions and layers of sweet melodies on guitar and kalimba-like sounds leave a lingering bitter-sweet feeling. February 31st ends the project with a more aggressive and higher tempo track – ‘Speak to me’.

The EP has a lot of likeable elements, but it fails to make a very deep impression due to the lack of anything extraordinary. The project feels just a step away from being complete. Although every track does seem to have its own character and essence, they are just not fully developed and makes one wonder about what they could have been. On the bright side, there are certain musical elements in the project that do raise curiosity to see how this artist evolves his soundscape over his future projects.

It takes time and effort to pursue independent journalism, and we need your support to continue producing ad-free, unadulterated content that you would appreciate. To read more articles like this one and keep a pulse on the newest sounds in the Indian Independent Scene, subscribe to our new offering simply.ahummingheart.com