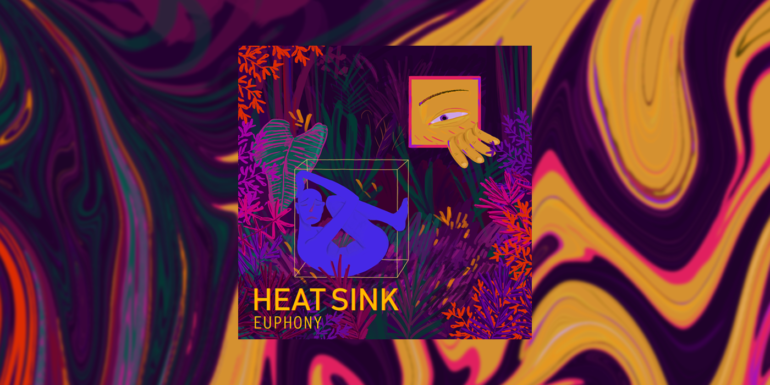 Straight out of Ahmedabad and full of quirky surprises, Heat Sink is an indie jazz/progressive rock outfit who have been making waves for some time leading up to the release of their debut EP, Euphony. Their penchant for bold experimentation and challenging the current musical landscape has consistently landed them on top of multiple national competitions and have earned them the label of being one of the most original bands in the country. Over four tracks and 16 minutes, the group flawlessly executes a unique fusion of genres with unprecedented technical prowess. The EP, produced by their bassist Raag Sethi, was recorded at Compass Box Studio, Ahmedabad and mixed & mastered by Thomas Juth, a 2-time Grammy award-winning engineer.

With the level of talent backing them up and expectations looming over them, the group had no choice but to come out firing on all cylinders. This is seen to a large extent on the album but not in the way that you would expect. Euphony is incredibly cohesive and consistent but at the same time takes a lot of pride in its subtlety. A lot of the album’s merits have to do with their knack for crafting instrumental passages that consistently keep the listener on edge. This is done in many cases by the temperamental time signatures, moody guitar tones and the absurdly versatile vocal delivery by both Meera Desai and Protyay Chakraborty.

This is exemplified in the complex opener ‘Time Lapse’ which features tense, dark riffs and slick jazz-inspired grooves. The track presents an incredible sense of chaos and tension through its atmospheric keys and avant-garde song structure. It is by far the most experimental track on the EP and is largely helmed by Meera’s vocal acrobatics as she deftly follows the unpredictable and chaotic instrumentation. The perfectly crafted vocal harmonies that Meera and Protyay bring to the table blend seamlessly with the instrumentation and also with the layered and dense lyrical themes of the track. As insular and reclusive as the track seems to be about what it’s about, composer and guitarist Chirag Todi seems to characterise time as a conscious entity and that our subjective perceptions of time are warped and beyond our control. The follow-up, ‘Impulse’ is a very 50s jazz-crooner inspired track. Again, we have Meera’s angelic and velvety voice driving the track over the understated and subtle arpeggios from keyboardist Nayan Kapadiya and sparse percussions from Pritul Chauhan. The lyrics are again deeply conflicted and talk about a recent episode of heartbreak and the high-speed mental juggernaut that comes soon after which pulls her into this dense swamp of thoughts preventing her from moving on.

Protyay helms the following two tracks with support from Meera. ‘I’m Lost’ is a change of pace from the previous two tracks with its marching percussions and basslines. Although there is some merit to the guitars, the track feels like a straight edge alternative rock track from the 2000s. We lose the complexity and richness of the instrumentation, and they seem to be relegated to the background except for the rare occasions where they pop their head out. At this point, the band trades some of its experimentation and bold approaches to songwriting in favour of visceral and catchier songs. This is not to take away from Protyay’s exquisite vocal performance from end to end on the track. The lyrical themes somehow go even darker with the protagonist being beaten to a pulp by recent events and being stripped of his confidence and inner guiding light. The closer, ‘Dark Light’ sees his vocal performance reaching a fever pitch. Protyay’s soulful vocals navigate through the entirety of his vocal range as he bends it to his will. The track’s instrumentation sees some of the same issues in the first half but makes up for it in its second half with a soul-stirring guitar solo towards the end. The lyrics continue the dark and desolate themes and talk about the pressures of life taking a toll on your mental health and losing your grip on reality. This leads to the protagonist redefining happiness and how he feels that being happy somehow feels superficial.

There is a lot to be admired about this debut effort from one of the country’s most ambitious bands out there. Over four tracks, the group has showcased their technical prowess as musicians and their flair for incredibly dense and witty lyricism. The light and sometimes playful instrumentation shroud the dark and desolate themes of the lyrics. The band successfully creates a unique visual experience with precisely crafted instrumentation and the ethereal vocals from both Meera and Protyoy. The only drawback that the EP faces is its reluctance to go the extra mile on the avant-garde experimentation on the latter half that they so proudly wore on their sleeves towards the beginning. The band’s sonic direction is definitely worth charting from here on out.