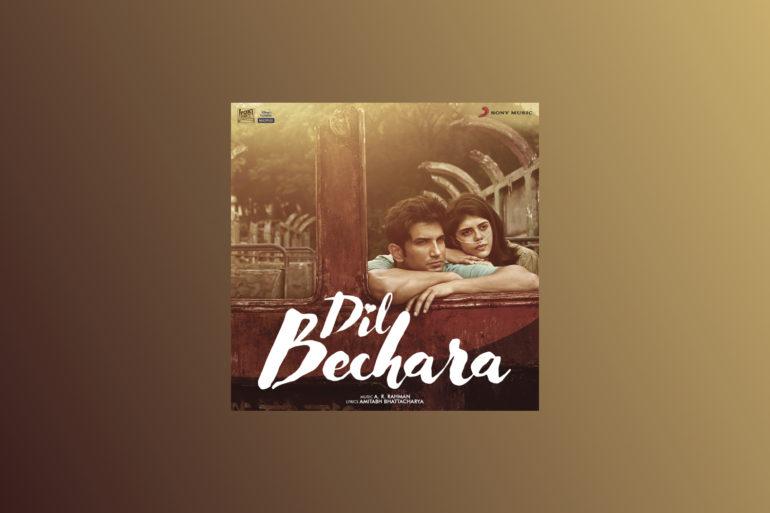 Even as we continue to complain about how terrible 2020 has been, it is impossible to ignore a turn in fortunes for Hindi film music. With four solid albums in Love Aaj Kal (2020), 99 Songs, Gulabo Sitabo and now Dil Bechara (that together has zero rehashes of 2-year-old songs), 2020 is a welcome change for Bollywood music fans.

The Dil Bechara album dropped a couple of weeks back. While it is debatable if the immediate virality of the album is as much down to the public sentiment around Sushant Singh Rajput’s death as it is about the musicality of the album, it has been a while since AR Rahman delivered something this accessible. 99 Songs that released what feels like an eternity ago, is arguably an even better album, but Dil Bechara, which is based on a bestselling book whose adaptation was hugely popular, was always going to have more takers.

Given the premise of the film, both lyricist Amitabh Bhattacharya and composer AR Rahman seem to be pandering to the youth, almost irritatingly to an extent. On the title track that can surprise the listener with how much of an earworm it is, Rahman sings, seductively about the friendzone and spells out L O V E. He weaves a funky soundscape and adds a trap beat later on in the song that catches the listener off guard. The title track gets a remix in ‘Friendzone’, which seems like a preemptive attempt at not letting Tanishk Bagchi get his hands on this a few years down the line.

Shreya Ghoshal and Mohit Chauhan breathlessly dance around each other’s vocals on ‘Taare Gin’, a song that transports you to a ballroom. Ghoshal’s delivery is effortless as usual, even in the double-time ‘jabse hua’ part. All the breathlessness and harmonies make you crave for a resolution and the crescendo with, “Yeh waada hai, yeh iraada hai”, is quite satisfactory.

The harmony party continues in ‘Khulke Jeene Ka’, that might have the most pleasing opening 45 seconds in recent memory. Arijit Singh and Shashaa Tirupati harmonise almost throughout the song, around pretty piano and flute interludes. Hriday Gattani, who is also the music supervisor on the album alongside Hiral Viradia, sings the sombre ‘Main Tumhara’ with Jonita Gandhi. The melody, vocals and the interweaved harmonies built around minimal instrumentation are the stars here.

‘Maskhari’ immediately takes you back to ‘Matargashti’ (Tamasha) as it starts, because of the similar-sounding titles as well as Tapas Roy’s mandolin and banjo. It’s not the most memorable track of the album even as Sunidhi Chauhan and Gattani have a lot of fun. As pointed out by milliblog, there is an advertising jingle vibe here. This is further amplified through ordinary lyrics, which can be a little off-putting.

‘Afreeda’ sounds as if Rahman wanted to remake ‘Mayya Mayya’ for the 15 second Instagram story audience. Palestinian singer Sanaa Moussa and Indo-American rapper Raja Kumari feature on this Arabic themed hip-hop song. This particular sound is one of Rahman’s many fortes, but while ‘Afreeda’ is definitely catchy, there are so many better ones composed by him, from ‘Wanna Mash Up?’ to ‘Kaara Aattakkaara’, that the Dil Bechara track is left a little wanting.

The playful ‘Mera Naam Kizzie’ is a standout track that also carries the film’s European mise en scène. You can hear the smittenness in Poorvi Koutish’s voice and the playfulness in Aditya Narayan’s as they sing about the protagonists Kizzie (Sanjana Sanghi) and Manny (Sushant Singh Rajput). Koutish and Narayan play off each other’s vocals in the jazzy soundscape created by Rahman, with the jovial clarinet solo at the end that lasts a full minute.

Those who have read or watched The Fault in our Stars know what is coming and it will be overwhelming that we will see Sushant Singh Rajput in this role posthumously. There is a lot of anger and confusion after the actor’s death. There seems to be scope for a genuine conversation and change, not just for the film industry but for any community. However, there is also opportunism and a transparent extension of agendas floating around. On some days, it just doesn’t feel about him even with the scores of daily Twitter trends and prime time news coverage.

The brief two-week period of just having the film’s music with us is a soothing balm, that has helped fans and perhaps those who want to, move from confusion and anger to an attempt to celebrate the actor and remember him with unadulterated joy. Things will get loud again once the film releases. But this interlude feels intimate, joyful with a chance to celebrate an artist the best way we know how, through music.

We remember Sushant through this album, with pathos while listening to the beautiful instrumental ‘The Horizon of Saudade’, with infatuation while listening to and watching him on ‘Dil Bechara’ and with a sad smile when Aditya Narayan sings about Manny’s quiet disquiet, “Mera naam Manny, Manny, Manny, raahat me lipti bechaini” (My name is Manny Manny Manny, a storm wrapped upon tranquillity).