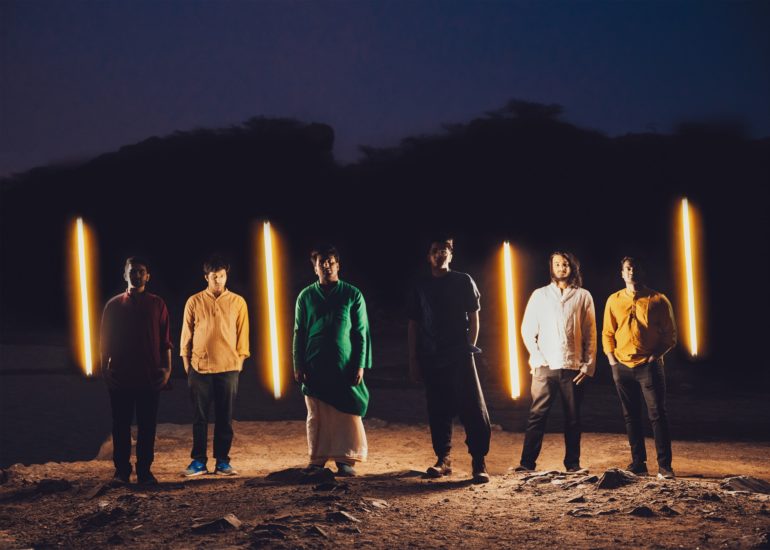 When ‘Shakti’ and its encore act ‘Remember Shakti’ caught the fancy of music aficionados of the wild wild west, the world was infatuated by the idea of fusion bands rooted in indigenous eastern music, flanked by western orchestral ethos. Though bands have never really emulated the kind of success that Shakti managed to achieve, Indian groups have shown earnest willingness to experiment with the possibilities of such genre-bending confluences. Be it the Carnatic rock/metal outfit Agam or the Hindustani based Advaita, a lot of these bands have achieved commendable success with these endeavours. Delhi-based Pakshee a not so motley crew of young musicians is a strong contender to join this impressive list of Indian bands, with its explosive debut album.

The band, though had performed most of the songs in the popular show Music Mojo, couldn’t procure the attention they deserved. With two superlative vocalists producing a friendly derby of Carnatic and Hindustani vocalisations in Sreerag and Kunwar Tanishque Jarial respectively, the band creates a startlingly lucid amalgamation of genres, with Satyam Sah on the guitar, Akshat Pradhan on bass, Pranay Parti on the keyboard and Dan Thomas on drums playing the perfect foil, producing some inspiring jazz and blues-based funk-pop orchestration.

‘Raah Piya’ is a true-blue epic, with the production style one has come to associate with Coke Studio originals. The song is mildly redolent of Amit Trivedi’s innocuously charming ‘Nirmohiya’ in this aspect, despite featuring more complex songwriting. The song kicks off with Tanishque’s mellifluous turn on the Hindi lyrics based in Raag Bhimplasi, before Shreerag comes into the fray, singing in Malayalam, producing a twisty shock for the uninitiated, who might have expected a song entirely written in Hindi. The hegemonic advocates of national Hindi imposition might not be too pleased with this nightmarish cultural shock, but ‘Oh lord music, thee knoweth no language’. The soothing jazz interludes amp the song’s universality, though the brief rap bit might come across as slightly jarring.

‘Ang’ exhibits the classic Jog-Nattai jugalbandi, perfect for a band with an agenda as all-encompassing as Pakshee’s. The composition is a classic Raagmalika, with cameos from the likes of Hamsadhwani and Peelu. The transitions are aptly blunt, quintessential jazz style, much like the semi-classical works of the grossly underappreciated South Indian film music composer Sharreth. The saxophone bits are an absolute delight, acting as a breather from the intricacies of the classical bits.

‘Kyun’ is relatively breezy and uncomplicated, with an easy-flowing melody. The band’s roots in Soul truly comes of its own in this track with its minimal, progressively ambient orchestration. ‘Jogi’ is a folksy delicacy, with another a simple melody for a backbone. The guitaring and crisp bassline towards the outro help the song hit the perfect crescendo.

‘Kosh’ uncharacteristically commences in Malayalam, with a charismatic melody by Sreerag in Kharaharapriya, with Tanishque’s melody leaning more towards Raag Durbar, without being notationally pedantic. The song also boasts of a sprightly breakdown that elevates the song’s general versatility. The synth solo, albeit brief, cements the indispensability of all musicians. The song also is a perfect example of how the band succeeds in blending multiple classical Raags across Hindustani and Carnatic, without coming across as over-ambitious, courtesy their willingness not to stay religiously faithful to the exact structure of them. The song’s primary hook, for example, is far removed from its basic melodic structure, sparking mild tinglings of Keeravani.

The album’s absolute best is, the tranquil ‘Raanjhan’, a song redolent of the transcendental sonic capabilities of the terrific ‘Chill in Nizamuddin’ by fellow Delhi-based outfit Trippy Sama. With another deeply evocative turn by Tanishque in Raag Bhimplasi, the song gradually blossoms to create a uniformly moving effect. But the song truly belongs to

‘Balma’, the final song from the album, has the Revisit Project’s Varun Rajasekharan joining Dan Thomas on percussion. With its extended multi-instrument solo bits, this track acts as the perfect conclusion to the multi-faceted album. The melody, based primarily in Darbari Kaanada is a traditional Indian classical fusion affair, with a peppy percussive base and impressively aggressive guitar prowl.

The album is mostly devoid of beginner’s glitches, except for the Malayalam lyrics sounding mechanical, but with Pakshee’s evident penchant for being fastidious, the group is more than likely to make up for the shortcoming in future projects. Art is often a social reflection, but the Delhi-based band’s artistic display of national integration might not entirely be status quo, but, ‘Oh lord music, thee knoweth no language.’