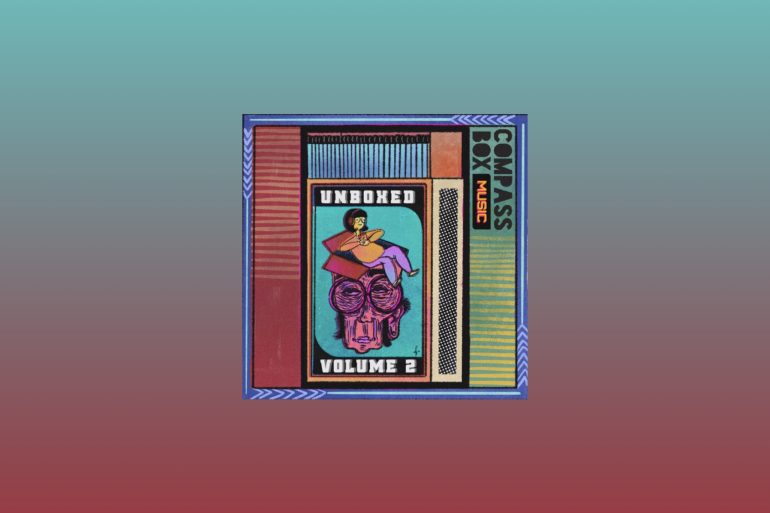 Compass Box Music: Unboxed, Vol. 2 marks the second volume in a compilation series of songs recorded live at Ahmedabad’s Compass Box Studio. The Compass Box Music series follows a similar format to live studio sessions filmed for YouTube that have become a staple in the age of streaming such as BBC Radio 1’s Live Lounge and MTV’s Coke Studio. What sets Compass Box Music apart, however, is both its focus on emerging artists and the intimate scale on which their songs are imagined.

Founded by producer and multi-instrumentalist Raag Sethi, the music series creates a place for independent musicians to hone their chops, film their performances and grow their listener base. The eight tracks of the album have been selected from the sessions, some of which feature bands performing alone, and others in which soloists are joined by the studio’s crew. Here, they double up as session players, including mixing engineer Protyay Chakraborty on the violin and backing vocals, and recording co-ordinator and singer-songwriter Meera Desai on backing vocals, just to name a few.

The album offers largely pop and rock fare from a mix of bands, singer-songwriters and instrumentalists hailing from across India while showcasing songs in both Hindi and English. The opening track, ‘Misery’ by Rohan Chaudhary, ruminates on the impending feeling of loss upon a lover’s departure. The sparse lyrics get straight to the point with a gut-wrenching honesty: “I’m gonna miss you so bad”.

The next track, ‘Leave This City’ by Mumbai singer-songwriter Nisa Shetty, similarly tackles the theme of breaking up, but offers an entirely different take, as she explores the freedom of leaving a lover behind. The R&B and jazz-infused track feature some wonderful harmonies during the chorus as Raag Sethi joins Nisa to provide backing vocals.

On ‘Raat’ by Mumbai four-piece band Saar, a hypnotic melody slithers its way around gently bobbing guitars and drums. Towards the end of the song, the energy ramps up as the arrangement crescendos into a groovy pop-funk section, conveying the chaos contained in the song’s lyrics about bottling up emotions and feeling unable to openly talk about depression.

The funkiness continues on Sharad Singh’s ‘No Lover’, a breezy, Jason Mraz-esque reggae number in which the singer-songwriter croons about a carefree, alcohol-infused romance, conjuring the image of stumbling barefoot in the sand with a bottle of rum in one hand. Not to be outdone by Sharad’s sensual and raspy vocals, Harmish Joshi on the saxophone sends the song in a memorable direction with riffs that effortlessly weave in and out of the arrangement.

‘Sawera’ by Malay Vyas provides a welcome change of pace with a melody that captures the stillness of the morning light falling upon one’s sheets. Malay’s lyrics and vocals exude a mixture of optimism and uncertainty, and the entire piece is elevated by inclusion of Chirag Todi on the electric guitar, Protyay on the violin and vocal harmonies.

The next track, ‘Kashmakash-Qa’ar-Urooj’ by Bhopal-based Samar Medhi, treads into less familiar territory. The three-act structure of the instrumental song sees Samar shifting from delicate finger plucking bathed in echoes to more percussive guitar playing that brings the listener on a journey from despair to hope.

‘White’ by Meghalaya-based Fame The Band deliver a pulsating electro-rock number about how moments are remembered differently once they become memories. Lead vocalist Fame Sangma’s vocals glide above the watertight arrangement, displaying a conviction and vulnerability that suggests the undeniable influence of Paramore’s Hayley Williams. The album closes on a poignant note with ‘Saab Batein Hai’ by Jaipur singer-songwriter Abhin Joshi. The song marries philosophical lyrics about false hope with a soul-stirring melody that is bound to put any listener in a contemplative mood.

The constant variable across the songs – all recorded live in the same studio and with relatively similar no-frills production – means that the artists are not quite able to showcase the diversity of their voices or take unexpected musical routes in a way that might have been achieved through fully-produced studio recordings. However, these are incredibly polished recordings put together in a carefully thought out compilation, and to think that these were recorded in one take speaks to the talent of everyone involved.

Raag and his team have not tried to impose their own style or meddle too much with the compositions. Instead, the arrangements give the performers adequate space to let their voices shine through. True to the album’s title Unboxed, the compilation unearths some of the freshest new sounds from across the country, signalling an exciting future ahead for India’s next generation of songwriters.