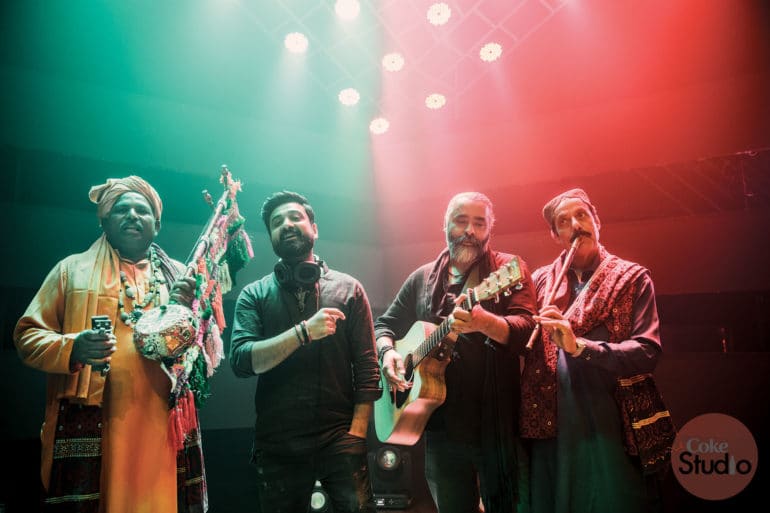 The Sketches perform the best song of the season so far: Coke Studio Season 11 Episode 5 Review

Despite the negativity on social media, that is a bit unfair because the producers are trying different things, Coke Studio 11 seems to have finally found its groove. Episode 5, titled ‘Mauj’ comprises three good songs.

Sindhi Sufi band, the Sketches perform ‘Dastaan-e-Moomal Rano’, the standout song from this episode. Fakir Zulfiqar’s melodious narr (flute) begins the track. The subtle sound of Ashfaque Ahmed’s guitar accompanies lead singer Saif Samejo’s introductory vocals and Bhagat Bhooro Laal joins a little later. He also plays the khartal and ektara, along with crooning the folk part of the song. Singing the words of Shah Abdul Latif Bhittai from his kalaam of Moomal Rano, Samejo’s tender vocals along with Laal’s earthy and rustic sound beautifully narrate the daastan, even if one doesn’t look at the meaning of the lyrics. Somewhere at six minutes, the song has a break, which is followed by beautiful instrumental arrangement, with the strings again leading the way (Haniya Aslam also accompanies with the Turkish instrument, Bağlama). The amalgamation of folk with modern is seamless in the song and the house band is key in that – Rufus Shahzad plays the keys and a small harmonium part; Kami Paul plays the primarily plays the drums except at the beginning when he kickstarts the song with the percussion.

From Samejo and Ahmed’s composition to the singing, ‘Dastaan-e-Moomal Rano’ is arranged extremely well. So far, this is arguably the best song from Coke Studio 11.

‘Dil Hai Pakistani’ begins with Mangal’s throated vocals, backed by the rhythmic beat of the dambora played by Shayan and Darehan. Together, the sound reflects a Baloch touch. After the three-minute-long introduction comes to an end, the song transforms into a rock anthem. Ali Azmat’s vocals (and there are parts where he deliberately tries to sound like Mangal to complement his voice) are strong as always. An interesting patriotic song, it stretches a fair bit and for someone uninitiated to the kind of sound, the introductory section of Mangal’s vocals might seem a tad too long. While the two styles go together well, it can sometimes feel uninspiringly typical Coke Studio.

After coming together with Shuja Haider in the previous episode, Aima Baig features alongside Sahir Ali Bagga in the latest instalment, once again invoking nostalgia of season 10. The two sang the wonderful ‘Baazi’ last season and manage to weave the same magic with ‘Malang’  in this episode. The song carries portions from ‘Baazi’ as well considering its a modern adaptation of the Saraiki folk classic. The track is fun, groovy and zesty. Bagga’s composition and Ali Hamza and Zohaib Kazi’s production is on point.

The instrumental arrangement uses a variety of instruments with great effect. Like ‘Baazi’, you want to dance along to the song. Bagga and Baig’s vocals don’t have any shortcoming and the two sound great together. ‘Malang’ is a winner from start to finish.

Pick of the episode –  ‘Dastaan-e-Moomal Rano’