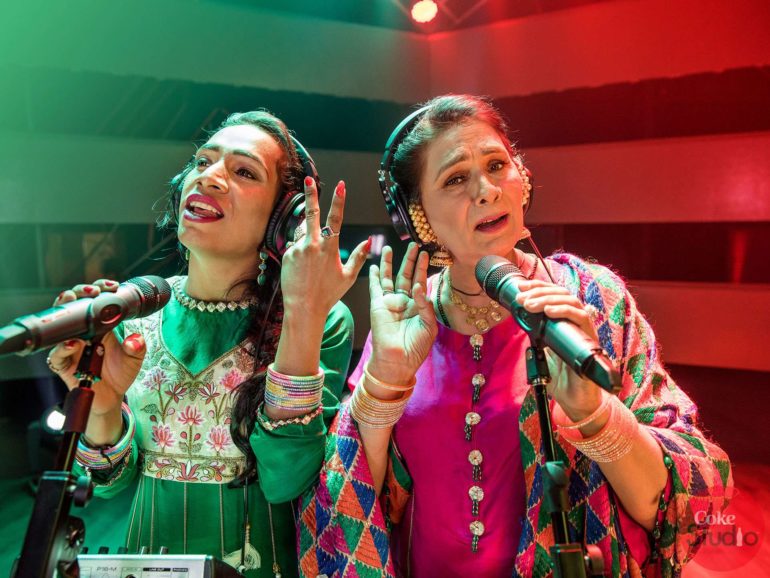 Coke Studio 11 has been eagerly anticipated since the announcement of new producers Zohaib Kazi and Ali Hamza. The last couple of seasons produced by Strings had some great songs but lacked inventiveness, which Coke Studio got famous for. Unsurprisingly, this is something that has been paid great attention to. The new producers started Explorer, a small prelude to the season where they travelled across Pakistan to scout for talent and produced songs with indigenous artists. This was already more inventiveness than the entire Season 10 of the series. The new look branding on social media, the new mobile app and the pictures of the new set only raised anticipation for what is promised to be a season where there will be more focus on creating original content for the series, rather than recreating old classics. The first episode is precisely this.

Fareed Ayaz, Abu Muhammad & Brothers alongside Natasha Baig sing the 13-minute track ‘Shikwa/Jawab-e-Shikwa’ that enlivens the poetry of Allama Iqbal. The track also features the work of Amjad Hyderabadi and Omar Khayyam. Lyrically, this is as good as a song can get. Munshi Razi Uddin’s composition can be best described as a rock-qawwali. Coke Studio debutante Natasha Baig’s vocals are powerful. She holds her own throughout her part, which is commendable among the loud drums and guitar. Fareed Ayaz, Abu Mohammed join in the Jawab e Shikwa part of the song where the song becomes a more traditional qawwali. The thirteen minutes do not feel like a stretch considering the genre and the mood of the track. The backing vocals from the team of (new members) Wajiha Naqvi and Mehr Qadir along with Shahab Hussain (who has provided backing vocals in the previous two seasons) don’t always add to the charm of the song, and at times, particularly towards the end, stand out oddly.

Lucky and Naghma, a transgender duo, grace the stage of Coke Studio 11 in ‘Baalkada’. Described as ‘a folk tune with a tappa style composition, contemporized using modern synth and a whimsical bass line’, the track has a catchy chorus and plays to Lucky and Naghma’s strengths. A pleasant change from the first track, the backing vocals provided by Naqvi, Qadir and Hussain sound great here. However, the contemporary take on a traditional folk melody is overwhelming in places, especially when there is a sudden variation in the tempo.

No points for guessing what genre Lyari Under Ground (L.U.G) and Young Desi’s ‘Rap Hai Saara’ falls into. The verses of this song are in Balochi, English, Urdu and Punjabi but that doesn’t make it jarring at all. Kami Paul’s drums and beats in this song are sensational which is a point worth making considering that the beat would usually be played out of a sampler, but here is played live by the house band. The song, however, starts getting monotonous after a while, could be because of the repeated ‘rap hai saara’ line – it can only sound cool a few times. Young Desi makes an eye-catching entrance, and the camerawork here is deliberately more loose and hip-hop friendly. He provides more energy and enthusiasm in the track, and his lyrics are certainly striking (Pullaya ni Culture, Anday wala burger). Despite that, the song is hardly memorable, which is a real shame since this genre was relatively unexplored on Coke Studio until now (barring Bohemia’s soulful rendition of ‘School Di Kitaab’ back in 2012)

The first beat of ‘Main Irada’ sounds like Coldplay’s ‘Ink’, but that memory lasts just a couple of seconds because the maracas and harmonium come in and elevate the overall sound. It is lovely to see Rachel Viccaji getting a song in the very first episode. The extremely talented singer, who has been a mainstay for Coke Studio in the last few years as a backing vocalist, has gotten individual songs to helm, but still feels criminally underused. Viccaji’s voice complements Haniya’s beautifully; in fact, it often feels like just one voice. The choice of using the harmonium as a central part of the song, to play the hook, was a great decision. It fits in perfectly in the song that is so wonderfully empowering, not just because of the explicit lyrics but also because women of different religion and backgrounds are singing it together and sharing the same stage.

Interestingly, this is the first song comprising an equal number of men and women performing on stage in Coke Studio’s history. Shamu Bai’s classical singing showcases the traditional side of the track backed by lovely tabla and sitar. The Coke Studio Explorer discoveries, Ariana and Amrina, fit perfectly in the song and their ‘Pareek’ chanting sounds wonderful at the back.

It is not just the social message that makes this track great; this episode is peppered with such messages. It is in fact, the melody and the simple yet polished and rounded musical arrangement that make ‘Main Irada’ a winner.

Even though Episode 1 is a mixed bag, it lives up to the expectations that new producers Hamza and Kazi are going to shake things up. This reflects in the tracks, the arrangements, the set and the camerawork.

Pick of the episode – ‘Main Irada’