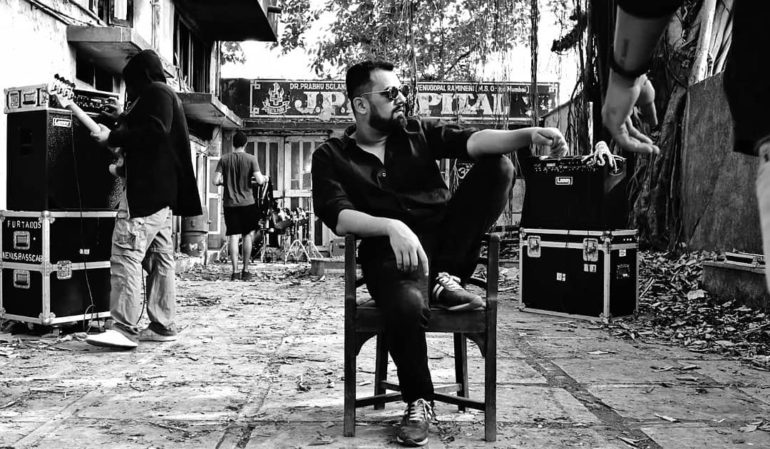 Chabuk declares war against the establishment on Downmarket

Up and coming Mumbai based nu-metal outfit, Chabuk describes its sound as “Rap/Rock/Funk….and some other here and there”. With their amps firmly plugged into their ethos of rebellion, the last thing on their agenda is a genre. To gain a deep understanding of their sound and purpose is to give their modest debut EP, Downmarket more than a respectable number of cursory listens.

The first few passes of the EP read like an articulate, angry grandpa who’s sick of the establishment. Lead vocalist Microphon3’s passionate and unapologetic approach to speaking his mind come off as abrasive and completely left for the uninitiated. A few layers in and the genius behind every bar becomes more and more apparent. Microphon3 exploits his anti-commercial tendencies with his stream of consciousness lyrics to deliver one of the densest and strangely cohesive 16-minute musical experience of the year. The band splinters and tears down the rock and hip-hop playbooks at every turn, leaving a trail of bloody and broken doctrine on song structure.

Microphon3’s infectious flow is fluvial, winding, uncompromising and chaotic. His command over the nuances of language, rhythm and enunciation results in a precise and technically pristine batch of four tracks. This is apparent, for example, in the title track where he rhymes “popcorn” with “ Pop ?”. Apart from being technically masterful, the EP’s sprawling batch of lyrics filled to the brim with the band’s distaste of social norms. For example, ‘Pyaar’ represents the band’s disillusionment with the idea of “love at first sight” and the superfluous depiction of love and romance in pop culture and media. On the track, Microphon3’s effortless bars pulsate between intense accusations and playful mockery over dreary bass heavy post-punk electronica fusion instrumentals. We see him push his lyrical prowess even further on the title track where he uses a clever metaphor of a market to flesh out class distinctions and its effect on the everyday man with a particular distaste towards the rule of fat wads of cash. On the closer, “Shahenshah”, he disowns the rap playbook entirely by crossing into spoken word poetry territory.

At this point, it is worth mentioning that the band also consists of Devanshu Sampat on drums, Michael Lee on guitars and Roop Thomas Philip on the bass, with each member bringing top notch innovation to the table. Bringing back the previously beloved but currently maligned nu metal riffs into a surprisingly fresh direction, we hear number of beat switches and unpredictable segues on the instrumental front. On ‘Pyaar’, the driving, infectious bassline is topped off with tropical guitar lines and playful time signatures. We also hear elements of funk incorporated in the title track with a soft acoustic campfire intro which carries Microphon3’s verses as it spirals up into a spine chilling guitar solo a the end.

The EP is one of those rare instances where poetry and instruments both shine brightly without appearing like an awkward flex. Microphon3’s propensity to bend the rules of language and enunciation with precisely chosen words hits the bullseye on every syllable. Every shift in tone and flow brings with it a thought provoking dissection of the human condition and society at large. The lyrics are a nihilist’s messiah and a misanthrope’s best friend. There is a personal angle and  a more general angle to each of his verses. The instrumentation is consistently energetic with not a single dull moment. What the band manages to do in such a short span of time is beyond astonishing. The EP is not only one of the most exciting hip-hop/nu-metal releases this year, but also opens up new avenues and bolder directions for the burgeoning hip hop scene in India.