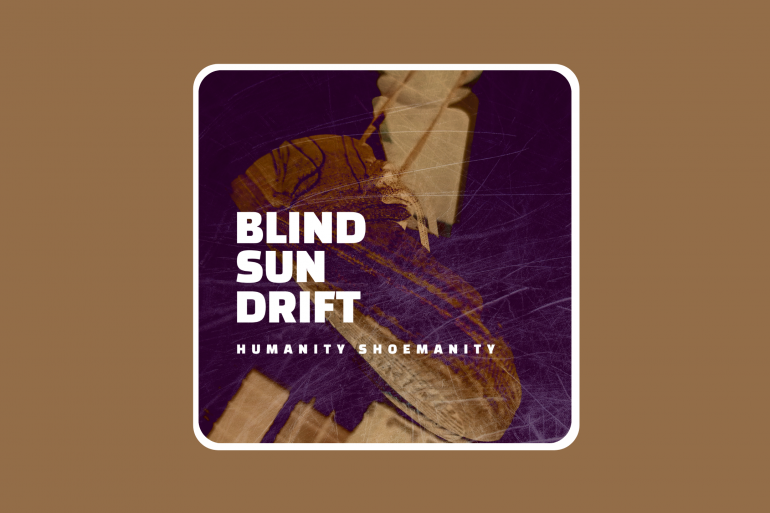 The announcement of the Bangalore-based duo Blind Sun Drift’s EP Humanity Shoemanity on social media was captivating. The post read, “A blind sun drifts, burning what it touches. Burning indiscriminately. And every morning we wake up and count our blessings. It is not us. Not yet. And we play the guitar. And we sing of rage and hope and despair.” If this is your first time reading these lines, they’re guaranteed to arrest you. The same can be said of the band’s debut—it’s arresting.

The duo is Saptarshi Das on vocals, bass, and additional production, and Roktim Bhattacharya on guitars. They’re accompanied by an undeniable presence of purpose. That purpose manifests itself in poetic lyricism in the opening track, ‘The Star’. Later, it meets us in the form of uncontainable rage in ‘Derelict’. Then, as we move through the EP, purpose makes us perk up and listen in ‘Murdertongue’—the most scathing track on the album. In a statement about the project, Blind Sun Drift indicates that Humanity Shoemanity “is an attempt at a rock record. It is what it is.” But, this 6-track exploration is so much more than that.

The pair says that the EP “covers a disillusioned star, celestial treadmills, a drying earth and a whole lot of strummed strings and pounding fists.” But, in between, with tracks like ‘Saint by Numbers’, ‘Fevered Earth’, and ‘Mommy Dear’, Blind Sun Drift offers up a range of emotion that cannot be boxed in by “rage” alone.

‘The Star’ will draw you in with saturated vocals and lines like, “If I wear a mask, it’s for hiding my scars. Nothing surrounds me, guess I’m a star”. Then, just as you get sucked into a world of heavy guitar riffs accompanied by angry growls, the instrumental interlude in ‘Fevered Earth’ and ‘Mommy Dear’ will catch you off-guard. The closing track, mellow and laden with acoustic riffs, says, “A love I feel from a time I know no longer feels my own, staring hard at my own reflection, lies forever more. That you are here”. And, if the poetry wasn’t captivating enough, the fact that the album is done will definitely have you in a bind.

Deliberate in their execution, Blind Sun Drift achieve something in every track on Humanity Shoemanity. Fair warning: brace yourself for the inevitable intensity that will creep up on you, listening to this album. Humanity Shoemanity taps into pools of rage that lie within all of us, exposes ideas of introspection that we’ve all locked up, and will, at some point, compel you into engagement.

Chock-a-block full with political commentary, satire and existential poetry, this EP carries their ideas of truth-telling and awareness forward, manifesting it in full. With their previous releases, ‘Slumber’s Hook’ for example, Blind Sun Drift admitted to beginning their search. In Humanity Shoemanity, they’re well on their way to what promises to be a fulfilling, albeit sometime uncomfortable, journey.