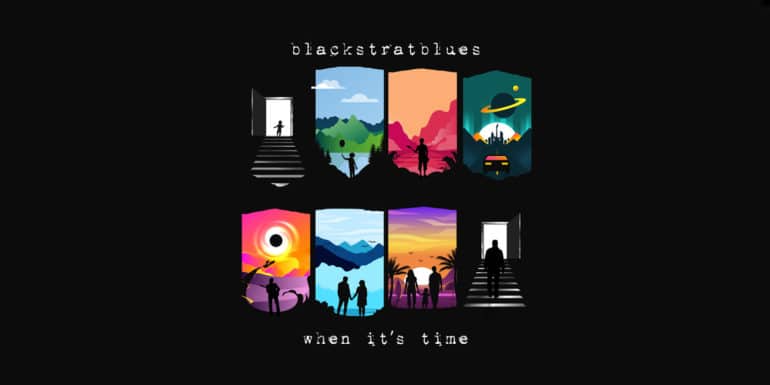 Blackstratblues reaches a bit too far, sometimes not far enough on When Its Time

Abhinav Krishnaswamy·
Reviews
·September 12, 2019
8
Subdued
Greeted by the warmest “Hello!”, followed by the tightest count-in by a 3-year-old, and Nia Mendonsa flags off When It’s Time, an eight-song collection of instrumentals from guitarist and producer Warren Mendonsa. A brand of expressive guitar performance that blends the worlds of blues, ’80s glam and ’70s arena rock, Mendonsa’s sound has become instantly recognisable. A sound that has taken it’s time to acquire more than the grit during the guitarist’s tenure in college-rock staples Zero, or on his previous records.
Warren isn’t shy of rolling the gain back and relying on dynamics to lend each note its own weight. Album opener, ‘Tiny Bit of Sky’, opens as a lullaby that expands itself into an expressive ode to childhood and infancy. The steady pace continues into ‘Happy E Friends’, the guitar getting more wiggle room as the song gathers steam. It’s clear that the band is a well-oiled machine, playing off of each other’s strengths.
‘Too Cool for School’ is where there begins to be some flexing on display. The shapeshifting blues belter indicates the album’s point of adolescence. The gain is turned up, and the blinders are on. ‘Interstellar Roadtrip’ is a nice trippy mid-tempo jaunt. There are hints of pedal steel guitar, a nice answer to the guitar’s perennial questions. It was reminiscent of ‘Trinity’ by Carlos Santana and Kirk Hammett, with a neat little tip of the hat to Steve Vai in the middle. You can’t fool me, Warren.
Speaking of Carlos Santana: On a YouTube deep-dive recently, the algorithm lords sent me on the path of 1999’s smash hit Supernatural, the genre-spanning-but-predominantly-Latin-rhythms album that won all the awards and spawned an entire subset of bar-room entertainers. Halfway through, it led me to think about how different songs had aged to varying degrees. As a child, the album gained a fan through Santana’s inventive guitar melodies, sure, but revisiting these songs made me appreciate the staying power of a few of the tracks, notably the ones that courted the services of other artists. Had they not been on that album, would the guitar have overstayed its welcome? More on that in a bit.
It’s about at this point, that the album starts to tire a little. Nothing is diminished, mind you. Each member’s enthusiasm continues to shine through. ‘Black Hole X3’ is a heavy hitter, led by a mean low-octave riff. The song also features interesting synth parts, leaving the image of a much larger band tearing through this one live, perhaps.
‘Looking for Polaris’ bounces from piano ballad to soaring guitar cry effortlessly and the lead ‘voice’ weaves its way through a notably interesting chord progression. The gaps are starting to show through. Title track and album closer ‘When It’s Time’ has the album’s lone feature from Sid Vashi, his saxophone melding with Warren’s fuzzed-out guitars to create an imposing tone. This is where the Santana parallel can be drawn, but it’s where it also may end.
The songs on Supernatural are the way they are because of the interplay between guitar and vocals, or guitar and another guitar. The songs on When It’s Time are products of a singular focus, perhaps. True, these may have come about organically from bits in the jam room, some even carried forward from earlier albums. While this is unmistakably a Blackstratblues album, the guitar’s imposing presence becomes a burden, one that might have been offset a little had there been a few more significant features. The burden becomes Warren’s to carry, his bag of tricks weighing him down all that more. There are passages on every song that cry out for complementary vocals, the gap becoming a yawning void a second time around. Even the sections that feature an additional guitar: playing both lines only emphasises the need for an opposing force.

This is not to say that things are lacking. Far from it. Blackstratblues are at their expressive best, and it shows. Each instrument, built like a tank and employing brute instinct to carry the songs through. But brute instinct has a shelf-life and isn’t bottomless. Shouldering the weight with contemporaries and competition could be a welcome challenge and one that I hope this band takes, even if it’s just to keep themselves on their toes.