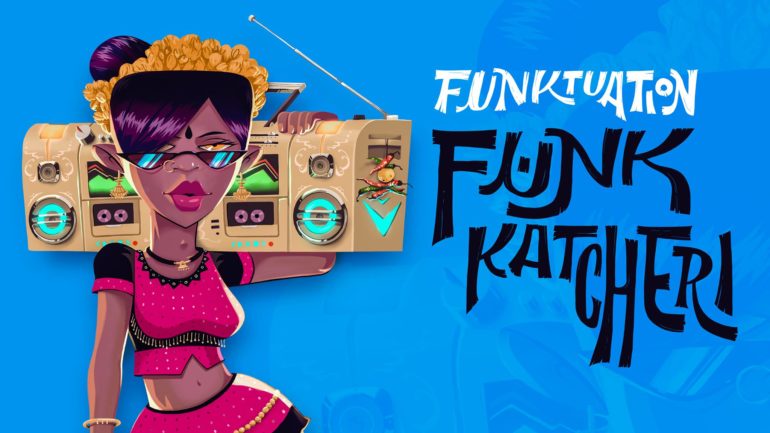 Benny Dayal likes only Funktuation songs and so should you

“Benny Dayal only likes Funktuation songs,” exclaims without the zilchest of ironies, Benny Dayal himself, in one of the songs from Funk Katcheri, Funktuation’s latest album. The crazily self-aware line works gloriously, primarily because of the man who croons it. Benny Dayal, arguably the Ranveer Sigh of all things indie down south, is in top-notch form, elevating to an altogether different level, the ‘Carnatic’ album masquerading as a funk and electronica affair for the poppers and hoppers.

Take ‘Oora Paaru’ the absolute star of the album, for instance. The song, quite the chartbuster already, has ‘Saint’ Benny Dayal flexing his quintessential vocal muscles in an electronic world set in a reenactment of Mark Ronson and Bruno Mars’ famed ‘Uptown Funk’ bonhomie. Benny puts his cemented Carnatic mastery to terrific use, creating a furiously infectious melody based in raaga Abheri. The song seems like that ‘urban’ cousin of the more ‘soberly rural’ Saint Thyagaraja’s ‘Nagumomu Ganale’ from an 80s Tamil movie. The lyrics are also quite appropriately untrammelled. There’s a particularly cheeky nod to Michael Jackson’s ‘Beat It’ an artist whose brand of pop music has not so coincidentally influenced an entire generation or two, including the aforementioned triumvirate of Benny Dayal, Mark Ronson and Bruno Mars. The hep and happening synth and bass add to the song’s old world charm, all the while not compromising on its impeccable production value.

‘Poovey’ is Benny channelling the blues enthusiast in him with a typically showy – if one may be audacious enough to call it so – yet admirably endearing rendition. Like with other tracks, the song has adequate support from an inspired chorus act and the indispensable bass section. The song is reminiscent of Benny’s critically acclaimed ‘Omana Penne’ from AR Rahman’s Vinnaithaandi Varuvaaya,’ vis-a-vis the blues-driven improvisations. The effort might also remind one of Sid Sriram’s now trademark style of collating Indian (particularly Carnatic) and western classical vocal tropes sans the jerks and speed breaks. However, Benny had dabbled in the same in ‘Omana Penne’ much prior to Sid’s tryst with destiny, so much so that quite a few mistook the latter’s breakout Rahman track ‘Adiye’ from Kadal to be a Benny Dayal rendition.

‘Azha Pora’ is a song straight out of an Aniruddh original soundtrack, with its emphasis on lethargic, drawly vocalisation and prepotent arrangements. Benny takes a backseat, with a mildly nasal and caged performance. The kazoo, one of his favourite instruments to bring out live, makes a cameo. Incidentally, he had performed an unexpected and startlingly charming Carnatic piece on the instrument preceding his band’s cover of AR Rahman’s ‘Humma Humma’ for the popular Malayalam show, Music Mojo. The song is strikingly solemn, unlike the other tracks, and works primarily for the very same reason. Who doesn’t admire the silent brooder hiding in pride of overzealous lions?

‘Romba Bad Boys’ is a truly funky affair, with a crisp rhythm and groovy melody. The song’s chorus is an achingly nostalgic throwback to Ganesh Hegde’s 2005 debut smash hit ‘Main Deewana’. The song sticks to the basics, refuses to waver and unabashedly embraces its formulaic demeanour, almost making one mistake it for a Tamil movie chartbuster. That wouldn’t be surprising considering how the Tamil diaspora has been more than welcoming in its acceptance of neo-genres. The intermediary ‘Macchi Session’ is again a nostalgia triggering rejig of the opening chorus of ‘Ethi Ethi’ from the 2008 Harris Jayaraj musical Vaaranam Aayiram. Incidentally, the song had been crooned by Benny Dayal himself. The lyrics, again, are elementarily memorable, augmenting the uniformly earworm-inducing melodies of the album.

‘Podrom Paadrom Killikrom’ is a spiritual cousin of the erstwhile Gods of absurdist music, Live Banned. The song has the zaniest of lyrics, with references galore and a vocalist who’s evidently having the time of his life. The song starts off with an assumed, amiable impression of T.M. Soundararajan, a la ‘Saigal Blues’. And proceeds to produce an incredibly meta-musical composition. Midway into it, a reference to composer Aniruddh is dropped. That the song might remind some of Aniruddh’s Maari track ‘Oru Vidhai Asai’ is inconsequential trivia for the pedantic’s book since the song has not the slightest of cares to give.

The album has been produced exceedingly well and it shows. The ensemble creates an aspirational set of sounds, all whilst uncompromisingly sticking to conventional melody-driven Indian music. Benny Dayal likes only Funktuation songs and so should you. Amen.