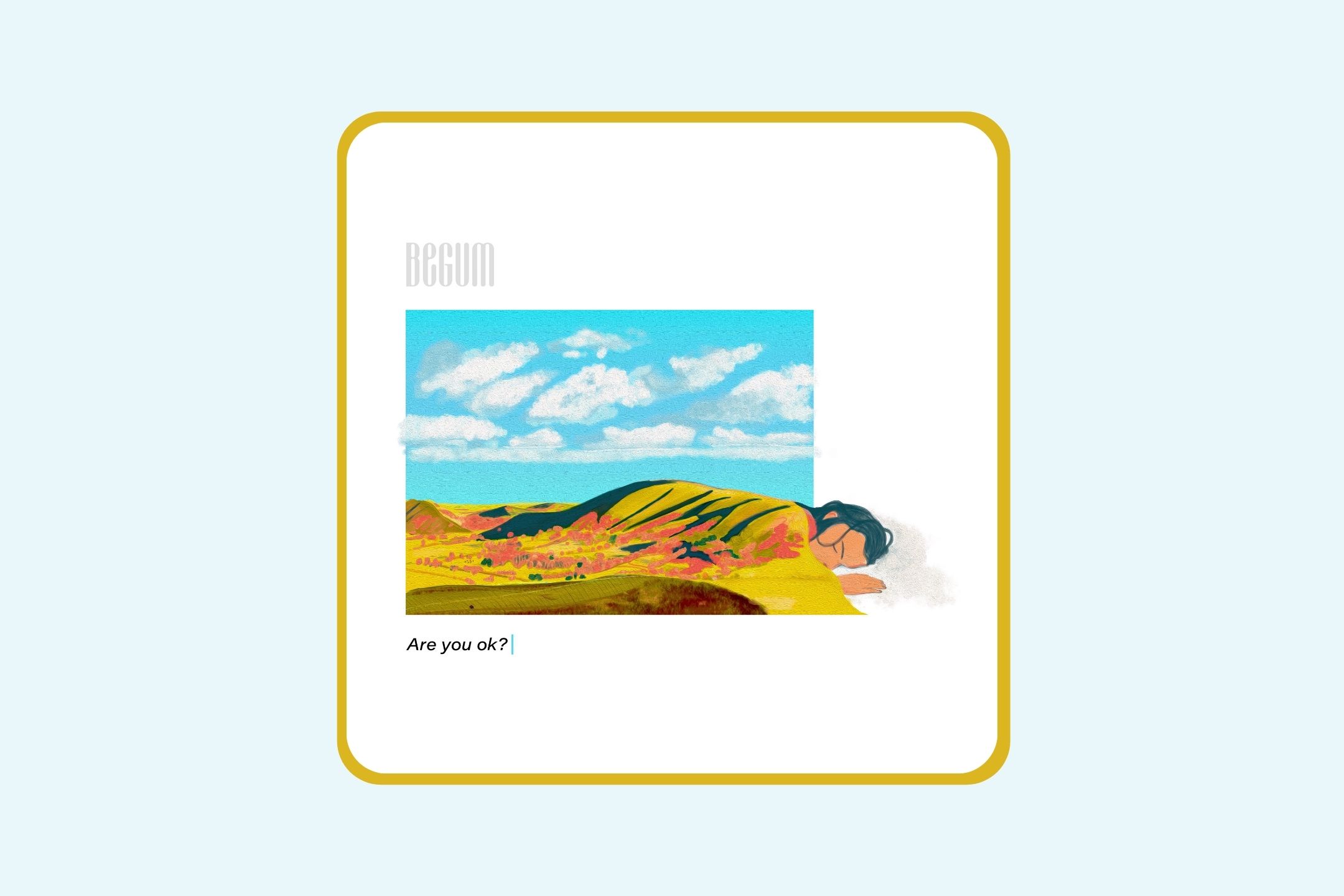 Begum’s Are you ok? is genre-spanning comfort, grief, and confusion rolled into one

Sometimes, being asked, “Are you okay?” is more than enough, isn’t it? But, there is never a single answer; rather a series of answers that open the floodgates to a series of emotions. And, that’s the manner in which New Delhi-based alt-indie band, Begum, present their new album, Are you ok?

Five years in the making, the ten-track album features previously released singles such as ‘Maybe Baby’, ‘Better Person’ and ‘Meena Lisa’, alongside fresh releases like ‘Must Get Out’, ‘Ten Years Later’, and more.

Quintessentially Begum in its presentation, Are you ok? is a collection of explorations and musings on a far-ranging emotional spectrum, covering themes such as heartbreak, love, identity, and everything in between.

Replete with sonic ramblings for intros and interludes, dreamy soundscapes and melancholic vocals, this indie album is chaotic—from the genres it flits through, to the moods it captures and finally, the emotions it evokes in its listeners.

The whirlwind indie experience starts with the title track—a sparkly, leisurely introduction to an album. The ambient arrangement, complete with off-beat plug-ins and experimental effects, is in no rush to settle the listener in. And, just as you begin to recognise your thirst for something more—vocals perhaps—arrives, ‘You Mean Well’.

Kartik Pillai’s vocals and the thrilling pick-up on the drums make ‘You Mean Well’ the sonic equivalent to that scene from Perks of Being a Wallflower—Emma Watson standing in the back of a pickup truck, riding through the tunnel, with her arms wide open.

The agreeable, ‘Ten Years Later’, hits next. Saturated vocals, seemingly unfiltered songwriting and a typical indie arrangement, make for a sunny listen. That’s not to say you should get too comfortable.

And, that’s a warning to be headed for much of this album. Three tracks in, is far enough to know that, Are you ok? is an interpretable, metaphorical vessel of emotion that mirrors the movement of feeling; bouncing between sadness, happiness, longing, confusion and all that good stuff. And the next track on the album, ‘Only If You Care,’ proves that. This one is an eerie vibe change—slow, dramatic, deliberate, and almost the OST to a new-age spaghetti western. The 4-minute-long track combines the new and old; the accessible and the mysterious.

Their previously released single, ‘Better Person’, comes next. Sound-wise, it is sparkly, twinkle-eyed and melancholic in its writing. But, it’s the theme of the track that really captivates. Who’s going to change, and for whom? Intentionally or not though, the happiness of the arrangement completely distracts from the complexity of the theme, perhaps to give way to ‘Meena Lisa’, the sixth track on the album.

The stripped down acoustic single was one of the first teasers of the album, accompanied by an open-ended music video. And, there’s not much more to say about that. But, that’s okay because the tail end of Are you ok? is where the gold lies.

‘Better Person Too’, the seventh track on the album presents as a 5-minute reply to ‘Better Person’. What makes this one so interesting is how unpredictable it is. The first 10 seconds of the track make room for an anxiety-driven song. But, just as your nerves bunch up, the chords played on the keys puts you at ease, making way for the most reflective and vulnerable songwriting on Are you ok?

‘Maybe Baby’ arrives next. And, if the line opening line, “Maybe if the Lord really loved you, he’d tell you,” doesn’t pique your interest enough, the rest of this arrangement is sure to. Addressing all the ironies, unpleasant experiences the world hands out to us, and making room for a shared experience, ‘Maybe Baby’ is Begum’s way of showing understanding.

Are you ok? ends with ‘Must Get Out’ and ‘Lille’. The former is a combination of all the sounds on this album, while the latter is the perfect example of the “sonic ramblings” mentioned earlier, with a dash of self-indulgence.

At the end of the day, Are you ok? closes strong. With this album, much like with the rest of their work, the band is very transparent about leaving things open to interpretation. There are no hard lines here; no absolutes.

For a project five years in the making from a band of their repute, Begum was surely subject to eager eyes and ears. But, on Are you ok? there is not a hint of self-consciousness. And, that is perhaps its biggest feat.