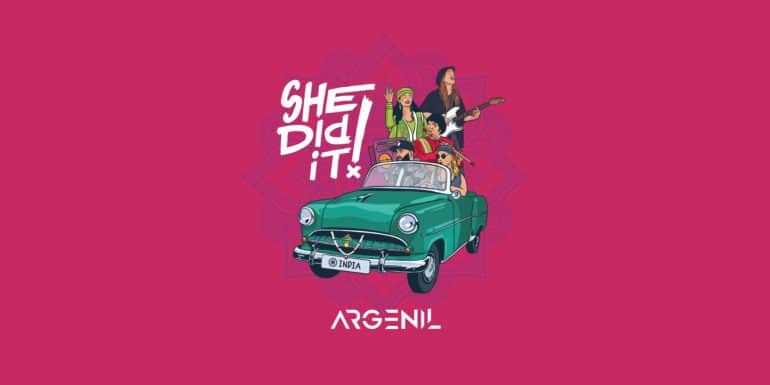 Bengaluru-based electronic music duo Argenil has released its latest EP She Did It. With the EP that comprises four original tracks and a remix, the duo seeks to carve out a niche for itself in the oversaturated market of EDM and trap tracks that flood the airwaves and generate millions of streams.

Sonically, the five-track EP offers nothing groundbreaking, and the first four tracks rely on the massive drops that blow your socks off, at least for the first couple of plays. For an outfit that labels its music as ‘Hindustani Trap’, it banks on Persian sounds, much like Hindustani music itself, to deliver the ‘oomph’ factor that makes the drops tick.

‘She Did It’ launches the EP staunchly with its high pitch dhol and claps creating an electrifying canvas for the New Jersey-rapper Eddie Heartthrob to spit his frail verses on. It’s a pity because the rapper’s voice has a nice timbre. The song’s saturated production and oft-used elements like brass staccatos and Persian sounding synths, make sure that it stays afloat.

‘Help’ recycles most of the elements from the previous track and features Birmingham-rapper Yatez. The drop introduces a very cool syncopated percussion in the third bar but follows it up in the end with a weird aalap that sits uncomfortably in the mix. The lyrics are already hard to follow with the rapper’s Brummie accent, and the brass synths that cut right through the mix makes it even tougher.

The next song offers a much-needed break from the heavily produced previous tracks. ‘Dholna’ features Delhi-based musician Deveshi Sahgal begins with pleasant guitar strums and is soon accompanied by her rustic vocals. By the eighth bar, the guitar strum acquires a sweeping synth-like character and the Hindustani flute, bansuri, takes a more prominent spot in the mix. The drop utilises a Kamancheh-like sound which works well. Sahgal’s chopped up vocals, however, do not.

‘Classical Sleazeball’ uses the Bansuri sound in a precise and exciting way during the song’s drop, especially the second time when it’s in double time. Once again the featured artist, Illinois-rapper Cousin Vinny, seems ornamental. With a distinct Hindustani element, this is the standout track of the album.

The EP ends on a very confusing note. The remix of British reggae artist Apache Indian’s two-year-old reggae track ‘Mariana’ stands as the odd one out of the five tracks comprising the EP. The track showcases the duo’s versatility and is a decent remix of a very decent reggae track. However, omitting it would have taken nothing away from the album.

She Did It is a banger and their songs will surely make some feet tap and bodies move at EDM festivals even though it is indistinguishable from the hundreds of tracks, tagged as trap, that are uploaded on SoundCloud every day.