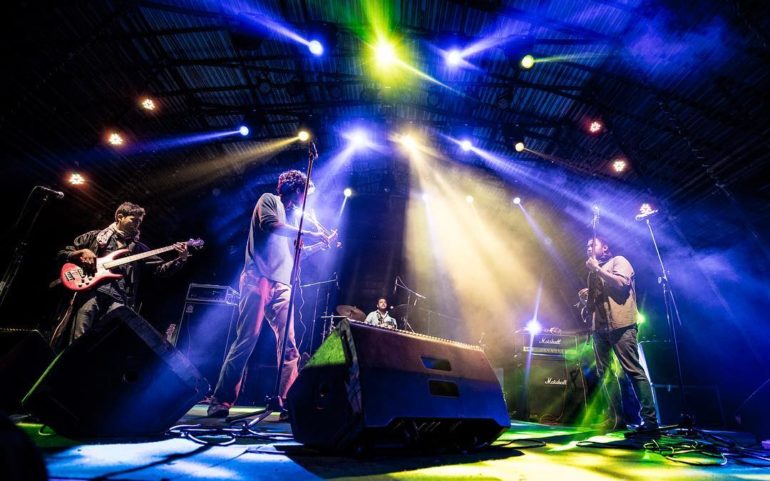 The year is halfway through, and it has seen some of the most interesting independent music in recent times. However, when the quirklords would seek to rank, Joro, the debut album of Bangalore based, cheekily named band Gauley Bhai would find itself right at the zenith of the lot. A band of four Indians that croons in Nepali, Gauley Bhai comprises vocalist-violinist Veecheet Dhakal, bassist Anudwatt Vigya Dhakal, guitarist Siddhant Mani Chettri and drummer Joe Panicker.

The first song, ‘Thupari Udi’, is a terrific demonstration of the band’s irrepressible proto-prog and art rock dialect of music. There’s a mild Raag Jog blossom to the song’s basic melody, which incidentally also makes a cameo towards the sporadic guitar solo in ‘Nepali Ko Rela’. The two songs are similar in its traditional melody structure. The percussions are funky and the violin, charismatic. The lyrics, in turn, are both deeply philosophical. (This writer was provided English translations to all the songs for a holistic understanding, and the writer wishes to add they thoroughly enjoyed the experience). The philosophies and allegories discussed across the songs are lucid, and relatable, which incidentally was what had made acid rock exponents The Doors’ songs last for all the years that they have.

‘Joro’, a similarly veined song has an inimitably Nepali melody, instantly recognisable in its construct. The orchestration is minimal yet pregnant with sporadic guitar aggression. However, the melody and the lyrical narrative take centre stage in the song. The violin adequately parrots the hook melody leading to a chorus chant-driven, profoundly satisfying conclusion.

‘Sangla Dooby’ starts with a melancholic violin solo, with minor Raag Bhopali influences to proceed to a drawling melody that flows like a lullaby, all while euphonically addressing its rather morbid theme. The song also hosts Veecheet’s most controlled vocal turn throughout the album. His evocative crescendo towards the end renders the song wholesome. ‘Bhaari’, poetic in its words and jazzy in its orchestration, is the right kind of sombre in an ocean of vintage psychedelia. Veecheet’s voice aids the intermittent recitals with its natural nasality.

‘Ghamandi’ is an all-round cracker that exploits every member, particularly guitarist Siddhant Mani Chhetri. The lead stringer is top-notch, emulating the absurdist transitions. The song, longest of the lot, derives its personality majorly from the violin portions, which accords it a unique soundscape.

‘Tallo Gaonko’ is an ambient, soft-spoken ambivert of a song, gentle on the ears and soothing to every other sense that might want to indulge it. The song oscillates between soothing low notes and rousing calls for attention with the dexterity of a seasoned manipulator. The versatility of the album rests mainly on this very ability to manipulate moods at will rather than a musical diversity. The ambition is simple and vivid. The lyrics might not be demographically potent, but haven’t the best quotes on the internet already established that music knows no language?

‘Mo Ko Lai Diu,’ is an uncharacteristically peppy composition, with its experimental use of percussive claps, Siddhant’s guitaring is spectatorial yet holds the song together, acting as a rock-solid spine.

‘Morau,’ like ‘Sangla Dooby,’ commences with a violin solo, and remains the star of the song upon every appearance. The song, penned like a requiem speaks of a funeral and has a rather enchanting chorus act, with the vocalisation of the chorus being decidedly cleaner than the lead’s, which considering the band’s affinity for the quirks, seems quite intentional.

Then ten-track album, albeit consistent, does have a star, a song that might help fetch the niche band the popularity and acceptance it very dearly deserves. ‘Simrayo,’ is everything the band wishes to achieve and more. Taking its own sweet time to kick in, the song is an achingly exhilarating tribute to the late 60s pioneers of multiple genres that would come to be modern progressive rock as we know it. The song’s first bridge, for instance, is the kind of stuff one would expect mostly to feature in a Syd Barrett song, a man whose soul seems to haunt the album in its entirety. The song, replete with subtle breakdowns, well-timed rhythm shifts and a terrific turn by Vicheet on vocals might remind one of the works of King Crimson for its sheer audacity to dream orchestral possibilities. Choosing the perfect foil, the song ends with a brief violin piece. It would be a travesty if this gem doesn’t feature in year-end lists of best indie songs of the year.

Three West Bengal boys and a Malayalee lad might bond over communism and their shared love for seafood, but the folks at Gauley Bhai had a greater cause to attend to- to produce sensational music in Nepali, a language and cultural diaspora that desperately await an entire nation’s basic, humane respect. Music transcends, says another internet quote. Apna Time Aa Gaya, the Gauley Bhai has announced with a mic drop.