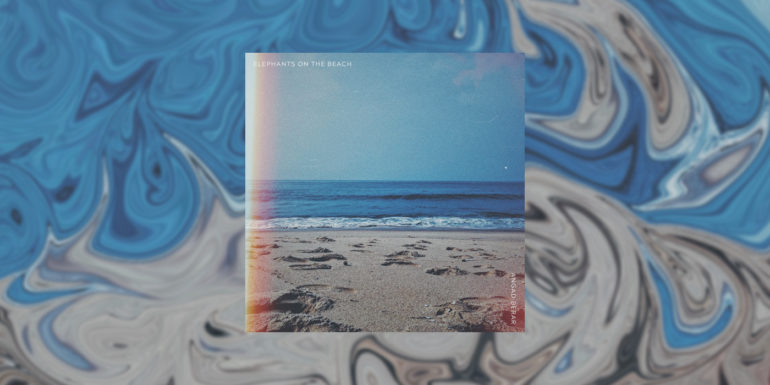 The mere mention of Goa evokes either wistful remembrance or a gag reflex, depending on your proclivities. All things considered, a trip taken to and within Goa is always memorable. Angad Berar looks at Goa, the beaches of Anjuna in particular, as his prime influence on his debut album Elephants on the Beach.

A mostly instrumental effort, the only vocals come in the form of spoken word from psychedelic luminaries like LSD synthesiser Albert Hofmann and spiritual healer Mooji, additions made to lean into the trippy nature of this album. And it is trippy.

The album pushes guitars to the forefront as the primary narrative device. On opener ‘Hazy Light, Sunlight’, a foreword on LSD by bike enthusiast Albert Hofmann precedes a honey-soaked guitar melody, evocative of Khruangbin’s release a little while ago. Berar chooses the guitar as his tool for cinematic expanse, a motif the repeats itself through the record, in tracks like ‘Divide’ and ‘AstroKnaut’. The guitar is also given leeway to escape into freeform on occasions, the bass and drums being steadfast and centred.

The album’s longest track, ‘Astroknaut’ clocks in at sixteen minutes switching up the tempo into a krautrock romp, channelling seminal bands like Neu! and Can. Making full use of his delay pedals, Berar saturates his signal, throws it in reverse, envelops the listener in a blanket of crushing noise before throwing open the veil, letting the light of heady organs lead us back to the refrain. A dynamic and shape-shifting track, ‘AstroKnaut’ is the furthest Berar reaches on this record.

‘Svara’ is next: a two-minute breather of drop-tuned guitar, evoking a timbre reminiscent of didgeridoos but without the apparent annoyance they bring to the world. Drums and bass return on ‘Moonlovin’, the motorik beat swapped for a shuffle, a multi-octave guitar melody leading the charge. This is also around the point where the album experiences a sense of fatigue, the repetition diminishing in its returns.

‘Dreamstate’ seems to reiterate this fatigue. The song is a nearly seven-minute heady soother with Berar using a repetitive guitar line and bass pulse as a foil to run up and down his scales, clearly not attempting to reinvent the wheel. Reaching for a little flavour but veering towards camp, ‘Anjuna’ is a Hindustani-tinged tune, tabla et al. While probably the most “Indian” sounding song, it sounds more like a Kula Shaker outtake – you can unpack that however you like.

On ‘Between Dione and Mimas’, Berar sets his sights beyond terra-firma, firmly lodged between two of Saturn’s moons. The tempo returns to the plod of the first few tracks, the bass being the dark horse it has been throughout the album, the fulcrum. The outro switches the beat up with a more futuristic hi-hat heavy rhythm, a move uncharacteristic to the rest of the album.

As it fades out, there is the question: is this album for longer or shorter attention spans? The song lengths are discouraging, but only when noticed. ‘AstroKnaut’ is sixteen minutes long, but has enough going for it that it’s barely noticeable. The repetition helps alleviate that dilemma; the listener is left to soak. The ambient, easygoing nature of the record contributes to its listenability, although someone with tailored notions of verse-chorus-verse might not gravitate as readily. It probably should have shown up later in the album, as a more accurate centrepiece.

The instrumentation is self-indulgent at times, the tracks have moments where they feel aimless. Excessive guitar noodling has a shelf life, and there are some instances where one is left going, “Okay, and then what?” The songs feel more listenable as aids to other tasks. Clean your room, read a book, write a thing to this music.

This isn’t to say the album is merely background noise; this even alludes to the cinematic payoff of these songs. Concentrated listens do evoke vast swathes of land with a lone figure strolling through, can’t lie about that. While not particularly stratospheric, it’s not for lack of trying.