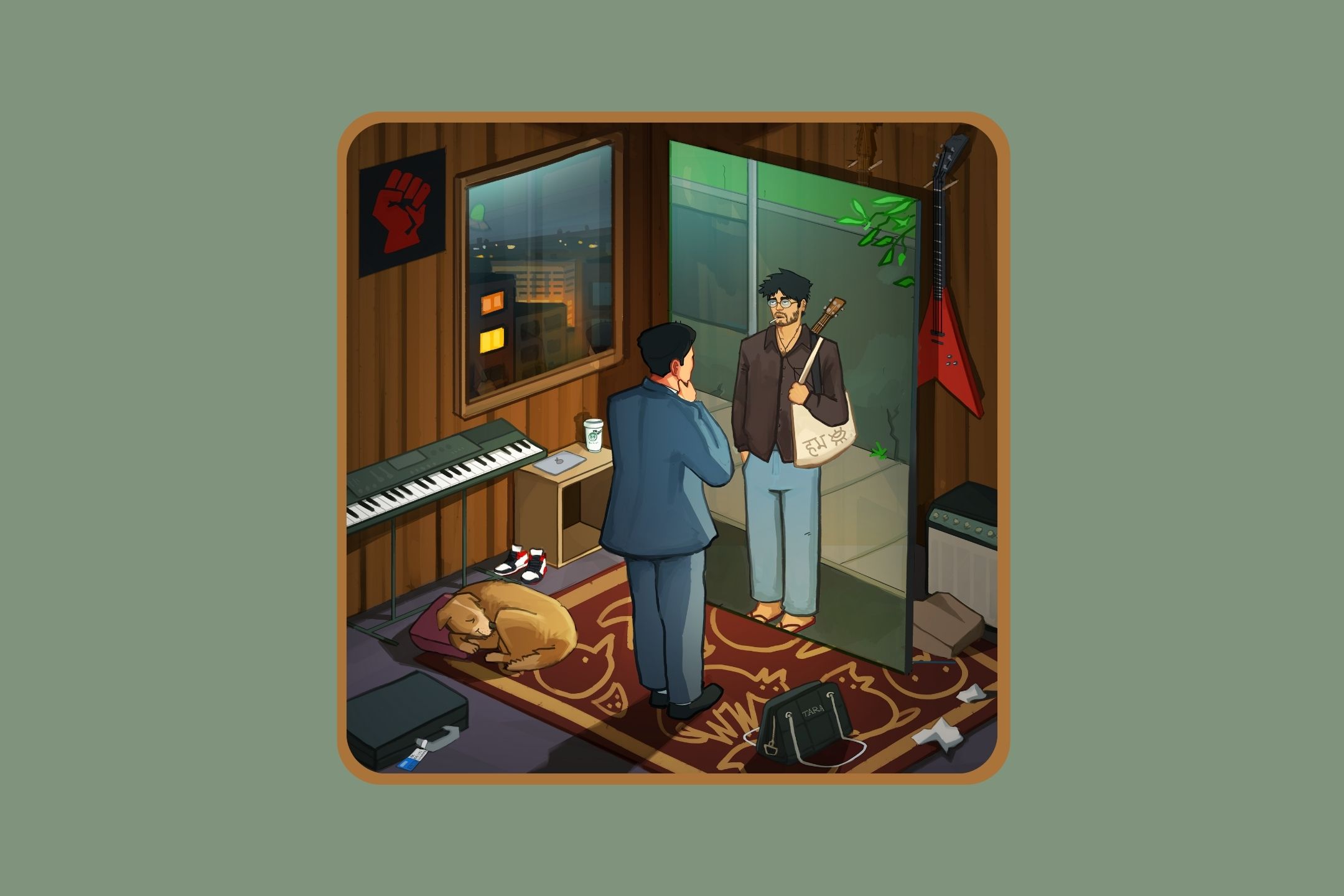 Over the last few years, the New Delhi-based funk/jazz fusion band The Revisit Project have brought out an impressive volume of work. They started off as a cover band that revisited old Bollywood gems. They started capitalising on their potential of creating original music with their debut EP Here We Go in 2017. They followed it up by double releases in 2019 Brown Man’s Funk and Born in Delhi. The band continues on its journey to tribute the eternal world of jazz/funk fusion, sprinkled with a hot take for lyrical supremacy in every venture. Capitalist Musician with a Left Leaning Avatar is one such addition to their inventory, one full of engineered skill and discerning satire.

The opening track, ‘Aap Broker Hain Ya Party?’ aligns with the band’s signature funk principle, ever-present in most of their work. The 4-minute-long instrumental preps the listener for a certain voluminosity that surrounds the record. Although repetitive, it’s the tactical shifts in compositions at regular intervals in the song that make the overall listen, invigorating. Abhay Sharma’s saxophone lead seems to be the driving force of the funk piece, followed closely by the abiding wah-wah of the guitar and the snazzy drums and bass lines.

Add vocals into the mix, and that makes up the track ‘Straight Through’, wherein Vrnda Dhar’s sultry voice completely shifts the focus, rendering it more of a neo-soul venture than a jazz one. A lot of low-end detailing can be heard in the bridge/outro of the track, which offers a dazzling combination of synth arrangements and syncopated bass.

The playful atmosphere is soon taken over by a more laid-back, introspective one with the onset of ‘Vibes For Tribes’. The six-minute score lays down a thorough, spacious foundation that allows for a friendly game of improvisation between the saxophone and lead guitar. The technique bends into the more traditional roots of jazz, and this spontaneity spills into ‘1-4funk’ which features guitarist Siddharth Gautam. Siddharth’s well-known guitar tone takes over the bridge, offering a rock jazz solo that’s almost an Easter egg for the listeners, with its strategised, careful placement, right in the middle of the album.

Born out of the pandemic era, the re-recorded version of ‘Locked Away’ talks about the experience of being locked up in a room and motivates the listener to face the challenges it brings. One for grooving, the track features impressive vocal delivery by Vrnda and a bridge filled with improvisations by the band’s newest Rythem Bansal.

Released in 2021 as a single, ‘Miles to Coltrane’ features the band’s favourite singer to collab with from the city, Chetan Awasthi aka Chezin, on the vocals. He also appears on the title track and a few of their previous releases. Narrating a love story, ‘Miles to Coltrane’ was the band’s first ballad, tracing connections between the two legendary jazz artists. As the band deliberates, “The song takes us through the beginnings of a relationship and metaphorically compares the camaraderie and affinity that the couple share for each other to the legendary duo of Miles Davis and John Coltrane.”

Lyrically, there is no mention of anything political until this point, but the title track makes you question the moral philosophy behind every track you’ve heard up till now. ‘Capitalist Musician with a Left Leaning Avatar’, through a barrage of references out of the blue, is a satirical commentary (or rather, an internal monologue) on the guilt that he feels being a professional musician—his means to earn a livelihood being consistently right-winged and hence, in direct conflict with what he often aims to preach through his music as an advocate of social equality, via his ‘left-leaning avatar’. It justifies and strips bare the hypocrisy of being a left-leaning capitalist in today’s society—a sentiment many young socialists trying to earn their keep in the conventional way, can possibly (and unknowingly) relate to. Chezin’s sharp and self-assured singing style captures the naked satire of the track fantastically, reminiscent of jazz-rock acts like The Reign of Kindo. As a whole, however, it stands alone as one of a kind, an assemblage of various influences at a maximum.

The record shows itself out on a differentiated note, showcasing Delhi-based classical sarod player Rohan Prasanna’s proficiency with the instrument, on the last score. The interplay between the saxophone, sarod, and the guitar outlines the track with an exceedingly playful essence. It would be incredibly easy to imagine yourself in a live setting of the band’s performance of ‘Jog’ if you wanted to.

That being said, the experience of listening to this album from any corner of the world is a memorable one, thanks to the intricate compositions, virtuosity of the individual instrumentalists, and undeniably immaculate production. It’s safe to say that The Revisit Project has had a considerable impact on the proliferation of the jazz/funk genre in the independent music scene. With these factors as their sword and shield, there’s much excitement to predict the kind of sonic landscapes they might conquer next.