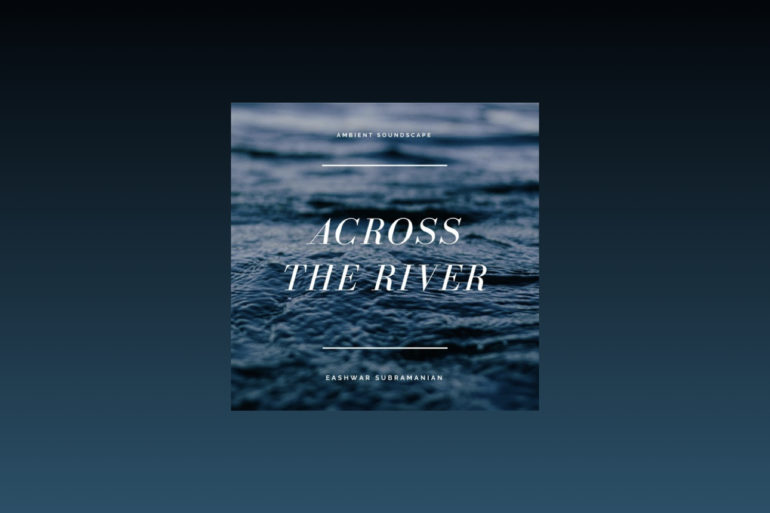 Eashwar Subramanian is the answer to anyone aspiring for greatness but is terrified of failure. The Bengaluru-based market intelligence official opens the floodgates to his creative passions in his downtime to compose music not only for his own albums but also for short films and plays. His interest in Carnatic classical music reignited after 23 years which, along with his studies of western classical music is seen across his output. He also cites a broad array of influences such as Ludovico Einaudi, Fabrizio Paterlini, Bonobo and Brian Eno. He has also released 3 EPs and an album so far. His electronic music piece ‘Electronic Gharana’ has been selected by Manimal Records, for sync and licensing opportunities.

His latest release, Across The River, is a 27-minute long project consisting of a collection of six instrumental vignettes. The careful assortment of synth harmonies flows within the spacey soundscape that Eashwar creates. The music on this album almost feel cinematic, like the soundtrack to a magnificent drama film presented in glorious 70mm. Eashwar challenges the boundaries between genres by skillfully blending seemingly unrelated genres of music. He will present us with some swirling synths only to later introduce sounds from folk music, IDM and wherever else his hear takes him. The opening track, ‘Offering at Dawn’, is a soothing blend of acoustic wind instruments and ambient electronica. The use of repetition is extremely effective to immerse the listener into the rustic utopian soundscape.

‘Constellation’ is a seven-minute ethereal journey. It tiptoes in with its restrained yet swirling synths but progressively gets denser and more complex towards the end. The production on the track makes every element of the song shine on its own. The restrained use of synths makes it a meditative and serene experience. Many musical ideas on the album play with the look and feel of water. For example, the fluid synths on the title track gently wash over the stirring strings and patient percussion.

Eashwar also incorporates classical music into the mix like on ‘The Ancient Relic’. The blend of classical music and electronica makes for a complex yet soulful and melodic experience. The track is lavish with its use of chimes, synths and galloping hi-hats. The surprisingly groovy ‘Constant Measures’ ventures into dance music territory after a tense buildup from a low key intro. The track is objectively a stark contrast to the other songs but Eashwar manages to blend it in with the rest of the album cohesively. The album’s penchant for repetition falls a bit flat in the closer, ‘Templeway’. The track is admittedly hypnotic with its rattling hi-hats and steady yet understated beat. However, Eashwar doesn’t introduce any new ideas as the track progresses and hence the repetition gets a bit tedious.

Across the River is a perfectly well-rounded set of bold ideas. The seemingly random blend of genres works out in flying colours every time. Eashwar clearly prioritizes atmosphere and ambience among all else on the track. Within each, carefully constructed atmosphere lies an extremely enjoyable concoction of musical influences from all over the globe. The album is bold but in a safe way. The tracks come together to create a whole that is far greater than the sum of its parts. The project is short, crisp and to the point. Where his passion and talents take him next is definitely worth charting.