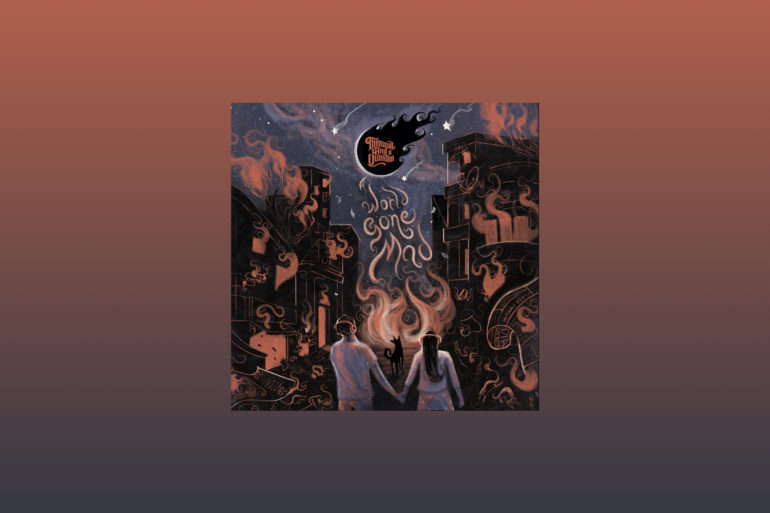 Eight albums and more than two decades in the game, Bangalore’s rock heavyweights Thermal and a Quarter (TAAQ) started offering new material like ‘World Gone Mad’ (2017) and ‘Leaders of Men’ (April 2019) and most recently ‘Stone Circle’ before they fully unveiled their latest record, A World Gone Mad.

What these first singles denoted was more or less business as usual for the band – Bruce Lee Mani was cheeky in his delivery of irony-heavy lyrics and didn’t falter in his aim when he breezily sang, “We were leaders of men/Bastards now and then.” The title track too stayed true to TAAQ’s bluesy, jazz-informed songwriting. But when ‘Stone Circle’ featuring Swikrity Singh dropped in September 2019, it showcased TAAQ at their most emotive like few times before. The slow, celebratory song was lush and very rooted in reality and almost anguished until you get to the chorus.

On A World Gone Mad, if the title doesn’t suggest it yet, the artwork by Dangercat Studios’ Sonali Zohra ought to tell us that all is not well. Hurtling towards fiery doom, two people are seen with their headphones on and this is likely the quartet’s way of saying, “At least we have music and each other”. The 10-track record arrives five years after The Scene and No Wall Too High, which had their own experiments in mood and sonics. As much as it may seem to some that TAAQ had nestled themselves into a predictable sound that combines jazz, blues and rock, A World Gone Mad proves otherwise.

The prominent attitude on this album is fury but also offering comfort. Songs like ‘Where Do We Gotta Go Now’ are instantly menacing, while ‘Believe It All’ has that trademark vastness, featuring roomy drum work from Rajeev Rajagopal and shimmering guitar work from Mani and Tony Das as there’s a treatise on fake news and propaganda. Mani beautifully couples his guitar and vocal harmonies on the impassioned ‘Distance’, and there’s the wonky, odd-time employing ‘Lopsided’, which is an example of how TAAQ are trying to provide an additional layer of interpretation – of how the themes of the song are reflected in their songwriting elements.

The album graduates sleekly to the clear winners on the album – ‘Unbelong’ is painfully wistful about one’s place in the world, grappling identity crises, awash in heavy-footed rhythms and riffs and a bit of dissonance. While ‘Unbelong’ is almost despairing, ‘Stone Circle’ is TAAQ’s reminder that there is, in fact, some people you can lean on for unconditional support. After the upbeat ‘Leaders of Men’, there’s an unshakeable, wildly curious track like ‘N.F.A’, which satirizes pseudo-nationalism. Mani’s voice intonation is almost humor-inducing if he wasn’t so much lifting the veil off the senseless ways of world leaders with lyrics like “We must make this land great again/We invented zero /And the stone-age airplane.” It’s a groovy, gravelly rock song punctuated by strange guitar melodies and a fist-tight bass and drum combo.

TAAQ settle back into the overarching mood of introspection on ‘Saved by a Laugh’, the closing track. It’s bathed in reverb-heavy guitars, and Leslie Charles’ bassline breaks the mood, transporting it to the brighter side. Indeed a return to the idea that even when the world might be at a low point, we’ll look for something to hold near and dear. And at this point, A World Gone Mad will do more than enough.