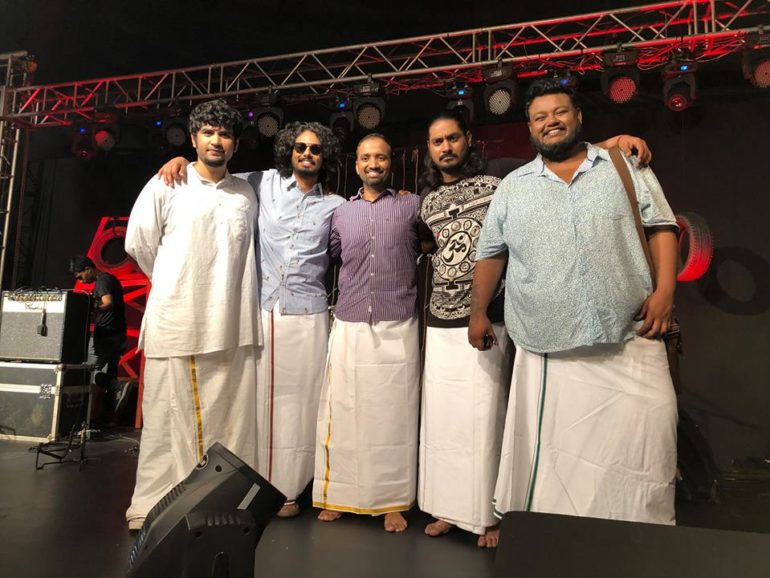 Music today is used not just as a medium of expression but also as a proxy for initiating public discourse on these expressions, whether it is political, social or even environmental. With themes ranging from love to war, the Iyer Project’s new eight-track debut album promises to ideate upon a welter of concepts served with a fusion of Carnatic influences. They sing in everything — English and Hindi and Tamil. “This album is our great revelation as a result of us maintaining our sanity and sticking together as a band all these years.”, they state. The band also did an incredible track-wise song art revelation series on their social media with some talented artists.

Hailing from New Delhi, the Iyer Project is out with their latest and greatest debut The Epiphany of Being Sane. Donned in ‘mundus’, the alternative rockers have been trying to carnatacize rock since early 2014. The core group features vocalist Chandramouli Chandrasekaran, Ashvin Venkatesh and Ananth Venkatesh on the guitar, Sameeron Chatterjee on the drums and Himangshu Yadav on the bass amongst other session musicians.

The album opener, ‘Mr. Funkesh’, is a modern play on the Carnatic classic ‘Mahaganapathim’. Chandramouli sings of rat races, guiding lights and higher goals as our man Mr. Funkesh embarks on a journey of discovery. Earworm alert, the backing melody on this cut is incredibly infectious. The second track titled ‘Confused Hypocrisy’ marks a conceptual deep dive, the band getting their hands dirty with more fiery ideas. The track talks about mankind’s failure to walk the talk when it comes to our responsibility to Mother Earth. The next song ‘Vishwaroopam’ features some of the best guitars on the album. Angry and unrelenting, the track is about you versus the world. What do you do when you feel like everything around you is anchoring you down? We rise.

On the first Hindi track on the album, ‘Jal’, the band beckons our attention towards water conservation through an anthropomorphisation of water. On this soft number, water’s own voice sings of its importance and beauty. The next track ‘Boondein’, also touted a crowd favourite, is arguably the band’s finest rendition on this album. The opening bass tugs at the heartstrings and the strings further elevate it. The track quick evolves into an energetic number alike to its companions. The next track ‘Rockuvamsa’ is the band’s love-letter to the ever melodious ‘Raghuvamsa Sudha’. With a rock take on this classic, one can’t help but groove to its tune.

The penultimate track, ‘Echoes Of Liberation’, is also the first single released by the Iyer Project. It is also the longest track on the album. Describing the song, the band states, “this song can be divided into three major parts, the first being internal conflicts of a soldier questioning the reason of war, the second is his thoughts when he’s at war and the final being redemption.”. On the album closer ‘Afterlife’, we enter a state of ultra celebration. On this absolute maximal and meta groovy track, the band draws up a picture of the party that is after-life. What if all it is is just a huge celebration doused in music and dance, they ask. This is a banger of a track that is sure to be an encore at any performance.

The Epiphany of Being Sane serves as a tremendous kick-start to the project’s career. It shares some ideas very close to the band with an energy that is beyond palpable. Without foregoing their strengths, we look forward to a more seasoned and conceptually cohesive record from the band in the near future.