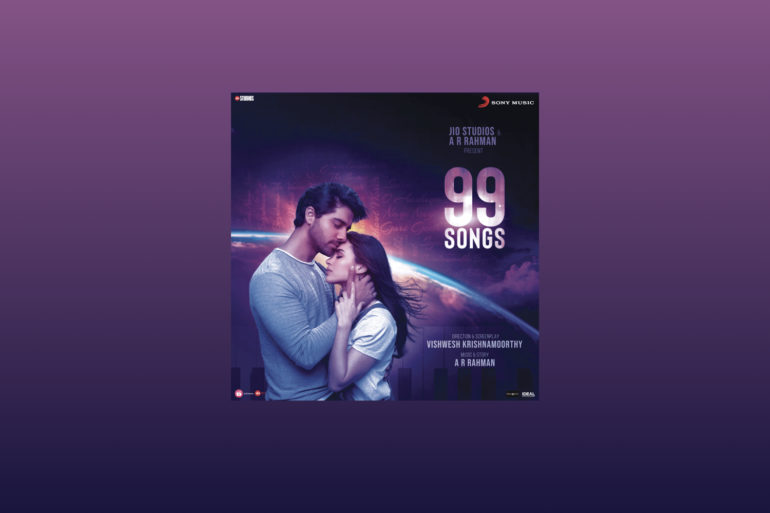 It has been more than four years since the first word on a film scripted, composed and bank-rolled by AR Rahman was out. Titled 99 Songs, it came as no surprise that music forms crux of the movie. It was, at the time, inevitably, evocative of Imtiaz Ali’s Rockstar for reasons more than one. Cut to four years later — AR Rahman released the full soundtrack of his production, just a few days ago, well ahead of the movie release.

A look at the number of tracks in the listing already brings a bit of reassuring smile. Fourteen. A glance at the listing also suggests there is perhaps a consistent lead voice, of Shashwat Singh, in 99 Songs, another likening to Rockstar, that featured Mohit Chauhan as the voice.

With that bit of purely nostalgic exercise out of the way, the soundtrack is a fairly impressive collection of genres, moods, and voices. AR Rahman, thanks to he also doubling as a producer, includes compositions ranging an impressively wide spectrum — some, if not all, are likely to find takers in ardent fans and music-lovers alike. The boy-band rock song ‘Nayi Nayi’, the devotional ‘Sai Shirdi Sai’, the classical ‘Gori Godh Bhari’, the dazzling jazz ‘Soja Soja’ and more.

Perhaps ‘Nayi Nayi’ is the only composition that is throwback-of-sorts to Rockstar (in the first minute). It is not surprising given the rock band theme of the song. Warren Mendossa’s fantastic guitar and Ranjit Barot’s drums form the song’s turf and a brilliant lead up to the catchy ‘Nayi Nayi’ segment. It is delightful to note the tabla mix coming out of the blue in this setup. Rapper Shiv throws in the inevitable MC Sher to cater to Gully Boy hangover in ‘Veere Kadh De’. The song opens with a version of AR Rahman’s ‘Maaro Maaro’ (Boys) and uses a fleeting Punjabi bridge to morph into the rap it is.

Shashwat Singh finds his best form in ‘Sofia’, easily one of the best tracks of the lot. Guitarist Keba Jeremiah adds his magic to this amorphous, silky, gliding composition. The defining moment of the song is not in the calmness but the storm that follows, pulling the rug-off-the-feet, in the last minute; thanks to a brilliant choral arrangement by Arjun Chandy, and an elated AR Rahman joining, the song envelopes and draws you in.

Male vocals predominantly lead the album, but some of the most beautiful compositions are female solos. ‘Soja Soja’ will surprise those who get lured into its lullaby start. A subdued Shashaa Tirupati and the slowly progressing piano chords in the first minute completely belie the actual jazz drama that follows. Lyricist Navneeth Virk and AR Rahman give Tirupati a line as plain as ‘Soja Soja Raat Ho Gayi’ and let her play with it, roll it and render it with a multitude of colours each time. The song is uncompromising, unrestrained jazz all the way, bursting with life and drama thanks to a terrific Tirupati.

‘Sai Shirdi Sai’ that AR Rahman released as a single nearly two years ago finds way into this album. A wonderful Bela Shende takes us back nearly a decade and a half to Jodhaa Akbar (‘Manmohanaa’) times. AR Rahman briefly joins Shende towards the end in a thoroughly moving harmony. Shende, likely the voice of the lead character’s mother, also sings the serene lullaby ‘O Mere Chand’. Beautifully arranged, the song transports us to the 90s when the composer made such lovely lullabies with remarkable consistency.

The album does have its weak links. ‘Teri Nazar’ rides on a gentle rhythm that easily belongs in the early noughties of Rahman-Gowariker collaborations, but is otherwise lukewarm. The most disappointing act in the entire soundtrack is ‘Jwalamukhi Bezubaan’. Especially the version by Arijit Singh falls completely flat, no flames, let alone a raging fire. Thankfully, the original (movie) version by Poorvi Koutish and Shashwat Singh does have its highs, in particular the ‘thararey’ chorus.

We witness a delightful crossover of singers, a la ‘Ishq Bina’ (Taal), in the classical ‘Gori Godh Bhari’ by Alka Yagnik, Shweta Mohan and Anuradha Sriram. The song is an impressive and thoroughly engaging exercise in vocal arrangement. Like how Meenal Jain and Anweshaa played over and beyond support to Shreya Ghoshal in ‘Banarasiyaa’ (Raanjhanaa), the supporting harmony mixes in and out with beautiful shades here. The song registers high when the harmony catches up with the lead midway through the song; the trio go ‘Meetha Meetha Laage Re’ in unison.

The album has very interesting piano arrangements throughout. ‘Humnawaa’ is exemplary – Armaan Malik’s vocals are fitting and Shashaa Tirupati’s humming is delicately one with the Piano. ‘The Voice Without Words’ is a haunting piece, that takes no time to negate its title, thanks to the words rendered by Poorvi Koutish. The album opens with a lovely thematic ‘O Aashiqa’ by Shashwat Singh. The entire song is woven around the simple tune of the ‘O Jiya Toh O Jiya Toh’ phrase. There is a point midway in the song when it latches on to ‘Sai Shirdi Sai’; subsequently transforms into a moving ode to the mother. AR Rahman taps the essence of ‘O Aashiqa’ in the arresting instrumental ‘The Oracle, ‘ which, fittingly, closes the album.

The album overall succeeds in registering coherent, nostalgic yet refreshing sounds, and is one of AR Rahman’s most definitive works since 2015.

I’ll put a bullet through your heart…..if you don’t love me