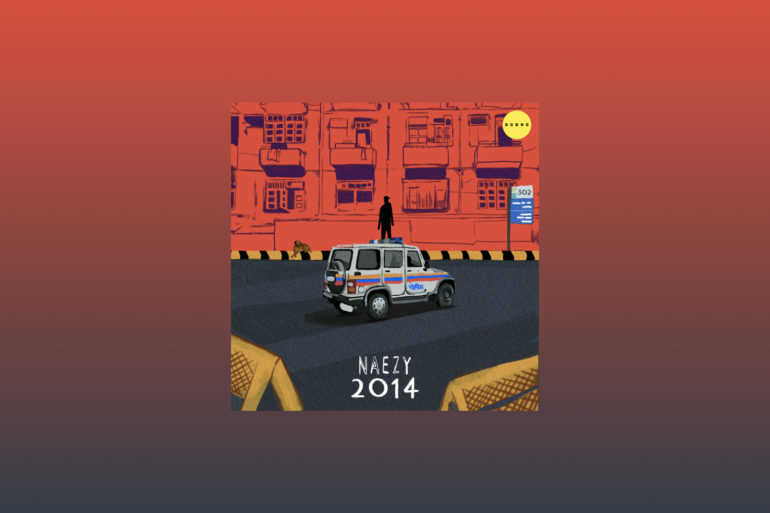 The year was 2014 – a major power shift was brewing both on the streets of Mumbai and at the halls of Delhi’s Parliament. While the lofty avenues of Indian politics marked a new leader at the helm that year, the gullies of Bombay 70 gave birth to a fearless young wordsmith. Six years later Naved Shaikh aka Naezy turns the clock back to that fateful year and what unfolded next, on his new release, the poignant and powerful 2014 EP.

While on his early 2020 debut EP Maghreb, Naezy was paying homage to the West (al-Maghrib in Arabic) and his rap gurus there, on 2014 EP, the Gully Rap pioneer looks closer home. It takes just four tracks and nine minutes of time for Naezy to present a raw, unapologetic, almost-journalistic report of Mumbai’s neighbourhoods where crime, deceit, opportunities and his bantais roam. This is Naezy at his grittiest, shedding light on the grime and glory of his surroundings.

Nostalgia and introspection play a major role throughout the EP. The title is a clear nod to the year Naezy arrived in the Indian hip-hop scene with the menacing ‘Aafat.’ The track sparked a revolution that led to the phenomenon that hip-hop has become today, across the country. Post ‘Aafat’ the years of hustle that was brewing in the gullies of Mumbai started seeing recognition. A slew of emcees arrived as hit rap singles were dropped with more frequency, a Bollywood blockbuster was made and boys from the naka were now garnering global attention.

But Naezy hasn’t forgotten the toil and struggle when he reminds “Asal hustle hai yeh iPad laga doon channi” on the opening track ‘302.’ The Indian Penal Code 302 deals with murder and Naezy uses the law to refer to the negative thoughts in his mind that he is slaying. When emcees who followed his footsteps were soaking in the spotlight, Naezy was miles away from it on a long sabbatical due to family reasons. But after an eighteen-month long exile and a debut EP later, Naezy sheds his doubts and makes his claim at the Indian rap throne.

On the title track ‘2014’, Naezy takes it way back to his early days over a sonic style reminiscent of hip-hop’s origins. Producer and frequent collaborator Karan Kanchan throws in an old-school stripped-down New York street and b-boying inspired beat that could have even rocked an Afrika Bambaataa or a Run-DMC gig.

On ‘Mehfooz’ Naezy ropes in Manchester-based electronic DJ Compa on production duties. Over his dubstep led sounds fused with a flute sample, Naezy talks about his unchanged demeanour in an ever-shifting scene.

The EP’s most hard-hitting track though is reserved for the end as ‘Awli’ arrives firing blazing verses. Built on a sinister G-Funk era-inspired beat, Pinaki Rattan aka Phenom provides the Gully ace with the perfect foil for a gangsta rap masterpiece. On the EP’s closing piece, Naezy takes you back to his roots, the infamous gullies where he grew up, the bantais who fell to a life of crime and how he’s finally back home.

Way back in 2014, a young Naved Shaikh spoke about the raw reality of his world on ‘Aafat.’ No one, and not even Naved knew what lay in store for him and as he vented, “BSc ki Maa ki A***h mujhko rapping karna hai”, the frustration and uncertainty were palpable. But six years and a story worth a lifetime later, Naezy can look back at the journey with pride. The original Gully Boy is now the scene’s glorious master.