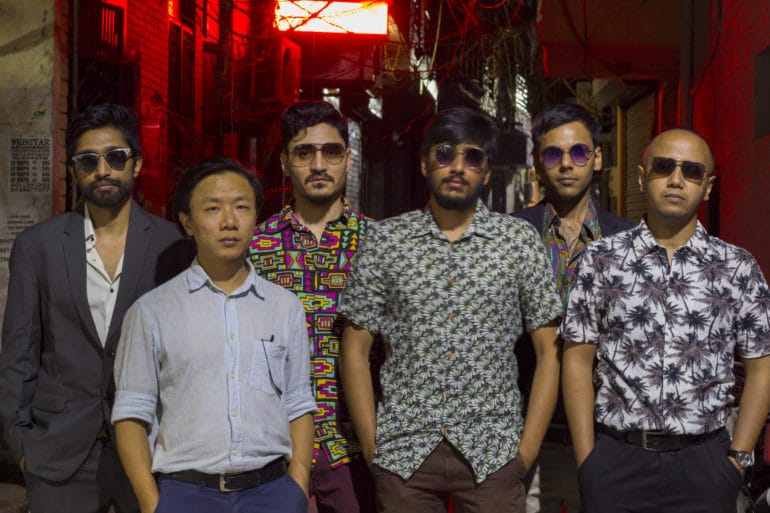 108 Pilgrim delivers a fun, strappy debut with Time And Again

Post-punk and garage rock act 108 Pilgrim has doled out its debut album Time And Again. According to the New Delhi home-grown outfit, the album chronicles a narrative through the city’s crazed pollution and chaos. The band has previously put out tunes that blend deeply personal verses with a hardy story-telling narrative. Their music is the harvest of many jams and happy accidents.

The band features Arun Cherian on the vocals, Mebanshanbor Marbaniang on the backing vocals, Mukul Menon on the guitar, Nishant Kumar on the keys, Wate Zhiemi, and Yasir Syed on the bass and guitars. They released their first EP Saturnalia in 2015 and went on to play many shows across Delhi, as headlining acts, for colleges including SPA and CEPT and festivals like The Ziro Festival, Street Art Festival, North East Festival, and the Indie Art Week amongst others. 108 can mount boundaries without settling into any single genre, and credits this to a gamut of influences, from new-wave to post-punk to alternative rock.

Following several moniker metamorphoses, 108 Pilgrim definitively settled on their third and final name. The band was called Shoplift in their pre-2012 era, a name that was canned as the band matured. Having rolled with Pilgrim for a while, the band appended member Nishant Kumar’s flat number 108-D befittingly having spent numerous hours there on the new release. Time And Again can be characterized as a record of 108’s personal experiences in New Delhi as they tried to find their place. It was recorded in multiple sessions from 2015 through 2018. Three of the tracks are taken from Saturnalia while the rest were recorded at Depot Records, New Delhi.

Like any good rock and roll band, the boys at 108 believe in the emphasis of the groove factor. Opening track ‘Transmissions’  reverberates with a snappy hook that serves well in initiating an unsuspecting listener into its clout. ‘We Could Get By’ starts with a slapping bass that is terribly infectious. Bootleg renditions of the track were called ‘Go’ back in 2014 and remain as one of the band’s most popular live tracks. The album eases itself into a slow-burning number, ‘Special Case of Love’. Notably, Arun Cherian’s vocals are the most earnest and suave on this track.

The fourth track ‘High Hopes’ cranks up the fun with thrilling riffs and foot-tapping beats one can’t help but move to. However, it does fall flat once the initial boom wears off. The next track ‘Lovedog’ was written with Omar Ahsan and has been lurker among jam sessions for years. The band has been performing the tune for about a year now and it’s the latest crowd favourite among veteran fans and gig gatecrashers alike. ‘Time And Again’ is the titular track from the debut, written out as an unending cycle of love and loss that is experienced over multiple lifetimes. It sounds truly complete in their slightly lower tempo renditions where the keys form a central piece.

Another notable number is the album closer ‘The Dead Can Dance’. Befitting to its slightly morbid title, the track rises to a macabre zenith that resonates through and through. The Indie influences of The Clash to David Bowie to The Strokes are discernable and thorough across the 44 minutes run time of the LP. There are times, a number more than passable when the album risks saturation in its sound. Notwithstanding, 108 Pilgrim sticks to its guns and has put out a seemingly staunchy debut. They do what they do best, ensure that their listeners have a rollicking good time.