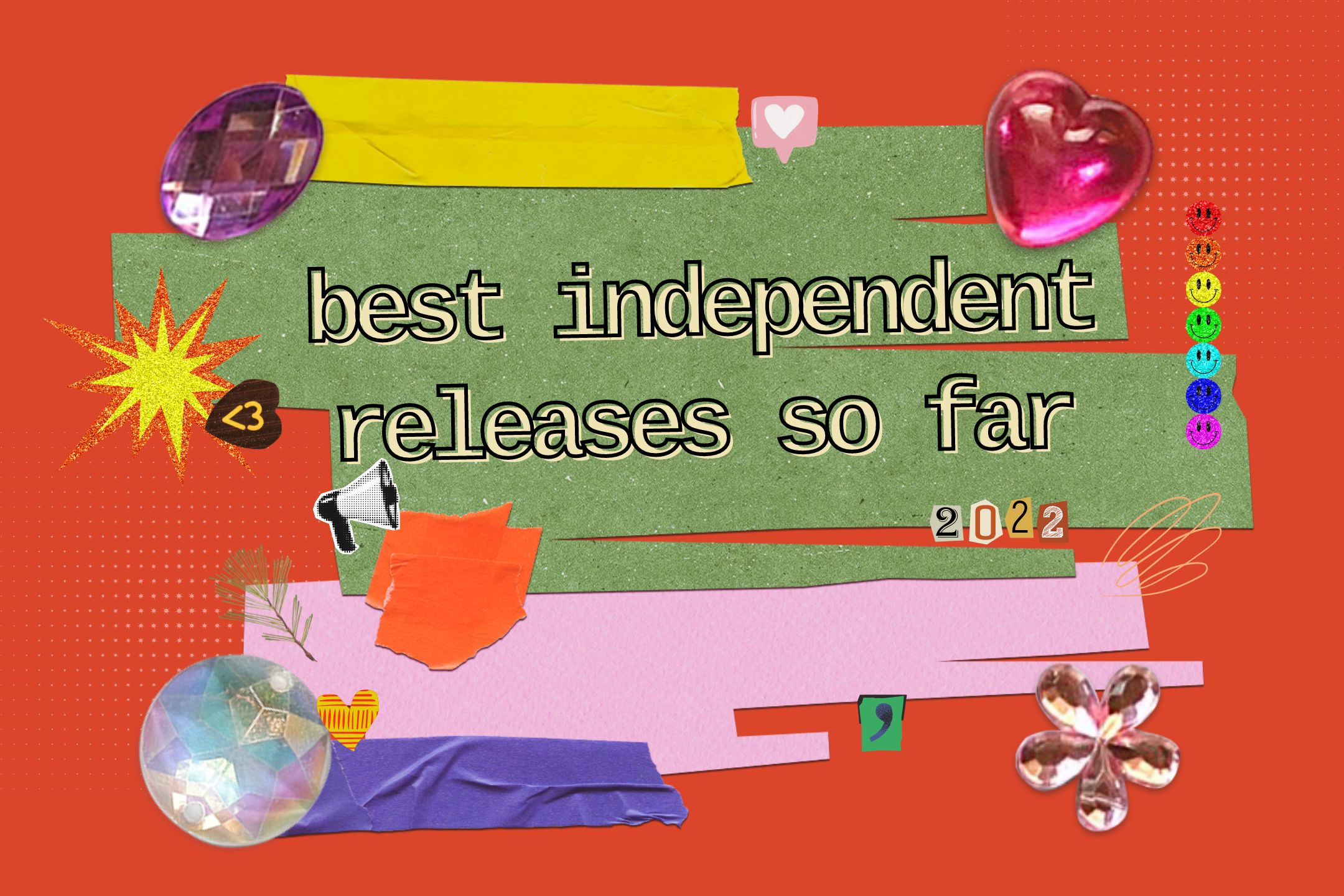 Best Independent Releases of 2022 so far

The year 2022 is a year of hope. Though the bleak macro conditions continue to prevail globally, the breakout independent musicians who flourished during the last two years now have a somewhat ripening scene to take their music to next level. Independent music continues its unrelenting growth despite the major labels’ attempt to co-opt the ecosystem. Here are the top ten releases of the year so far, featuring musicians who choose to swim against the tide and remind us what being independent truly means.

Chandigarh’s Navdeep ‘Nav’ Singh and Harsimranjit ‘Lucky’ Singh from Kru172 have been at it since 2008, rapping in Punjabi and a bit of English in true indie fashion. They haven’t been so much under the radar as they have been slept on by the rest of the country. Their new album—emphatically called Chandigarh’s Hottest Duo—moves towards changing that reputation. The deft, booming beats are a delight for anyone who loves old-school hip-hop and the lyrics are often celebratory of just how different they are in the world of Punjabi hip-hop, where big labels and a million streams are the benchmarks. There are English hooks and a formidable double rap attack by Nav and Lucky, driving home the point across 11 songs.

In staying honest about their roots, best heard on songs like ‘Repazent’ and ‘Saade Jeha’. A couple of prime cuts across moods are ‘No Thanks To You’ and ‘Chillin In The 172’—the interplay of boom bap and English pop hooks taking us back to a different era of American hip-hop, now energised by stories from two Chandigarh boys.

The debut full-length release from the Bengaluru-based duo is a feverish masterclass in arrangement and design. Stylistically diverse, Meet Me Halfway makes great use of 808s, crafting a menacing undertone throughout. The record is replete with hooks, held together by sticky refrains that guarantee a repeat listen. Producer Clifr, whose proficiency extends into the instruments he assembles, layers this record with a thin film of grime and dirt that exists in perfect harmony with Tintin’s verses. Singles such as ‘Hot Summer’ and ‘Restless’ exemplify of the diversity on offer, yet deeper cuts like ‘Jhamela’ and ‘rockpaperscissor’ are the album’s highest highs. The two artists at the top of their game throwing everything but the kitchen sink.

Welcome Home by Murder in Space, in all honesty, is one of the most exciting albums to have graced the independent music space in some time. The 6-track EP—the band’s first official release—in its condense structure seems to have struck gold and found home for the band in post-rock. Charting every peak and trough between tune and tempo, the album is a heart-rending parkour, as bold in its experimentation as it is nimble in its beauty. The electric guitar, ever so occasionally accompanied by percussion, churns the soul—its power made all the more keener by its solitude. It is simply impossible to single out tracks in a record that passes with unassuming clarity. Groovy yet steeped in emotion, it is not just a great instrumental album; it is a great album, period.

With warm vocals that soothe as much as they evoke, and perfectly complementary arrangements, Saptak Chatterjee’s Aaina could not but make it to this list. Saptak’s vocals reign supreme throughout the 10-track album, with Vipasha Malhotra joining forces for the last track—a duet version of ‘Yaadein Banate Hai’.

The classical basis of the album is more than apparent, not the least in Saptak’s impeccable vocal modulations; however, the lyrical and thematic content ensure that the style does not predominate. While a track like ‘Kaam Dhaam’ is fast-paced and lets itself be powered considerably though percussive progression, those like ‘Yaadein Banate Hai’ and ‘Kinare Pe Khada’ are beautifully languid. Almost immediately after, ‘Sun Zara’ reminds the listener of the immense classical bedrock without which the album might otherwise sound flaccid. With something for every listener, Aaina is an unmissable treat.

New Delhi-based alt-indie group Begum released their album, Are you ok? back in March. Given their musical prowess and popularity, any release was sure to be received with fanfare. But Are you ok?  being five years in the making lent itself to buzz like never. The 10-track project featured previously released singles such as ‘Maybe Baby’, ‘Better Person’ and ‘Meena Lisa’, alongside fresh releases like ‘Must Get Out’, and ‘Ten Years Later’.

The album has a track for everyone, be it in sound or writing. Exploring themes like heartbreak, identity, love, and everything in between, the soundscape, too, covers everything from alternative pop to indie acoustic.

Just to be clear, every track is not a hit. But, as per Begum’s past admissions, they’re not trying to make hits, are they? One may not relate to or like every track, but you’ll definitely be left inspired by their lack of self-consciousness and their ability to stay true to their musical vision.

5. The Revisit Project – Capitalist Musician with a Left Leaning Avatar

New Delhi-based jazz/funk group, The Revisit Project, were always going to grab eyes with an album titled Capitalist Musician with a Left Leaning Avatar. But few can live up to the hype of a quirky name. This group did it.

Replete with skilful jazz arrangements, intricate constructions of music, carefully crafted collaborations and a deliberate homage to the world of funk and jazz we all love so much, the 8-track album makes for a breezy listen.

No, really, it takes literally zero effort to listen to album as slick as this one.

Sure, the name of the album suggests otherwise, but politics, exploration of identity and dialogue in music has never felt like such an exciting prospect; at least in today’s world. As Gayatri Gajare mentions in her review of the album, “It’s safe to say that The Revisit Project has had a considerable impact on the proliferation of the jazz/funk genre in the independent music scene. With these factors as their sword and shield, there’s much excitement to predict the kind of sonic landscapes they might conquer next.”

In the case of Srinagar-bred rapper and producer Ahmer Javed, the personal is always intertwined with the political. Visualized like an apparition amidst flames on the cover of his second album AZLI, Ahmer floats skywards even as his feet are bound. It’s immediately conveyed that he’s no longer the young man from Little Kid, Big Dreams.

Ahmer digs deep into his psyche and takes a few steps back from all things past and present. Whether it’s his icy words about feeling never fitting in (‘Gumrah’) or the claustrophobic sense of being hopelessness (‘Nishaan’), the rapper strikes at the listener’s conscience like never before. Even the cinematic songs like ‘ROV’, ‘Janaza’ and ‘Shuhul Naar’ have a warped sense of production to shake anyone out of getting just a surface-level experience of AZLI. Sampling Kashmiri traditional music on ‘Kun’, Ahmer brings back MC Kash for a cut-throat surprise verse, showing us just how committed he is to blasting transmissions from the valley.

Pianist and composer, Anirudh Varma, returned to the independent music space with a 10-track album titled Homecoming. As emphasised in Shreya Bose’s review of the project, “Homecoming does feel like a return. Anirudh immerses himself into the tradition of his birthplace, and only punctuates it with Western influences. He imagines the possibilities in classical sounds that may emerge if they were heard from modern musical sensibilities.”

Combining the most primal elements of classical Indian music with arrangements of the present, and doing it successfully, is a tall order. But it’s one that Anirudh and his collaborators accomplish with skill and deliberation. The result is a musical journey that takes you to all those warm corners of the heart waiting to be explored, pulling you back, only to immerse you into another equally joyous experience. Homecoming is a victory in many ways—it tries something new and does it well. And, most importantly, whatever it is you’re feeling, it’ll give you a home to feel safely.

2. Seedhe Maut and Sez on the Beat – NAYAAB

The mirror image to Bayaan in more ways than one, the sophomore release was a return to familiar territory. The trio, reunited after parallel but equally upward trajectories, delivers a fascinating and exhaustive epic spanning 17 tracks. The lyrics tackle self-doubt, politics and chance encounters, even coming to the aid of a fallen comrade. Sez’s beats and arrangements are more melodic than before, lending tunes a sense of pathos. The overall production is fantastic and a pointed step-up in Indian hip-hop, some songs venturing into straight-up filth, both sonically and lyrically. We’re still at the year’s halfway mark, but it would take several herculean efforts to knock this record off the top spot.

From New Delhi to Fuji Rock Festival in Japan and now their long-hyped debut in North America at some of the biggest music festivals, Bloodywood are well on their way to becoming the most recognizable modern metal band from India. All the attention comes on the back of releasing their debut album Rakshak, which showcased a successful transformation for guitarist, flautist, and producer Karan Katiyar, vocalist Jayant Bhadula and rapper Raoul Kerr from YouTubers to full-time band.

Rakshak takes all the surging djent-fusion power of their previously millions-watched videos and pours a lot of production wizardry over it, making it a gigantic aural assault. In addition to familiar cuts like ‘Machi Bhasad’, ‘Jee Veerey’, ‘Endurant’ and ‘Yaad’, Bloodywood offer up more rap-metal aggression on songs like ‘Gaddaar’ (which takes aim at those who divide of religious lines), ‘Aaj’ (an emotive song for the downfallen) and rage without inhibitions on ‘Dana Dan’ and ‘BSDK.exe’