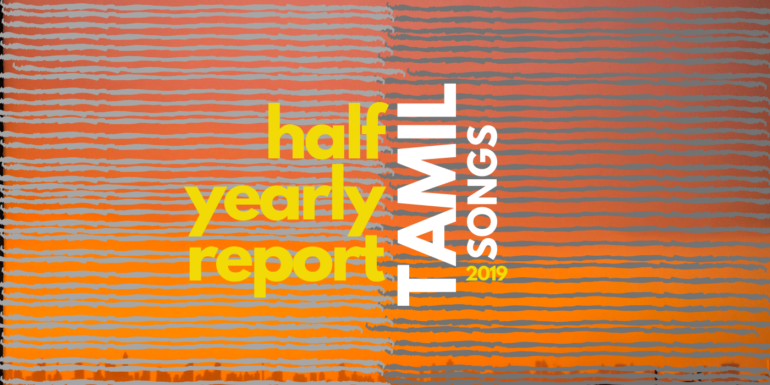 It has been a fairly impressive run for composers across the board in Tamil films this year. If we have to call out one composer who has been particularly exceptional this year, it is Justin Prabhakaran (Monster, Dharma Prabhu and Dear Comrade).

The year began with a beautifully packaged soundtrack by AR Rahman and Rajiv Menon for Sarvam Thaalamayam. Yuvan Shankar Raja had multiple good soundtracks including NGK, Kanne Kalaimaane and Sindhubaadh (not to forget his score for Super Deluxe). Sean Roldan delivered a fantastic Mehendi Circus and relatively less impressive Raatchasi. Ghibran gave a short (which seems to his norm) but a solid soundtrack for House Owner. Santhosh Narayanan followed up his terrific 2018 run with lovely tunes for Gypsy. It was happy to see Joshua Sridhar back in full verve with July Kaatril. Govind Vasantha so far hasn’t had a big year though he delivered a couple of outstanding songs for Uriyadi 2. Among the notable composing debuts this year are Siddhu Kumar‘s Sivappu Manjal Pachai and Ramgopal Krishnaraju’s Vellai Pookkal.

If you see past the opening lyric, the song sets up a haunting, gloomy mood that belies a beautiful tune. Yuvan Shankar Raja also gets to sing this song — perhaps a rare occurrence where the choice is justified. The flute arrangement in the song is well done. The soundscape, in general, is reminiscent of (his brother) Karthik Raja’s work.

Harris Jayaraj tries every trick in his toolkit quite successfully in ‘Oru Nooru Murai’ early this year from Dev.  Like the gibberish chorus peppered throughout the song, the tropes usually misfire (like it has for last several years now), but here he gets the concoction just right. The composition is very catchy, rendered well by Sathyaprakash and Shakthisree.

Santhosh Narayanan’s Gypsy has songs of many themes (politics, love, war and peace, etc.) and genres – the film’s protagonist is a present-day nomad. The instant ‘Vaa Venpura’ begins, we already know that the song is a call to action, an anthem of sorts. It is effective as the composer’s work in Iraivi  (‘Manidhi Veliye Vaa…’). The icing on the cake is roping in TM Krishna (happens to be his debut!) for vocals.

Airaa is the young and upcoming composer Sundaramurthy’s best work so far. ‘Megathoodham’ is easily the best of the short soundtrack (that also has a lovely title song sung by Sid Sriram). Thamarai’s choice of words is beautiful as is the way the song is picturized. Above all, the song is singer Padmapriya Raghavan’s show all the way.

Ghibran’s work in House Owner stands out in many ways – for one, it is good to see him in a slice-of-life flick, a departure from the shoe-horning he has been subjected to over the last few years. The soundtrack has three songs, each winning in its own way. ‘Saayamal Saaiginra’ is especially an endearing track, set to a breezy western orchestration. Benny Dayal, with many vocal shades in this song, easily wins you over.

Sean Roldan joined hands with director Raju Murugan again (after Joker) for Mehandi Circus. ‘Aavoji’ is a curveball in the whopper of a soundtrack; a jazz-themed, highly energetic song. Pay attention to the way the song progresses, Santhosh Narayanan’s singing and the arrangement, it is sure to remind you of Amit Trivedi.

‘Anthimaalai Neram’ is only the first of the many Justin Prabhakaran songs in our list. This is the kind of a song that one catches on radio, gets instantly hooked and goes the extra mile to figure out the credits and the film. Sid Sriram is on cloud nine this year, and this song is a prime reason.

Dharma Prabhu is one of those obscure movies that features a good soundtrack which inevitably gets buried. Until it is unearthed years later because the composer becomes a phenomenon. Justin Prabhakaran is on his way to being that. Featuring this stunner of a duet on the list is job half done on our part.

Yuvan Shankar Raja’s current run (he definitely seems to have reinvented himself) really helped his reunion with director Selvaragavan. It gives a glimpse into his work of heydays. ‘Anbae Peranbae’ is a fantastic duet with powering lead vocals of Sid Sriram and Shreya Ghoshal. The comfort of nostalgia in music cannot be overstated, this song is another evidence.

The consistency of Joshua Sridhar is one of the few granted things in the millennial’s Tamil film music memories.  It also brings a bit of pang for the generation because he is highly underutilised. But then, a July Kaatril arrives out of the blue, puts a smile on their faces and everything seems normal. ‘Merkilae’ is everything one loves about the composer, and more.

The song ‘Varalaama’ from Sarvam Thaalamayam grabbed all ears for many reasons. The first of which is that it is composed by the director Rajiv Menon, in a soundtrack otherwise helmed his usual associate AR Rahman. It is easily the most befitting song of the soundtrack. Sriram Parthasarathy is glorious on the vocal front.

Santosh Narayanan, despite his impeccable versatility, has steered clear of complex ‘melodisations’ keeping his hooks simple and his orchestrations stellar. Raag Peelu intact, his synth and bass dominance are still as evident in ‘Manamengum…’. His vocalists, Dhee, Ananthu and Haricharan, lend him terrific support in delivering a quintessentially Tamil melody (read: Raja melody), to heartwarming results. The fact that the song didn’t receive the adulation it deserved is a tragedy one can’t do anything about. Late bloomer, one may hope.

In a soundtrack filled with absolute gems, ‘Dingu Dongu’ stands out for its sheer audacity to experiment with rustic Tamil folk elements, erstwhile associated with Santosh Narayanan’s phenomenal ‘Gaana’ numbers. Based on the evergreen Carnatic Ragam Dharmavati, the song flanked by exemplary percussive brilliance, works like a dream, courtesy an in-form AR Rahman at the helm. Though the ace composer didn’t receive the credit he deserved for the soundtrack, the song reiterates his command over the jargons of music and the wagons that drive his audiences’ drift.

‘Pularaadha’ is ample testimony to Justin Prabhakaran’s shining run this year. The gloriously structured melody, set against the ever so dependable Ragam Kalyani is evocative and well rendered. Prabhakaran’s penchant for letting his minimalist orchestration speak for itself is in display full monty and not one person is complaining.

Govind Vasantha has had a phenomenal critical and commercial run with his career-defining soundtrack for 96. He followed it up with Seethakaathi, and Uriyadi 2 is no different. ‘Vaa Vaa Penne’, featuring current sensation Sid Sriram and Priyanka, boasts of as much orchestral brilliance as it does of vocal sensitivity. The song’s structure crystallizes when ‘Vaa Vaa Anbe’ kicks in and is a beauty to behold. The choice was by no means easy, but ‘Vaa Vaa Penne’ is the song of the year so far.