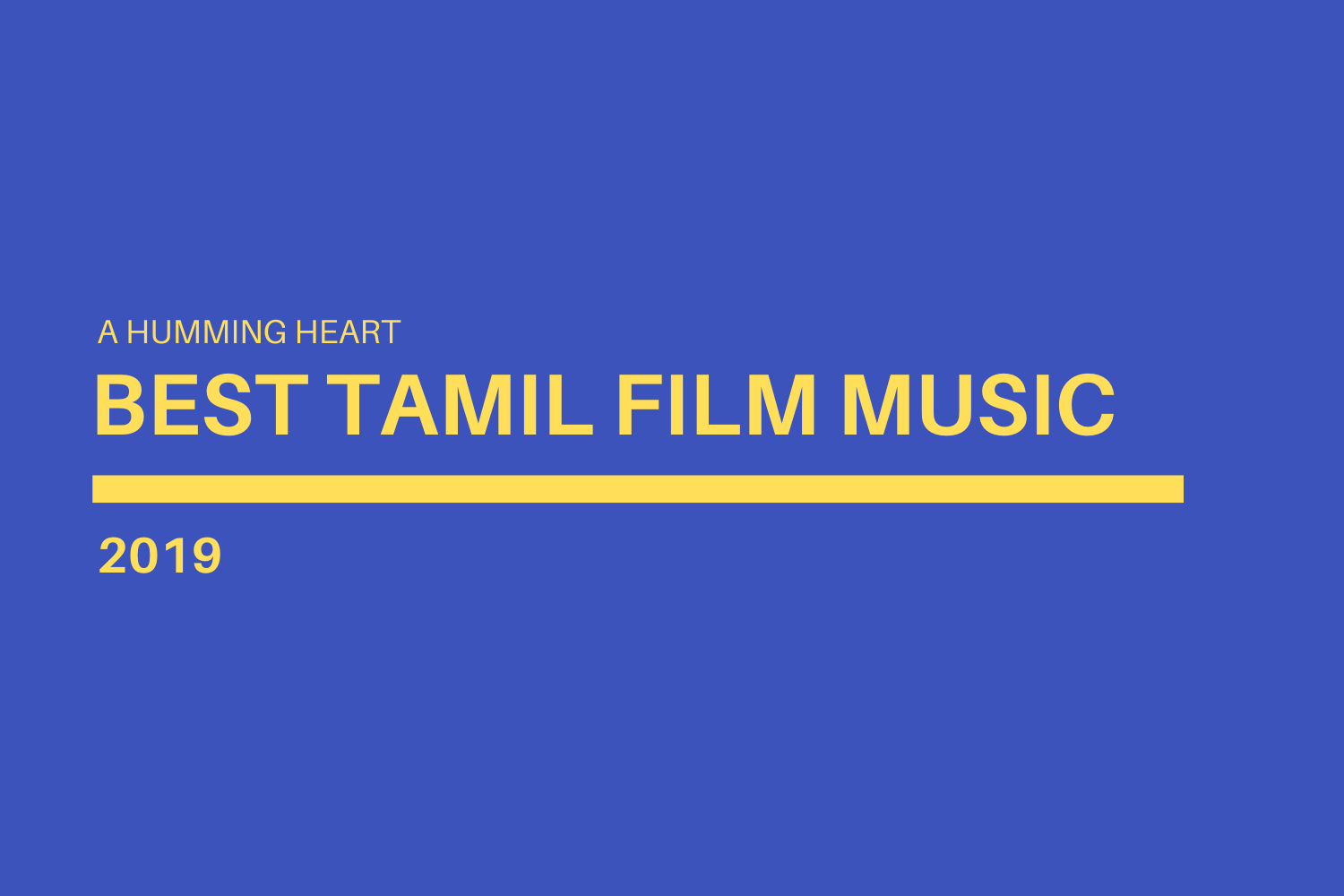 Tamil film music 2019 comprised highs and lows. Though not quite as good as 2018, the volume of good music stayed competitive with respect to regional music in the South.

The composer of the year 2019 in Tamil is Justin Prabhakaran, who had the best career year with five albums; Dear Comrade (easily the soundtrack of the year, but it is essentially a Telugu film and soundtrack, so we are discounting the dubbed versions from our lists), Monster, Dharma Prabhu, Adutha Saattai, and Naadodigal 2. Govind Vasantha and Sam CS who had a successful and prolific 2018 remained low-key this year; Anirudh Ravichander’s Tamil outing this year wasn’t particularly exciting. Ghibran, on the other hand, had a steady stream of good music. Among the new composers, Siddhu Kumar (Sivappu Manjal Pachai) and Ramgopal Krishnaraju (Vellai Pookkal) stood out. Interestingly, some of the best-reviewed movies of the year, Super Deluxe, Kaithi, To Let, Oththa Seruppu and Game Over hardly featured songs.

It is good to see composer Sundaramurthy being consistently good over the years, despite never landing big films. The short soundtrack for the horror-thriller Airaa is particularly impressive given the scope he has to work with here.

‘Megathoodham’ especially is a lovely composition that finds a right match in the vocals of Padmapriya Raghavan. It is meant to be a wedding song, but there’s a thin melancholy layer that runs throughout which is even more apparent in the film’s context.

The soundtrack of Bakrid has quietly turned out to be the best work of Imman in some time now. The album is atypical of his style, steering clear of his template that is becoming jaded now (though nothing to take away from his Namma Veettu Pillai that follows the template yet works well).

‘Aalankuruvigalaa’ is a lovely melody that rides on Sid Sriram’s successful singing streak. ‘Lorry Lucky Lorry’ is the best track of the album, a road song set that hardly takes the foot off the gas paddle from get-go. The sober version of ‘Karadu Moradu Poove’ works better, though the ‘joyous’ version isn’t exactly rapturous.

Siddhu Kumar made a confident and promising debut in 2019 with Sasi’s Sivappu Manjal Pachai.

‘Mailaanjiye’ (a word that has suddenly become popular with the lyricists) is an endearing composition with the catchy repetitive titular hook. Shashaa Tirupathi sings a second duet ‘Idhu Dhaan’, with Naresh Iyer; the song is very similar to ‘Mailaanjiye’ in the way it segues into a folk-based charanam. ‘Usure’ is another dreamy melody rendered by Sudharshan Ashok with a fleeting yet lovely support by Jothi Pushpa. A spirited Anitha renders the gushing and meandering ‘Raakaachi Rangamma’.

Irandaam Ulagaporin Kadaisi Gundu drew comparisons with Pariyerum Perumal (2018) for some of its focal points. The soundtrack, being highly thematic and having a surreal quality, also draws parallels.

‘Irulvanam’ and ‘Neduvazhi’ are not quite meant for the road – they are ethereal and sometimes haunting. Even in the love duet ‘Maavuliyo Maavuli’, the freakish nature shows in the way the titular phrase is rendered, making it a fusion of some sort. A similar theme is apparent in the rather melancholic ‘Thalaimurai’ that Chinnaponnu and Shakthisree Gopalan render with great conviction.

Aadai is a thriller that doesn’t leave much room for songs, but the Oorka Band manages to use minimal and effective songs in the background score.

‘Nee Vaanavilla’ is a cover of the band’s own song from their eponymous album, this time rendered by the brilliant Shakthisree Gopalan. ‘Onnum Illa’ is heavy rock rendered by the band vocalist Bharat Shankar. Pradeep Kumar remixes the devotional number ‘Raksha Raksha Jaganmaatha’, deftly throwing the original P Susheela’s vocals in the mix; the resulting rock fusion is quite delightful. Pradeep’s other song ‘Oru Naal’ is perhaps the best song of the album. The tongue-in-the-cheek ‘Thoppi’ sung by Vijaynarain is sheer fun.

Kaalidas is composer Vishal Chandrashekhar’s best work in Tamil since ‘Jil Jung Juk’ (2015) that catapulted him to fame. The five-song album has some lovely reinterpretations of traditional songs and tunes as well as original compositions.

‘Mazhai’ is based of the traditional wedding song ‘Ponnoonjal Aadi’ that is only apparent in the interlude; Vishal weaves a beautiful tune around it. It makes us wonder why Sudha Raghunathan doesn’t get to sing in films as often as Bombay Jayashri does. Abhay Jodhpurkar is good in both the versions of the Bharathiyar song ‘Kaakai Chiraginile’. The cop-thriller theme gets two typical songs that are usually featured in this context (like in Talaash or Kavaludaari); ‘Santiago Saaral’ and ‘Meraki Nenjam’ have some great orchestration and singing working largely in their favour.

The best song is the duet ‘Neeyagave’ sung by Chinmayi and Sathyaprakash, that doesn’t so much as hide a lovely nod to Ilaiyaraaja’s 90s hit ‘Mazhai Varuthu’. Ghibran has a great knack of using a simple percussive rhythm to give shape and form to a melody. ‘Nayaname Nayaname’ falls squarely in this zone. ‘Saayamal Saagindra’ sung effortlessly by Benny Dayal has a lovely jazzy feel going for it.

There wasn’t much to look forward to AR Rahman getting back with Atlee (Mersal, 2017) once more in Bigil. But, fortunately, the soundtrack turned out to be more than satisfactory. The album originally included five songs, but later two additional lovely background song pieces in the film were released.

‘Maathare’ is a meditative track, with incisive lyrics post #MeToo movement, sung by an ensemble of singers led, aptly, by Chinmayi Sripaada. The simplicity and sweetness of ‘Unakaga’ are a contrast to the anthemic, loud and a bit jaded ‘Singappenney’; the intro song ‘Verithanam’, on the other hand, is a crazy dance number that the lead actor Vijay renders in his characteristic style.

It is good to see Yuvan Shankar Raja getting his spell back in the last couple of years. In 2019, he gave a good set of songs in Kanne Kalaimaane, but produced an even better soundtrack for Selvaraghavan’s NGK.

Though not close to the magic they used to create in the 2000s, we can see the director-composer chemistry intact in at least a couple of songs. The fairly short album opens with a powerful ‘Thandalkaaran’. ‘Thimiranumda’ is vibrant, that employs pipe instruments to exhilarating effect. Sid Sriram and Shreya Ghoshal are at the top of the game in ‘Anbae Peranbae’; it gives a glimpse of the composer’s thriving form early in his career.

Santhosh Narayanan followed up two remarkable soundtracks in 2018 Pariyerum Perumal and Vada Chennai with Gypsy in 2019. The movie is yet to release, but its nomadic theme comes across quite vividly in the songs that are often loaded in the verses.

The songs cover a number of themes including love, politics and casteism. ‘Manamengum Maaya Oonjal’ is greatly moving number sung exquisitely by the composer’s regular affiliates Ananthu and Dhee. ‘Theevira Vyaadhi’ effectively uses the rap format to get its message across. TM Krishna debuts as a mainstream singer with the anthemic composition ‘Venpura’; the song invokes Santhosh Narayanan’s earlier work in Iraivi (‘Manidhi’) especially in its chorus stretches. Perhaps the only song that doesn’t really work musically is the one that’s unfortunately titled ‘Very Very Bad’.

For the comedy flick Monster, Justin Prabhakaran gave a seven-song soundtrack that is surprisingly rich and nuanced in the choice of tunes. The album speaks to the composer’s terrific run in 2019.

‘Anthimaalai Neram’ with Sid Sriram’s characteristic rendition is an instant ear-worm; it is hands-down one of the sweetest and most memorable tunes of the recent times. The less heard ‘Theera Kadhal’ and the folk-based ‘Ennai Thedi’ are equally beautiful compositions with some top-notch lyrics. Even the songs that play over as montages during the comical sequences work wonderfully in the film.

AR Rahman’s better output this year was in Rajiv Menon’s drama Sarvam Thaala Mayam. This was a field game for the composer, given the importance/role of music in the film, a drama around an aspiring musician.

In a soundtrack helmed by AR Rahman, it is remarkable that the stand-out song is a composition by a debutant. ‘Varalaama’ is a beautiful classical number composed by the film director himself donning the new hat. The titular track is as aurally satisfying as it is visually. Chinmayi Sripaada’s ‘Maaya Maaya’ is another delightful composition that pays no heed to film song conventions. ‘Dingu Dongu’ pays throwback to Sangamam times, while ‘Peter Beata Yethu’ is manifestation of composer’s growing indulgence in the ‘kuthu’ format.

For a career spanning nearly two decades, and extremely fond soundtracks to his credit, Joshua Sridhar is one of the most underutilized music talents in the South. In ‘July Kaatril’, he gave us nearly everything that we have grown to love about his songs.

All the five songs in the soundtrack are fresh and vibrant; ‘Merkilae Merkilae’ and ‘Kaatre Kaatre’ are particularly wonderful. The former is as good as Joshua gets, and the latter is a beautiful semi-classical composition. ‘Kangalin Oramai’ successfully brings two unusual voices together – Suzanne D’Mello and Ramya NSK.

Joshua’s curse of being roped into movies that sink without a trace is yet to be lifted. This, unfortunately, also means that his soundtracks often go unnoticed as well.

After a muted 2018, Sean Roldan delivered yet another beautiful soundtrack in Raju Murugan’s Mehandi Circus. In line with his earlier outstanding offerings Joker (2016) and Pa Paandi (2017), Sean Roldan’s consistency is remarkable. He is one of the best composers who found feet, critical acclaim and glory within the past decade.

The album has predominantly folk sound, amply aided by the choice of lead vocals. Sean Roldan’s increasing adherence and inclination to producing Ilaiyaraaja style melodies and rhythms works yet again in this film’s context. The album also tries to steer away from the folk genre, to a great result, in two occasions; Aavoji is a riot with its usage of percussion and strings; ‘Love Polladhadhu’ is a dreamy composition that singer Vijay Yesudas owns.

The Tamil film soundtrack of the year is Darbuka Siva’s sophomore effort for Gautham Vasudev Menon’s Enai Nokki Paayum Thota. It is mighty impressive that the director manages to get some of the best tunes from every composer he works with, consistently, year after year. ENPT no doubt is Darbuka Siva’s best work yet — the unsettling pause that strangely segues the two halves of ‘Hey Nijame’; the fantastic eighties filmy pop sound throwback in ‘Thirudaathe’; gorgeous versions of ‘Maruvaarthai’.

It may be a bit of a stretch to claim this soundtrack as one of 2019 – Sid Sriram’s ‘Maruvaarthai’ floored us exactly three years ago to date. ‘Naan Pizhaippeno’ came a year later, and then ‘Visiri’, and only towards the end of 2019 did the movie and the full soundtrack saw the light of the day.

It was well worth the wait.