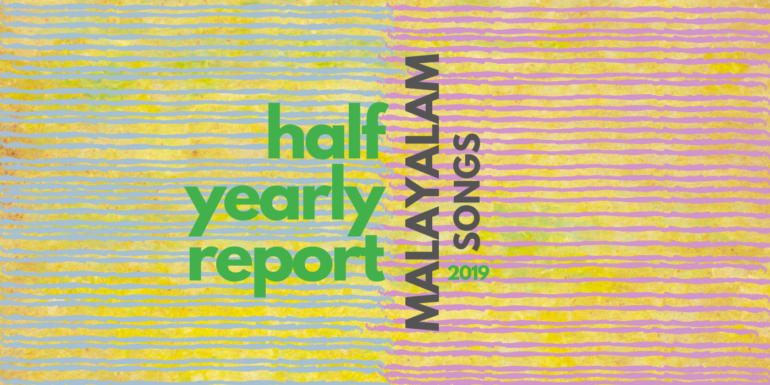 Malayalam film music continues to hold its flag high, leading the film music output in the country by example. It has set a high bar in quality this year so far; as it did the last year, and the year before, and so on. We bring to you our half-yearly selection for the second consecutive time. Our list features songs from the usual suspects Rahul Raj, Gopi Sundar and Sushin Shyam, as well as some new promising entrants this year Ifthi, PS Jayhari and Leela Girish Kuttan.

Sushin Shyam continues to dominate this year (sorry, spoiler!). Prince George made a good composing debut in Vijay Superum Pournamiyum and Achu Rajamani made his Malayalam debut with a fairly good Kuttymama. That they missed our list this time only speaks to the quality of songs in general.

Counting down to the best:

Oru Nakshatramulla Aakasham is a well-made three-song soundtrack, with Rahul Raj’s ‘Mizhiyil Paathi’ standing out. The song is set to a lullaby feel – aptly so, the context here is teacher showing love and care for a disabled student. Sithara Krishnakumar handles the vocals with the earnestness of the song’s theme.

Gopi Sunder’s work in Uyare is sensitive and delicate, as ‘Nee Mukhilo’ stands to attest. The song begins with a string section that is unmistakably a nod to Ilaiyaraaja’s famous ‘Valaiyosai’ (ft. SPB & Lata Mangeshkar); what follows is haunting at times, and brooding even, but the melody just works beautifully throughout.

The better song from Rahul Raj this year so far is a lovely semi-classical composition from Kodathi Samaksham Balan Vakkeel.  Harisankar is quickly becoming the go-to singer for this genre — ‘Then Panimathiye’ is right up his sleeves. The uncredited female aalaap in the interlude is charming, as are the Indian-classical instruments in the orchestration.

The second song by Gopi Sunder on our list has a very 80s touch to it. Sung ably by Vijay Yesudas, it is reminiscent of his similar stint in the cult hit ‘Hemanthamen’ from Kohinoor (2015). A slow-burning ballad with minimalistic orchestral drifts, the song is very unlike the usual Gopi Sunder compositions.

It is Vinu Thomas this year who gives us an enchanting Reetigowla in ‘Kumkumanira Sooryan’. BK Harinarayan’s words are vivid. Another classical song in our list, Shreya Ghoshal finds no issues in taking the composition to its glory.

Leela Girish Kuttan is off to a great start in his career this year with at least two lovely soundtracks. ‘Meene Chembulli’ from Thottappan is a gorgeous composition with a mesmerizing swing to it. Nikhil Mathew is extremely effective in conveying the emotions – it is a pity he doesn’t get to sing more often.

Shahabaz Aman became a household name with his highly acclaimed stint in Rex Vijayan’s Maayanadhi soundtrack. They are back with Thamaasha, a remake of the Kannada film Ondu Motteya Kadhe. Not only did they succeed in emulating the original’s musical excellence, but also in bettering it at times. Shahabaz is his mellifluous best in ‘Paadi Njan’, where he also flexes his orchestral musculature.

Leela Girish Kuttan is back in our list, this time for a contrasting composition in the soundtrack of Oronnonnara Pranayakadha. The song is a stunner, utterly engaging and an instant ear-worm. Above all else, it is a sure reminder of Vidyasagar’s umpteen hit songs and soundscape in his heydays.

Ifthi makes a brilliant debut in June, that brims with promise. The eight-song soundtrack offers many lovely songs and is easily one of the top albums in recent times. ‘Aadyam Thammil’ features sublime vocals of Anne Amie and Sooraj Santhosh. Ifthi shows great craft with arrangement here. The song comes together supremely well, raising above a familiar template.

6. Arunvijay – Puthiya Vazhi (from the film Mr and Ms Rowdy)

Musician Arunvijay made his composing debut in PC Sreeram’s Praana early this year, with an enigmatic ‘Shalabhamayi’. Soon he landed a second film, helmed by Jeethu Josheph, Mr and Ms Rowdy. Here, he comes up a more beautiful ‘Puthiya Vazhi’, very much a follow up his slow-paced, haunting debut song. The melody is almost hypnotic, holds your attention like a metronome.

‘Masala Chaya’ is brief, gorgeous and incredibly infectious. Composed and sung by the inimitable Neha Nair, the song is a sonic personification of the rustic, Indian petrichor. Working as well as ‘Do Naina’ (Angamaly Diaries), the song invokes all the warm fuzzies and frisson of that one irrepressible infatuation with effortless ease.

Another composing debut in our list is Athiran by PS Jayhari, who gave a short soundtrack for the movie (with Ghibran doing the background score). The rest of the album isn’t very interesting, but ‘Pavizha Mazha’ makes up for it. The progression of the song is fantastic — slow chimes, a rush of Violins, all soon climaxing in a delightfully long titular stretch (the video frames that accompany these lines are an absolute delight too).

‘Cherathukal’ has Sithara Krishnakumar gleefully take a backseat letting Sushin Shyam’s orchestral efforts shine while also pitching in by being at her evocative, melancholic best. However, what really makes the song worth the unanimous acclaim is the way Sushin flawlessly builds and leads it to an unexpected male vocal outro that acts as the perfect crescendo. The end result is both chasmic and cathartic.

Luca is perhaps the biggest outing for composer Sooraj Kurup in a long time. If the first song that was out, ‘Ore Kannaal’ is any hint, this might get him some limelight. The song rendered by a riveting singer ensemble has a fantastic rock fusion feel to it. Bursting with infectious energy all through, this is the kind of track that promises a goosebump ride in theatrical viewing.

‘Uyiril Thodum’ is the quintessential love ballad with the ever so dependable Sooraj Santosh and Anne Amie, both in fine fettle, at the helm of things. The contagious melody, simple in production and ample in groove accumulation, is one of the most inventive romantic numbers in recent Malayalee memory. Sushin Shyam easily leads now, and very likely will by the end of the year too.