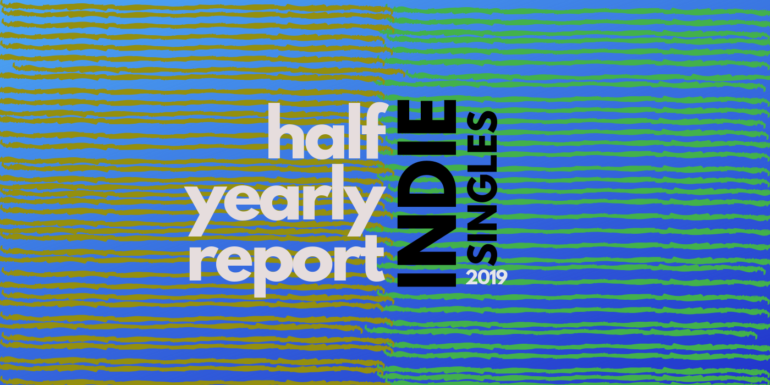 The first half of 2019 has been overwhelming when it comes to content generated on the internet, all thanks to the largest democratic exercise which took place in the country. But when it comes to music, one can’t feel saturated no matter how much music the Indian independent music industry continues to churn out. The sheer quality and quantity of the music released till now is overwhelming in the most positive sense of the word.
Our team of writers conducted a little democratic exercise of our own to list the best music that came out between December 20, 2018, to June 15, 2019.

Seductive, groovy, slick and bluesy to the core, ‘Space’ is designed and engineered to be a banger from end to end. Pranati’s energetic vocals take center stage as the bluesy riffs and thrifty percussion run circles around her. The band has a refreshing grasp of the fundamentals of rock and roll and what makes it great. The band members boast a remarkable chemistry, which makes for an extremely fun and entertaining listen.

The brief, yet dense ‘Prithibi Chai’ leaves the listener with a lot to unpack. The pummelling and relentless sub bass the haunting synth lines strewn all over its pulsating soundscape. The trap beats dig deep from one hi-hat to the next. The autotune soaked vocals blend well with the haunting instrumentation to deliver a chilling experience.

‘Mother’ is a joyous song, and Abhilasha delivers the ballad-style track with equal ease, and equal angst. The gradual build-up of instruments, and eventually vocals take the song based on a simple melody, to a dramatic, almost cinematic end. ‘Mother’ showcases Abhilasha’s knack for effortless pop craftsmanship and has us looking forward to what she produces next.

The prodigal son of Indian hip-hop returned with a bounty of 3 tracks after a protracted break. At the helm was ‘Aafat Wapas’, a sequel to his breakout hit ‘Aafat’. Naved Shaikh with, let’s face it, nothing left to prove, unwraps bar after bar of razor-sharp lyricism; a clarion call inviting any competition to revel in his return to his rightful spot at the tippy-top. Straddling some grimy production from Phenom, the rapper delivers a top-tier tune with one of the catchiest choruses this side of hip-hop.

Ramya Pothuri’s prowess as a vocalist had already been established with her debut release, but her new single ‘Summer’ is a major step up from her older material. The track sounds deceptively simple, although it comes with great electronic manoeuvring and definitely better songwriting. With beautiful lyrics and Pothuri’s delicate delivery, the track smoothly glides onto our half-yearly report and into our “mood” playlists.

A track with an ethos taken straight from the 2000s Indie Rock heyday, ‘Playground’ reeks of nostalgia and wide-eyed optimism. The cute choir vocals and the hesitant guitars that slowly build up coalesce to create an emotionally resonant experience. Shashwat’s grounded baritones and passionate falsetto string together a set of verses with an unmistakable folklore quality to them.

Smalltalk, still a relatively young band, has wiggled its way into the top charts with its slick grooves and minimalistic sound. ‘Tired’ comes after the band’s 4-track EP debut last year and hits the absolute right spot. Each member gets a moment to shine, but Yohann Coutinho’s bass takes the cake.

pens down a gritty political commentary and doesn’t hold back any punches. The question it asks the political dispensation is simple and direct, why do you stifle free speech? Producer Sumit Roy keeps the production minimal and rightly places his trust on his songwriting abilities to deliver the punch to the gut.

6. Anisha Uppal – Stand There With You

‘Stand There With You’, Anisha Uppal’s second single to release this year, dabbles in jazz-pop, with a tinge of Persian melodicism. Particularly impressive is the guitar solo that’s a string equivalent of the Texan drawl, the kind of slow-burner you yearn for on a gloomy Sunday morning, or any groggy morning for that matter.

Mumbai-based agency Mixtape and French label Nowadays Records released an exciting new compilation this year, ‘Around The World – India‘. An 11-track effort curated by the two, the release features some of the freshest sounds on offer from 13 homegrown acts including Kumail’s latest. Cool, crisp and tacitly ominous, the track exhibits a melancholic incisiveness that has been characteristic of the Mumbai producer’s previous atmospheric creations.

The hilarious and tongue in cheek single from one of the most oddball producers working today and comedian Shayan Roy was completely out of left field. Paired with an unusual and quirky music video, MALFNKTION and Shayan trade slick and catchy bars over heavy trap beats. The lyrics are delightfully awkward and are filled with dense cultural references and weird puns. Their infectious yelps on the hooks over bellowing sirens make for an instant earworm.

The debut single by Mumbai unit Sixk revels in its old school production. There’s a lot of hip-hop in the mix at the moment, and the hype has grown ever since Gully Boy came out, but ‘Roll Numbers’ ensures it doesn’t sound like anything out there at the moment. With a blend of funk and hip-hop, Sixk has us waiting eagerly for what they produce next.

An unmistakably unique sound makes Sarathy Korwar’s upcoming album More Arriving one of the most anticipated albums of 2019. ‘Mumbay’, the lead single that features MC Mawali was the unmissable glimpse into what promises to be an exciting sophomore release. Korwar blends electronica, jazz and Carnatic on this song, and the result as good as it sounds.

The first single release off New Delhi’s proud rapper Prabh Deep’s upcoming EP K.I.N.G has proven that his brand of exciting and technically masterful hip-hop is a force to be reckoned with. On this hefty new track, he shares his struggle of making it as a musician in the cruel industry over multiple pitch switches and beats. ‘Maya’ comes from the rapper as he experiments with a different, more fluid sound that persists on the whole EP, as we await the release of his follow up album to the massive 2017 debut hit Class-Sikh.