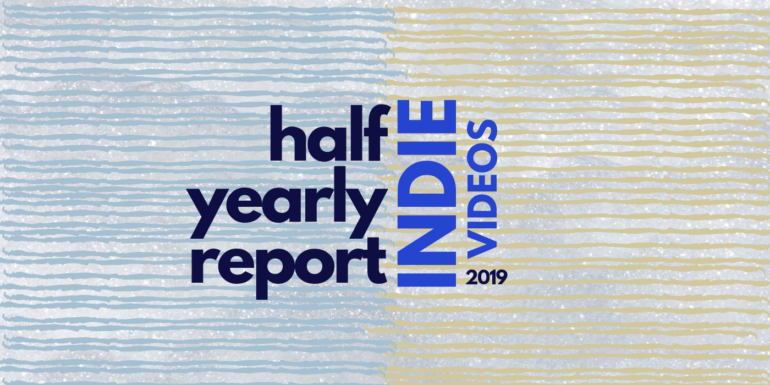 Music videos are shaping up to become a powerful art form for the Indian independent music industry. The strides in the last couple of years just as a natural part of the evolution of ‘the scene’ have been greatly aided by crowdsourcing platforms and commercial collaborations. We’re delighted to list the top 10 music videos of 2019 so far.

10. Hanita Bhambri – Nothing for our own

The acoustic songstress who made massive waves in the Indian music scene this year with the release of her debut EP, Nothing for Our Own,  released a music video accompanying the title track. The highly effective and widely lauded low budget production manages to flesh out the nuances of an estranged lesbian couple with flying colours. Hanita Bhambri continues to showcase her talent of maximising the impact of every vocal and string.

9. Anisha Uppal – Stand There With You

Anisha Uppal continues to push boundaries with her meta music video for the track ‘Stand There With You’. The track features empowering lyrics about and independence which are only bolstered by Anisha’s sweet voice and charming piano arpeggios. The video features clever use of lighting as we follow Anisha around a studio, incorporating various elements of the filmmaking process into the video like a shot of the camera in the mirror and the sound and lighting technicians.

Tarana Marwah’s solo-project Komorebi has been an outgrowth of the producer essentially geeking out over Japanese culture. The project serves as her muse for the convolutions of life, an emotional outlet of sorts. On ‘Little One’, a track that Tarana holds close to the heart given that it is an ode to her younger brother, she assembles surreal melodies into bite-sized arrangements. Tarana took this track to Misha Ghose and team who have translated her ideas beautifully into the film it is today. The aesthetic is dissolved and blurry, suggestive of a lost memory. The idea inoculates your head and tugs at the heartstrings – the dolls, toys, pencil markings, cobwebs, paper boats reminiscent of we’re all nostalgic for.

The experimental electronic duo Aerate Sound’s latest audio visual experience borders on surreal with a touch of sci-fi. The pulsating and throbbing beats and synth lines narrate the journey of a mysterious being in a space suit who is trying to find his way home. The video incorporates themes of the journey being the destination, finding yourself, being opportunistic and the cyclical nature of time. This surreal visual companion to one of the year’s most cerebral electronic tracks does not deserve to slip under your radar.

The song, written and performed by rapper Tony Sebastian aka Stony PSyko, tells the story of two rappers busted by Mumbai cops for smoking marijuana. Though the narrative had earlier been performed to much acclaim by Chamillionaire in ‘Hip Hop Police’, Tony and fellow rapper Rajesh Radhakrishnan aka Dopedaddy, keep it indigenous by rapping in Marathi and also visiting their Tamil roots. A run-in with the cops might not be an entirely relatable business for a few, but the humour and basic resistance to the system very much is. Also impressive is the terrific cameo by Vijay Maurya as a no-nonsense cop. Incidentally, Maurya also wrote dialogues for the very successful Gully Boy helmed by Zoya Akhtar, which spoke about a rapper trying to make it big.

Out of Baroda sprung one of this year’s finest finds, Shashwat Bulusu. The singer-songwriter has a great knack for melding lyrical tenderness with off-kilter arrangements, offering a new vantage point for a recently crowded space. With ‘Playground’ we find him on the cusp of realising his own voice, an aesthetic neatly tied together with a smile-inducing video that startles in its simplicity. Decidedly lo-fi by design, the film by Friends’ Republic is a heartwarming montage of the lives of three roommates doing things that roommates do – communal chai-drinking, reading, reclining and sometimes playing Head’s Up. With videos springing up all around that are ambitious by design and vision, it’s the straightest arrows that fly farthest.

Suryakant Sawhney is a blissfully oblivious monkey with a noose around his neck on Peter Cat’s music video to ‘Where The Money Flows’ from the band’s latest release Bismillah. The peculiar video dropped just two days ahead of the general elections in Delhi and went hand in hand with the band’s vocal support of the Aam Admi Party. One can’t help but draw parallels between Suryakant’s curiosity towards the little television box rumbling with Modi’s demonetisation speech and the gorillas’ initial awe when the monolith shows up in Stanley Kubrick’s 2001: A Space Odyssey. A massive slab of obviousness, perhaps it is something simply cannot be ignored. While Kubrick was describing the birth of conscious intelligent life, our humble monkey escapes the noose and all sets all the money in sight on fire. Is the track about the lull of love or is it a scathing indictment of our political landscape? Multiple listens only befuddles us further.

The new Parekh & Singh album has been splashed with a lot of bright colours, and the music video for ‘Hello’ is no different. The camera follows the two men as they try to manage time, costumes, new music, logistics and everything else that comes with being a musician. Missable on the first watch, one might have to take a second look to notice their long faces veiled behind bright colours. In the end, the burden leaves them low and uninspired when it’s time for them to play their music on stage. In hindsight, the video was probably meant as a hint at the band’s impending statement, which came only a month later, where Parekh confessed his struggles with stage fright and anxiety and declared that he would be taking an indefinite break from performing live. The video, aesthetically directed by Misha Ghosh, now seems more solemn than it did at the time of its release and leaves a long-lasting mark.

In the build-up to the release of their new EP WKND FRNDS, the F16s released their first single ‘Amber’ and immediately caught everyone’s attention. Set to the dreamy track and Deepti Sharma’s genius animations, the video tells a sad tale and leaves you uneasy at the end but wanting more. The protagonist of this tale, drowning in a pool of insecurity, purchases a new identity (because this is a futuristic world we are living in where we can clone Jim Sarbhs -scroll down- and get new personalities at the click of a button) only to discover that her actual self is irretrievably lost. Sharma brilliantly captures the struggle of the young girl who falls into the trap of the unbelievably high standards set by society and social media. The narrative adds a lot of character to the track and gives it a whole new identity, which ties in really well with the whole vibe of the short but sweet, sweet EP.

A product of ambition meeting clinical execution, our top choice has to be the Dar Gai-directed video for the synth-pop/funk outfit Ape Echoes. A song mentored by Mohini Dey and starring a whole mess of Jim Sarbhs (thanks to pretty wild editing), the video offers a glimpse of the human experience enhanced and then overrun by technology. With advancements like cloning apparently available for same-day delivery on an online store, our protagonist makes versions of himself to declutter a lifestyle born of his own apathy. These small conveniences mutate into a thirst for politics, where a million clones mean a million votes. But even these grandiose ambitions are derailed by a collective apathy, rendering the army of Jim Sarbhs nothing but mere Instagram-scrolling couch potatoes. Come for the many Jim Sarbhs, stay for the overarching social commentary.