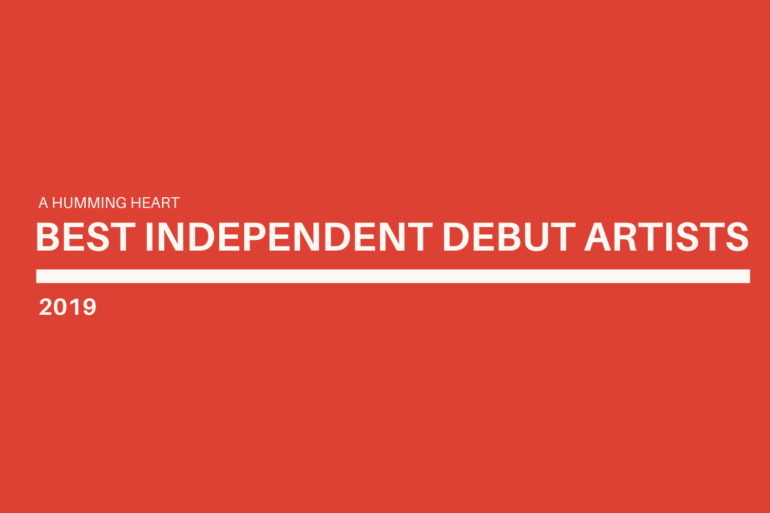 This list features independent musicians who made the scene take notice of their debut work in 2019.

Bombay-based hip-hop collective Sixk came to the fore in 2019, with three singles. Debut ‘Roll Numbers’ was definitely the strongest one of them; its sound a fun blend of old school hip-hop with a strong rock n roll vibe. The collective has showcased a willingness to establish it’s sound with its eagerness to experiment, and we eagerly await how its sound matures over the coming years.

The genre of world fusion, very unfunnily also referred to as world music, has honey-trapped listeners for years. Crowds formed as genres were mashed together, each genre’s proponent locked in this weird battle of skill and wits, but no one really winning. The flash is what brings customers, but to be honest, very few tend to stay as that in itself is another form of commitment. India sees its fair share of acts that take this hackneyed idea in its plasticine state and maketh the moolah. With their debut EP, Sabculture throw their hat into the ring with a mature set of 4 songs that don’t overstay their welcome despite their length.

Formerly known as The HansRaj Projekt, the world fusion outfit has opened for artists ranging from Javed Ali and Pritam to contemporary indie musicians like Raghu Dixit, something that has definitely bled into the EP. The resultant blend is a spacey, progressive marriage of adventurous instrumentation and tight, pointed production that brings out each performer’s best side.

The eponymous EP is a fun listen, possibly betraying the daunting tag of world fusion that the band has given itself. One thing that’s apparent at the end of this – the band’s ability to write catchy pop-worthy hooks. Earworms that stop short of being corny. That, and great outros. Beyond the tag, SabCulture choose songwriting over flash and skill, and we are ever so grateful.

Some might say that the four strings and a modest number of frets on a ukulele naturally imply limitation and inherent musical myopia. Some might also that the same four chords that make up most of what we know of pop music is sterile and not worthy of occupying our harddrive’s real estate. In the three songs that she released in 2019, Abhilasha Sinha seeks to challenge these apparent limitations of what singer-songwriters can hope to achieve with their “sad love ditties”.

Mastering the nuances of poetic expression in both Hindi and English, Abhilasha has proven to be a force to be reckoned with. Her lyricism is graceful and intimate, yet cutting and razor-sharp. Her approach to collaboration and production is calculated, innovative and catchy. Her songs are firmly rooted in soulful harmonies and catchy choruses that seem to soar higher with every listen.

Apart from her endless passion, talent and perseverance, what makes her a unique artist to follow is her appreciation of the business side of her art. Her background in Music Business from NYU has helped her deftly navigate the treacherous and cut-throat music industry through clever collaborations, networking and informed decisions. This is an often overlooked yet crucial key to success in the industry and any aspiring musician would do well to take a leaf out of her book. Abhilasha’s growth as an artist will surely be a fascinating one to track in the years to come.

Mumbai-based Palash Kothari aka Hedrun has made it his mission to challenge our perceptions of what is possible with abstract electronic music. Envisioning what could possibly be the next wave of the indie electronica scene, Hedrun seeks to blend the vernacular with the otherworldly. His artistic trajectory has undergone multiple changes in styles, aesthetics and names.

Under his latest moniker, Hedrun has opted for a more stripped-down and restrained approach to his compositions. The four tracks on Drift are deeply rooted in Rajasthani and Hindusthani classical music, which then bear lush synthetic fruit. Palash brings the Barmer Boys onto the closing track, ‘Pankhi’, adding a layer of improvisational jazz and swivelling textures throughout. Yes, the tracks are ambient, moody, hypnotic and at times confusing. However, Hedrun remains one of the most exciting voices in the indie electronica scene today due to his forward-thinking approach to production, bold ideas and proclivity to innovate and go places where others would hesitate to.

An occupational hazard that can arise from being a hired gun is the simultaneous erosion of individuality. You barter your skills, laying aside aspersions of the work you are contributing to, while enabling the risk of being homogenised and absorbed into the “work”.

On the plus side, it may also enable you to motor the same path in different ways. An extended repertoire to choose from in case of blocks. All things considered, relegating the impact of Dhruv Bhola on the Delhi indie scene to that of a mere hired gun would be selling him very, very short.

True, his contributions are varied: from bass duties with Peter Cat Recording Co. to guitars for both Prateek Kuhad and Run, It’s The Kid, Shed Winter has tiny aspects of all these artists peeping in through the cracks. The four tracks – including the lone feature ‘W.I.G.F.Y.’, with Ditty and Karan Singh conjure an image of log-cabin solitude and introspection.

Lyrically, the themes are laden with self-doubt and longing. “What was the last time? You were someone you recognized when you looked in the mirror and didn’t despise every inch of what’s inside you”. Bhola keeps things short, only one track on the EP going over four minutes, leaving things at a peek rather than a big reveal.

The arrangements are stripped down, acoustic guitar forms the core, and electronic percussion exists to offer a neat juxtaposition. The runtime might be the EP’s only flaw, a couple of songs ending somewhat prematurely, but the satisfaction from a solo listen of this EP is worth the twelve or so minutes of its runtime. Every time the boundaries of what is possible in the musical realm begin to burst at its seams, history has one-uped us time and time again.

On his debut EP titled E L F L, Azamaan Hoyvoy does not let a second go by without showing off his skills as a musician. He adopts a lovesick avatar for the theme of the EP. Keeping the lyrics simple leaves headroom for him to experiment with his vocals – the element that stands out the most even after multiple listens. Hoyvoy’s musical creativity runs wild on E L F L and he audibly has a lot of fun with it.

The Mumbai-based singer-songwriter could not have chosen a better time to show himself for what he is. The Indian market is ripe and hungry for a unique sound like his. Certain instances that come off as audacious actually build into a carefully crafted portfolio that can be and has been curated to score coveted spots at popular festivals. Before the release of his EP, Hoyvoy already had a footprint with ad jingles he made for big brands and multiple successful collaborations. Now, he is not afraid to put his foot down, stomp and sing to leave a permanent mark behind.

Percussionist Praveen Sparsh broke out from the background and took centre stage with his first release as a solo artist, Unreserved. Not an uncommon name in the Carnatic circuit, he continues to collaborate with biggies such as T.M. Krishna and Sid Sriram before. On his solo offering, he proudly blends the traditional and the modern – something that the creatives in India do either very well or lose themselves in the dissonance of. He brightly features among the former. He achieves this with electronic sounds and real-life nature and traffic sounds seeped in along with exciting collaborations with artists like Shreya Devnath and Jonah Levine.

Every song on the album is under four minutes (barring ‘Fly’) and reels in the listener within the first 20 seconds. Anyone with a keen ear will be able to tell that this is just a mridangam virtuoso, but also someone who knows how to flow with the times. For today’s listener with a tiny attention span and hundreds of thousands of carefully curated playlists at their disposal, this succinct EP makes a strong landing. You will be hooked with the first few seconds of the opening track ‘Unreserved’, featuring easily recognizable sounds from an Indian railway station, and won’t be able to let go until the very last second of this 18-minute EP. With his experienced handwork and willingness to experiment, Praveen Sparsh is quite easily one of the most promising Indian artists young musicians could take a tip or two from.

Ahmer Javed’s debut came in the form of a statement that is Little Kid, Big Dreams. The album, as the artist emphasised in several interviews later on, represented stories of conflict and resistance that young Kashmiri minds and aspirants have faced for generations.

Partnering with New Delhi hip-hop producer Sez on the Beat (who previously produced a smashing debut for New Delhi rapper Prabh Deep), Ahmer delivers an album that carries both a regional and personal lament surrounding the militarised Kashmir.

The album passes through distinctive phases, each unique to the rapper and Kashmir, eventually ensuring an effective outcome that covers his childhood, the teenage and growing rage that can only be expressed through songs. The depression in the air coupled with mainland India’s lack of empathy resulted in this eight-track stunning and important record.

JBABE can take the crown of the most flamboyant debut of 2019. Play the Piano Drunk Like a Percussion Instrument Until the Fingers Begin to Bleed a Bit is a bold and intimate release packaged in an extravagant 5-track lo-fi, R&B EP.

One can only imagine the effort it takes to make sure that the audience experiences the solo project of the frontman a leading band without any auditory hangover. However, on his debut record, Joshua dares to wear some of the band’s signature sounds, sprinkled cautiously in bits here and there.

The final product is a unique flavour of sound that will only be known for JBABE henceforth. Fernandes has fused R&B, soul and dream-pop to build this “bedroom pop” album which has an aesthetic – auditory and visual — of its own.

One of the strongest albums of the year came from a Bangalore-based band that sings in Nepali. In the crowdfunding campaign for their debut album, the band stated that it “stands for transcending the boundaries between language and geography”. The 10-track album, Joro, which translates to “fever” has infectious jam rock sounds, beautiful harmonies, and wonderful folksy arrangements. The songs sound fresh, with the band employing folk rhythms and putting forth a groovy Nepali language album. It is impossible to hear ‘Simrayo’ and ignore it. It stays with the listener after taking some time to kick in.

In a year where the volume of independent releases and the general quality of it was extremely high, Joro and Gauley Bhai made an indelible impression.