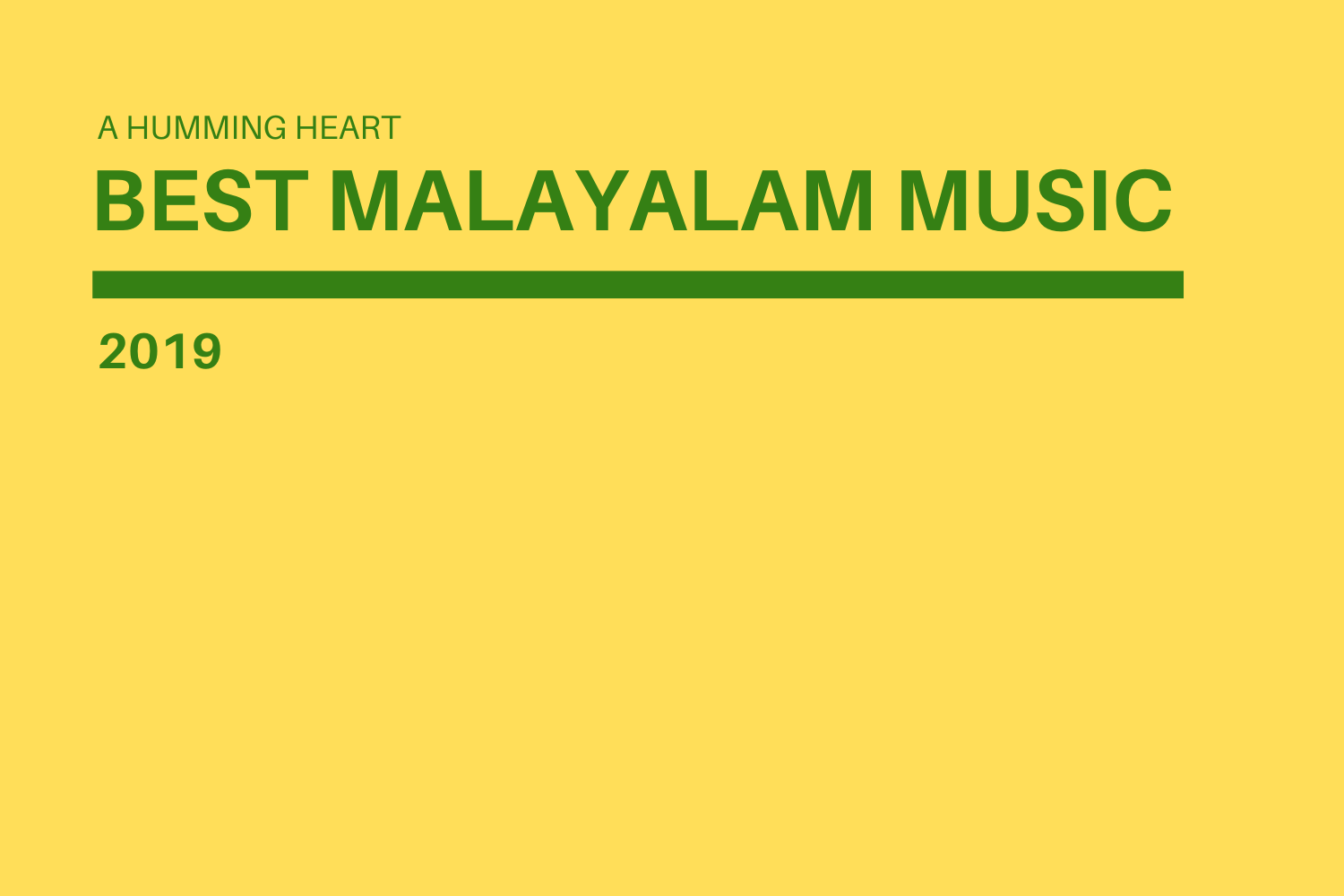 Overall, yet again, 2019 turned out to be great for Malayalam film music. Shaan Rahman and Gopi Sundar were prolific in 2019 as well (nearly ten albums each!), but with only a few albums that stood out. Among the promising new composers, Sooraj Kurup, Mejjo Joseph, Leela L Girish Kuttan and Ranjith Melappat gave some lovely songs.

The annoying trend of soundtracks not releasing in full until well after the movie release, no proper listing and/or songs scattered across platforms continued in 2019. An extreme such case happened with Valiyaperunnal – the movie released by the cut-off date for our list in 2019, but the full soundtrack wasn’t out by then (still isn’t maybe, there’s no telling the status of late).

Gopi Sundar composed as many as ten soundtracks in 2019, but his best output was for the moving drama Uyare. The album has three songs, which is right on the average Malayalam soundtrack today; all three work beautifully as montages in the film and as songs in the album.

‘Nee Mukhilo’ begins with what almost feels as the nod to Ilaiyaraaja’s eighties track ‘Valaiyosai’; but immediately transitions into a rather melancholic duet that rings quite true in the context of the film. ‘Pathinettu Vayasula’ is a quirky offbeat track. Shakthisree Gopalan is wonderful in the chirpy, folk-based ‘Kaatil Veezha’.

Kailas Menon who gave us Theevandi in 2018 (in particular, the lovely ‘Jeevamshamaayi’) had three soundtracks last year – Edakkad Battalion 06,  Ittimani: Made in China, and the best of the three, ‘Finals’.

It is always a pleasure to listen to Naresh Iyer – it is good to see him back behind the mic after the lovely, overlooked song of Iblis in 2018. Priya Prakash Varrier offers a great company alongside Naresh in this duet. The pick of the soundtrack, however, is ‘Manjukaalam’. The serene composition is very much up the sleeves of its singer Srinivas.

Four composer-singers came together to deliver the score and songs for Thamaasha, yet another balding-man movie, last year. The soundtrack consists of just two full songs but has a lot of interesting cues and a couple of very short songs.

The pick of the soundtrack is the song by Neha Nair-Yazkan Gary Pereira titled amusingly as ‘Masala Chaya’. It is annoying that the song lasts barely a minute and a half. But what starts like a background piece quickly transitions into a beautiful meter ‘Poo Pudhu Puthanpoo’ that also sets the tempo for the next one minute or so.

Puzhikkadakan is another of the few multi-composer soundtracks in our list this time. Ranjith Meleppat does the most, and best, work with three songs; Bijibal and Ajay Joseph have one song each.

Bijibal goes retro in the short ‘Mazhavannu’ and hands it over, aptly, to P Jayachandran. Ajay Joseph’s ‘Akelaayi’ is deliberately paced and is not always engaging. The album starts to look up with Ranjith Melappat’s title song — a spirited Harish Sivaramakrishnan greatly supports the racy composition. ‘Nakshathram’ is mostly template melody, but Meleppat hits it out of the park in ‘Ponveyilin’, the standout song of the soundtrack, and perhaps also of the year.

Guitarist-singer-composer Sanjeev T returned to Malayalam mainstream music, after his proper debut in 2017 for Vilakkumaram. The songs of his sophomore effort ‘Manoharam’ have received much love.

‘Kinavo’ is a sweet, catchy composition backed by a lovely guitar riff. The particularly delightful part of the song is how Shweta Mohan almost sneaks in the duet via a brief harmony stretch. Sid Sriram starts rather atypical in ‘Akale’, but quickly makes his presence and choice felt when the song makes a crescendo.

Vinu Thomas compiled a fine, elaborate soundtrack for Neeyum Njanum. The album is heavy on melodies and we are not complaining; it is lovely to see such soundtracks showing up amidst the norm of two-three songs in Malayalam.

‘Ishq Kond’ rides on the Sufi template, but it has a lovely melody and Najim Arshad’s singing going for it. Malayalam music scene unfailingly produces a chart-topping Reetigowla-based song every year — in our list this time is ‘Kumkumanira’ sung by Shreya Ghoshal. Another delightful melody in the soundtrack is the albeit-short ‘Thedunna Theeram Nee’.

Shaan Rahman ties with Gopi Sundar in terms of how prolific they were in Malayalam last year. He produced a fine album and score for the thriller-drama Helen and went comercial with mixed results in Love Action Drama. His best work came out of Pranaya Meenakulade Kadal; the director Kamal parted with his usual affiliates in favour of Shaan Rahman, and it turned out well.

The highlight of the album, easily, is ‘Kavarathi’ sung with contagious enthusiasm by Lekshmi Nair. It is easily one of the happiest songs (perhaps a mood that is not as adequately reflected in the soundtracks as one would think) in Malayalam last year.

Neermathalam Poothakalam is another lovely soundtrack that came out in 2019 that is replete with romance and melodies (like Neeyum Njanum). The nine songs compiled here work quite well as a soundtrack.

The two songs sung by Haricharan are popular, especially the semi-classical track ‘Vennalavin Thaliralle’. ‘Chenthamara Poovin’ is lovely despite a bit of jaded feeling. KS Harisankar sings two songs, the peppy and celebratory ‘Mizhiyum’ and the longing ‘Aarodum Mindaathe’. Another semi-classical track ‘Yaaminiyaai’ sung by Harish Sivaramakrishnan borders on sounding like a devotional number but the song has a lovely rhythm and perhaps an intentionally muted vocal track.

It is nearly half a decade past classical vocalist-composer Ramesh Narayan’s last big award-winning feature film soundtrack for ‘Ennu Ninte Moideen’. His work in Kolambi is very much what we expect of him. The short soundtrack gets three on three right.

It is not surprising that all the three songs lie in the classical-semi-classical spectrum. ‘Aarodum’ is perhaps the most filmy of the three, rendered by Madhushree Narayan in such a fine form. She gets to explore a lot more in the beautiful ‘Parayathae Arikil’ that almost works like a fusion in the interludes. The slow and pensive ‘Ororo Novil’ finds Bombay Jayashri in her Life of Pi lullaby form.

Composer Ifthi made his proper Malayalam composing debut with June just around the end of 2018. With eight songs, the album furnishes a great variety and fresh sounds.

When Bindu Aravindan goes ‘Mele Mele Maaya Megam Pole’ in ‘Koodu Vittu’, she tacitly communicates the heart of the song and of the album itself. The song also works wonderfully as a fusion with carnatic bits in the end – again, speaks to the album itself and of its innovative soundscape. The pick of the album is perhaps the fabulous duet ‘Adyam Thammil’ due to, in no less part, the crooning singers Anne Amie and Sooraj Santhosh. The song has a superbly-underplayed percussion going for it.

Composer Leela L Girish Kuttan gave two back-to-back soundtracks this year, first one being Oronnonnara Pranayakadha; it had a couple of good songs, especially a lovely Vidyasagar-ish melody ‘Athippoovin’. But he outdid in the three-song soundtrack for Thottappan.

‘Pranthan Kandal’ is a lovely duet led by two reigning star singers Pradeep and Sithara Krishnakumar. The song has a slow lilting tune, like a lullaby. The second song of the album ‘Meene Chembulli’ is a delightful composition, easily one of the best songs of the year. The under-used Nikhil Mathew’s singing here has a dreamy quality, just like the song itself especially in its interludes. The third song ‘Kayale’ sung by Sithara Krishnakumar is brooding yet beautiful.

The flautist-composer Vishnu Vijay has delivered big in his sophomore composing effort for Ambili. Quite literally so, the album has whopping 10 tracks, including a Hindi and a Kannada song; the variety is as pleasing as its cover art.

Anthony Daasan feels quite at home singing the playful ‘Naan Jackson Allada’. ‘Oru Cheru Kili’ is another thematic, sprightly, background piece rendered well by Benny Dayal; the kids’ vocals are rather muted here, but the cheerful bunch lead the short ‘Kunjalambili’. Vishnu himself gets behind the mic for the very AR Rahman-ish meandering melody ‘Pulari Virinju’. Shankar Mahadevan steals the show with not one but two magnificent versions of ‘Nenjakame’. Saving the best for the last, ‘Aaradhike’ is easily the most moving, earnest compositions of recent times, the words and the singing brim with love and soul.

Mejjo Josseph produced pretty good music in 2019, Vaarthakal Ithuvare is the definite highlight. Unfortunately, the album and the movie seem to have gone unnoticed.

Mejjo indulges us with full retro sounds, which has grown to be his signature now. The delightfully chirpy folk and beats in ‘Kelkkaam Thakiladigal’ works like a charm; same is true of ‘Kunneri Parannu’ rendered by Madhu Balakrishnan. By the time the listener gets to ‘Katheyengo’, they must have easily well-internalized the soundscape. Of the two songs rendered by Venugopal, ‘Swapnam Thedum’ is exquisite and ranks high in the songs of the year; the duet is magical, the flute, the arrangement and the entire composition is fantastically retro.

After more than two years since his ‘Sita Kalyanam’ for Solo (2017), Sooraj S Kurup is in a blazing form in his latest full-fledged soundtrack for Luca.

The five-song album peaks right in the beginning with a wonderfully resounding ‘Ore Kannal’. The song grabs the listener hook, line and sinker in no time with its arresting beats. The singing ensemble is particularly remarkable here, very much like in Govind Vasantha’s ‘Anthaathi’ song (from last year’s Tamil hit soundtrack ’96).  ‘Vaanil Chandrika’ is a dreamy duet, with Ziya Ul-Haq doing the honors with the Hindi verses as usual. The slow-paced and serene ‘Neeyila Neram’ comes in two versions, both rendered by the composer, Deepa Palanad offering a great company. This song unequivocally invokes his Solo form.

Indian film music is in the safe hands of many up and coming composers, Sushin Shyam particularly is one. His career arc over the last few years has been staggeringly good. Kumbalangi Nights is a crown in his career, and our pick of Malayalam soundtracks of 2019.

The movie, and the soundtrack, opens with ‘Cherathukal’, a beautiful lullaby that Sithara aces in her characteristic style. Sushin Shyam has this innocence about his vocal quality that is quite hard to pin down in words – ‘Ezhutha Kadha’ just appeals to that. The score for the movie is lined with moody thematic pieces like the contrasting ‘Lagoon Chill’ and ‘Silent Cat’. The rising duo of playback singing in India right now, Anne Amie and Sooraj Santhosh, come together to croon a superlative ‘Uyiril Thodum’.

Kumbalangi… is a special soundtrack, one that will hold a special place, for years to come.