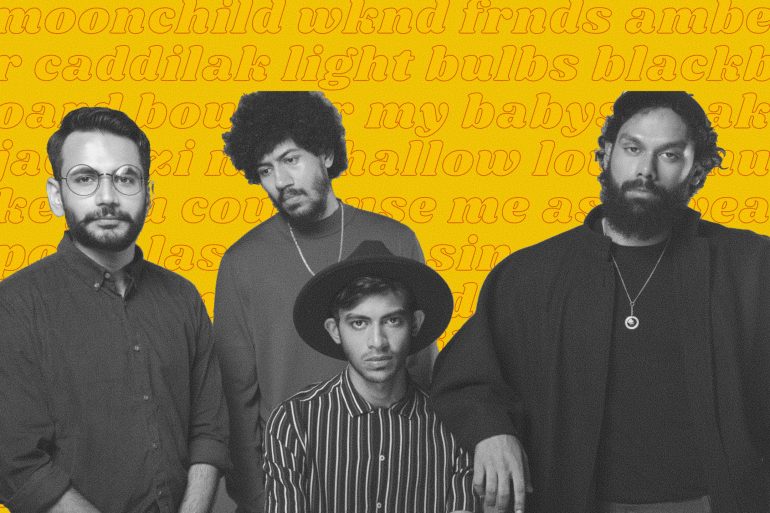 When Chennai-based quintet, the F16s stormed the gates of our collective musical consciousness back in 2013, it was a breath of fresh air. Their incorporation of production elements from electronica and a variety of other genres into their alternative rock sound opened doors to a multitude of different aesthetics and directions for the band and also their contemporaries.

The band comprises vocalist-guitarist Josh Fernandez, bassist Sashank Manohar, keyboardist/sampler Harshan Radhakrishnan, drummer Vikram Yesudas and guitarist Abhinav Krishnaswamy. With two full-length albums, an EP and a couple of one-off singles, they have hit us with a few different sounds and styles over the years while remaining very consistent with their quality.

‘Digital Dread’ is a deep cut in Triggerpunkte and remains one of the band’s most challenging, yet awe-inspiring tracks. Everything about the singular nature of its construction screams perfection. The dissonant and off-kilter synth intro on top of the blistering labyrinth of overdriven guitars and drums make for an experience that one seldom comes across. A powerful experience altogether, the track gives us a glimpse of the F16s’ eclectic taste, virtuosity and group chemistry as a singular force to be reckoned with.

The F16s took their sound back to modern Rock music’s blues-rock roots with ‘King’s Dream’ and had so much fun with it. The snappy, percussive goodness of the track and the animalistic performance by the members make for an unparalleled rock and roll deep cut. The band incorporates samples from Dr Martin Luther King Jr.’s famous I Have A Dream speech and reimagines it to write a song about rebelling against the conventional notions of how one’s life must play out.

‘Light Bulb’ off Kaleidescope definitely has a lot less going on than the other tracks on this list. But this only exposes the virtuosity of every band member. The rattling hi-hats and kicks by Vikram locks the groove in, along with the bassline and gives room for the melodic and memorable guitar lines. The vocal harmonies are chilling and soul-stirring when juxtaposed against the perfectly orchestrated instrumentals. The track is proof that the F16s do not need dense and complex tracks to sell an emotion.

The other half of Nobody’s Gonna Wait has a darker and more sinister sound than most of what you would expect from the band. Josh’s vocal performance and songwriting deserve special mention as it single-handedly carries the track. The tempo switch-up in the middle comes out of nowhere and hits hard even on repeated listens. The guitar solo and rhythm section in the outro comes together to create an unforgettable banger for the ages.

‘My Shallow Lover’ of the band’s debut, Kaleidescope is a testament to the wide-eyed optimism and infectious energy that made the F16s such a loveable band, to begin with. The lead melody on this track carves itself into your mind’s ear and just squats there for all eternity. The head shaking groove, with Josh’s ‘More Important’ refrain as the icing on top, is a recipe for the best Monday mornings you will ever experience.

‘Blackboard’ is one half of a two-track EP, Nobody’s Gonna Wait, which they released back in 2016 as a sort of a prelude to Triggerpunkte. The track also features sharper and more hard-hitting lyricism than the vast majority of their catalogue. It is more barebones than WKND FRNDS in terms of instrumentation. However, the band sacrifice dreaminess for relentless energy and passion as exemplified by the synergy between band members on this release.

‘Amber’ is, by all means, the best representation of the general vibe of WKND FRNDS and is done gorgeously. The band squeezes every last drop of dreamy goodness out of each note. It features stellar production which complements Josh’s amazing vocal performance. It is laid back and charming but does not omit the band’s signature emotional sucker punch towards the tail end of the track.

The title track off the band’s 2019 release features an uncanny blend of danceable grooves and psychedelic synth lines that make you feel like you’re suspended in mid-air. The song is the flag bearer of the melodic psychedelia which marks the band’s more recent output. The steady beat, coupled with the sparkly guitars and bass almost guarantee that you will not sit still while listening to the song.

The intro to their sophomore release and arguably best body of work, Triggerpunkte, is bouncy and unapologetically catchy. The performances all around are tight with good production work to augment the talents of the band. It is among the most upbeat songs the band has put out – which is saying a lot.

The second song off the F16s’ 2019 EP, WKND FRNDS gave us an F16 which felt like a natural progression from their previous work. The production is hazy and washed out, veering very close to dream pop territory. The instantly catchy vocal harmonies and dreamy synths make this song a relaxing, yet engaging listen.