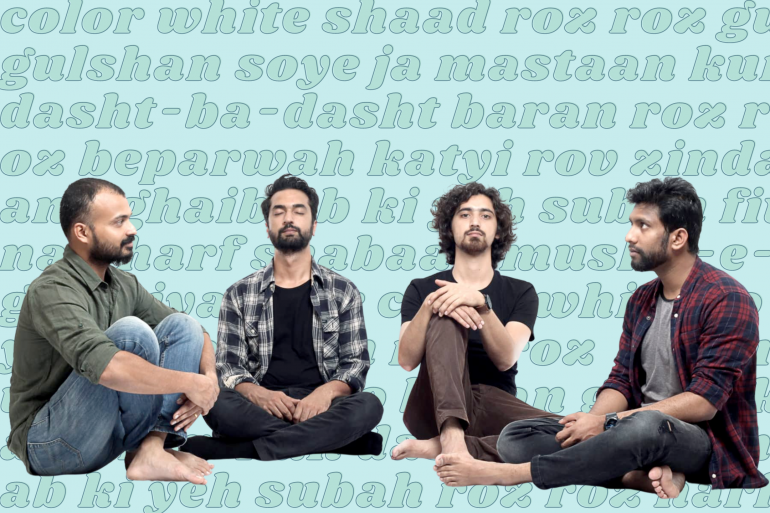 More often than not, a Parvaaz track is easily identified by its distinct build-up to a crescendo that is more than rewarding. The quartet from Bangalore write and perform their songs in Hindi, Kashmiri, and Urdu — their serene tunes cannot be confined to a single language. However, their songs almost always end with classic rock riffs accompanied by melodious vocals. Revisiting their works is an utter delight and so, here are AHH’s top 10 Parvaaz songs:

A part of Kun, the band’s much-awaited sophomore album, ‘Mastaan’ begins with the chirp of the neighbourhood sparrow and some soft strumming. Talking about impulsiveness and spontaneity, vocalist Khalid Ahamed’s cheerful mood is infectious in this spirit-lifting track.

This single just shrieks evil. ‘Khufiya Daastan’ can comfortably find its place as a background song in a montage sequence for the backstory of a villain. It takes the listener through the crests and troughs, building an amicable flow till Parvaaz decide to let the grandiose of their vocals and instruments take over instead until they fade out.

This single release in 2017 has one of the slower crescendos in the band’s repertoire. Almost tame compared to some of their harder rock offerings, the song mellows down to a lull before being built up softly by guitarist Kashif Iqbal’s riffs to a calming finish.

For all intents and purposes, ‘Dasht-Ba-Dasht’ functions as two separate songs merged by a calm bridge. The first half screams pervasiveness and intent; the latter bit is full of comforting vibes that make you want to dissolve in your subconscious thoughts. The song even has a radio edit, but we would recommend you to spend the extra three minutes and take in the full range that the band has to offer.

There hasn’t been a single live performance of Parvaaz where the iconic siren and drummer Sachin Banandur’s kick drum isn’t met with a raucous cheer. That invariably translates to a participative audience that claps throughout the song. While Banandur’s drums and Ahamed’s vocals resound with the frequency of a megaphone (in a good way!), it is Iqbal’s guitar solo that really ties the song together.

Ghaib keeps away from the classic rock guitar riffs, with the band choosing to go for a stripped-down mood here. Ahamed again shines with his vocals, questioning the mortality of human life— but in a rather comforting manner. Best consumed at 3 am, with a side of existentialism.

The fifth track from the album of the same name is also Parvaaz’s longest. Unlike most of their other songs, ‘Baran’s’ tempo picks up almost instantly and stays there till the final third, after which the medley dissolves into a subdued flow. Interspersed with Martin Luther King Junior’s “I have a dream” speech, the song is a testament to the band’s prowess, that they can keep the listener’s interest throughout its 13:28 runtime.

Nostalgia is a powerful drug, and ‘Itne Arsey Ke Baad’ tries to capitalise on just that. Reminiscing about home, Ahamed’s soothing vocals take you through his utter surprise at being so emotional about the entire experience. It ends with a classic rock solo by Iqbal, while Fidel D’Souza does well to keep the tempo distinct throughout the song.

Another one of Parvaaz’s trademark sounds that slowly builds up, only for the payout to be enormous. The quartet does an excellent job at constructing the tempo throughout its runtime, teasing you till they can get away with it. The additions of thunderstorms and wind chimes juxtapose well against the heavy guitar riff that the song eventually transforms into. Oh, and of course, the Urdu lyrics!

Think of the most peaceful morning you can imagine. The second song off Baran sounds exactly like that: calm, yet fulfilling. The various transitions throughout the song flow effortlessly. The guitars harmonising with Khalid Ahamed’s vocals are unmatched; while the crescendos leave little to be desired.