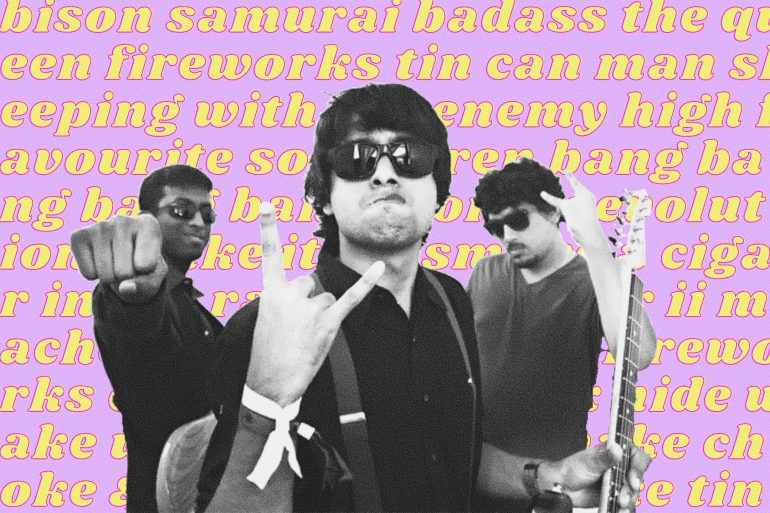 The garage rock three-piece Skrat is known for their high-energy live performances, catchy guitar riffs, hooks and punk-rock attitude. The Chennai-based band has a knack for making their audiences groove to their power-packed heavy sounds and have been doing so for a decade. With a few line-up changes since its inception, Skrat now consists of vocalist and guitarist Sriram T.T., drummer and backing vocalist Tapas Naresh and Jhanu Chanthar on the bass. From a slew of three independently released albums under their belt, here are ten of Skrat’s adrenaline-pumping songs that are sure to make you sorely miss the live setting.

Originally written on the acoustic guitar, ‘Stomp’ is a hard-hitting rock offering from their 2014 album The Queen. Simple yet heavy guitar riffs, an addictive hook, a complementary dark bassline and aggressive drumming brought together beautifully in this track will make you want to headbang and sing along to its beat.

The third track off their 2013 album Bring out the Big Guns, ‘S.O.S’ etches itself into the listeners’ mind with its super catchy intro riff itself. A representation of the soundscape of the entire album, ‘S.O.S’ features no frills – only raw and simple bass and guitar riffs along with heavy punk-rock drumming. The minimalist sing-along chorus with a simple melody and a no-nonsense breakdown complete the vibe of the atmosphere.

The grunge-inspired album opener from The Queen features Sriram’s recognizable aggressive vocal skills over ominous electric guitar riffs and melodies. The skilful drumming melds effortlessly with the guitars on the track ‘Machete’. Lyrics that rant against those in power acting like goons, a wordless chorus implying the fearlessness of standing against them and a banging breakdown is all that makes this song what it is.

A product of Skrat’s signature heavy sound from the 2017 album Bison, ‘Yipikaye’ features chunky guitar riffs, spaced out drum patterns, complementary heavy basslines and Sriram’s lyrical genius. A sing-along hook and a pumping bridge add an old school punk-like vibe to the track, making this one of every Skrat fan’s favourite tunes.

Based on another character off the Skratverse, Raptor features the band’s classic and crisp repetitive hooks with simple guitar riffs. Jhanu’s magic on the basslines gives depth to this track, which is perfectly complemented by the other members’ instrumentation.

Straightforward yet effective riffs with harmonized, and drumming which is almost perfectly engineered for headbanging make this track one of the crowd favourites in every Skrat live gig. With a bouncy chorus, a clockwork bridge, catchy lyrics, anarchist-like attitude of the vocal delivery over the beautifully structured instrumentation, ‘Wake Up’ brings out the best of the three members of the band.

The opening track from Bison leads with menacing riffs that enter into the heavy rock soundscape of the album. The note-worthy emergency siren-like guitars on the chorus pump up the adrenaline for the instrumental breakdown and then it’s back to the top. The aggressive riffs on the bridge slow the tempo down before descending into chaos again.

The track is based on one of the original characters from their Skratverse – the Tin Can Man. One of the favourites off their album Bring out the Big Guns, it features a classic alt-rock inspired pre-chorus followed by an unforgettable sing-along chorus. Tapas’ undeniably insane drumming skills take the centre-stage, giving this track a sort of anthem-like vibe.

A catchy, war-cry like opening to the song melding into powerful riffs backed by complementary yet strong percussion, this title track off their third album features solid and emotional songwriting. Head-pounding guitar riffs and a heavy breakdown complete the song – suited to The Queen’s prowess.

General Bison is the main character in the Bison universe. He and his army rise out of their hibernation after the fall of the Queen, to bring back peace to the world in their way of anarchy and chaos. The closing track features Sriram’s impeccable storytelling that invokes visuals of the soundscape beautifully. One of their mellower and darker tracks from the album, this ballad-like track is on every Skrat fan’s playlist.