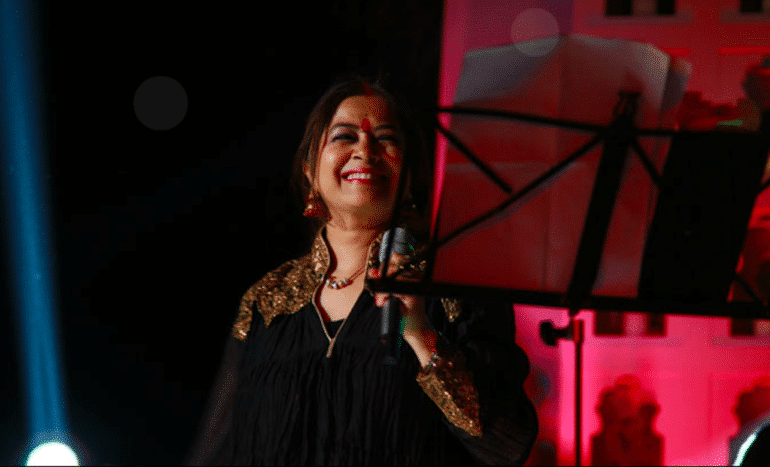 I had the immense privilege to watch Indian playback singer Rekha Bhardwaj live and the performance exceeded everything I had imagined. I was left counting my lucky stars that I got to watch Mrs. Bhardwaj live, and so easily (courtesy Hindu College’s fest). The talented vocalist has been one of my favourites as she possesses one of the most beautiful and different voices in the Indian music industry. Times are changing and the trend of only sweet, thin, feminine voices like Alka Yagnik, Shreya Ghoshal etc. getting success does not hold true anymore. Personally as well, I have a particular leaning towards female voices with some rasp and thickness like Nandini Srikar, Shalmali Kholgade and Rekha Bhardwaj herself.

The singer is married to the very talented Vishal Bhardwaj whose soundtracks she is mainly heard on. There is hardly anything VB can do wrong and his musical brain is just something else so Rekha Bhardwaj has had the privilege of singing some beautifully composed songs. Her unique voice has made her synonymous with a particular brand of songs, but the signer can do justice to almost all genres. However, when she sings sufi and classical or semi-classical, her impact is the most (as much as some people would like to believe it is the mujra-esque numbers). I also believe her works would be more appreciated by those with a penchant for Indian classical music. Even though her musical journey began in the late 90’s, it was “Namak Iskk ka” from the movie Omkara (2006) that got her the acclaim and attention she deserved, which she admitted in the concert I recently watched. Since then, she has been roped by every other music director and has a great discography to boast. It is very difficult to make a list of her top songs not only because the singer has that Midas touch and she owns everything she sings, but also because everyone has a different taste in music and many might not agree with this and the glaring omission of tracks like Kabira, Ghaghra and Mileya Mileya. So I went ahead and did one more than the usual, and here is a list of eleven of her best songs.

This song came out in 2003 and she was still known as “Rekha-Vishal” with people posting things like “Is she new to the scene? Never heard her name before” on the internet. It is surprising that this song, and “Chingari” didn’t get her more attention. This is a beautifully sung song and come to think about it, what can really go wrong with the Vishal Bhardwaj-Rekha Bhardwaj-Gulzar trio.

It was almost as if Vishal Bhardwaj was teasing us as his better half couldn’t be seen in the Haider music album right till the end. Fortunately he doesn’t let us down and Rekha Bharadwaj sings the last song on the soundtrack, Aaj Ke Naam. This is based on a nazm written by Faiz Ahmed Faiz and Mrs. Bharadwaj doesn’t disappoint and sings this with her usual perfection. The instrumental arrangement of the song is great with the use of gentle keyboard and beautiful violin.

Darling won Rekha Bhardwaj her second Filmfare award, this time shared with Usha Uthup. The old fashioned melody and vintage composition is perfect for Uthup and Bhardwaj, and both these ladies sound amazing in this gem of a song composed by Vishal Bhardwaj.

Pritam’s best album to date,Barfi! has a collection of great songs, but for me, Phir Le Aaya Dil is Pritam’s best composition to date along with Kyon sung by Papon from the same album. Rekha Bhardwaj owns the song with her flawless vocal quality. This track is so beautiful that there are two other versions of it, sung by Arijit Singh and Shafqat Amanat Ali, which are also good. But RB’s for me, is the one that really makes its way to your heart.

Composed by AR Rahman, this track won the singer her first Filmfare award. The song illustrates Rahman’s musical genius. The composer has done a fusion of folk and techno beats  and shown off his expertise in creating a fusion song. And Rekha Bhardwaj, with her earthy voice gives Rahman a masterpiece in his discography, which is saying something since ARR has so many jewels in his crowns.

Another song composed by AR Rahman, this one has Rekha Bhardwaj’s sensual and raspy voice perfectly complemented by Javed Ali and Anuradha Sriram’s soft vocals. One of the best songs to come out in the last five years or so.

This Omkara track that got her all the attention. Namak is perfectly suited for her folksy and throaty voice. An item number, but mellower making it mujra-esque, this song made Rekha Bhardwaj Bollywood music’s go-to person to get this variety of songs guaranteed hits. Ghagra, Hamari Atariya, a rendition of Dam Mast Kalandar (David) followed in the coming years.

It has minimalistic music set in a manner that would suit a dark lonely night.  It is a wistful and brooding song filled with pathos and the singer conveys Gulzar’s melancholic lyrics with perfection. Personally prefer it to every song in the Omkara album, which is a big deal, because it has songs like O Sathi Re and Naina Thag Lenge.

She won the Filmfare award for ‘Darling’ (along with Usha Uthup) but Yeshu is the master-track from the 7 Khoon Maaf Album. This is Gulzar, Vishal Bhardwaj and Rekha Bhardwaj at their creative best.

Another one from the flawless trio combination (Vishal Bhardwaj-Rekha Bhardwaj-Gulzar), this track from Ishqiya got Rekha the “National Film Award for Best Female Playback Singer”. I don’t want to say more than that this Raag Lalit based song is extremely beautiful and for me, it belongs in the top 10 Bollywood songs in the 21st century.

(I wanted to include O Boy Charlie and Raat Ke Dhai Bhaje, but both these songs have RB share space with other artists- Shankar Mahadevan and Mohit Chauhan along with a bevy of background vocalists in Charlie and Suresh Wadkar, Sunidhi Chauhan and Kunal Ganjawala in Raat Ke Dhai Baje. I would have added Jagave Sari Raat (Dedh Ishqiya) and Phoonk De (No Smoking) if the list went any further).