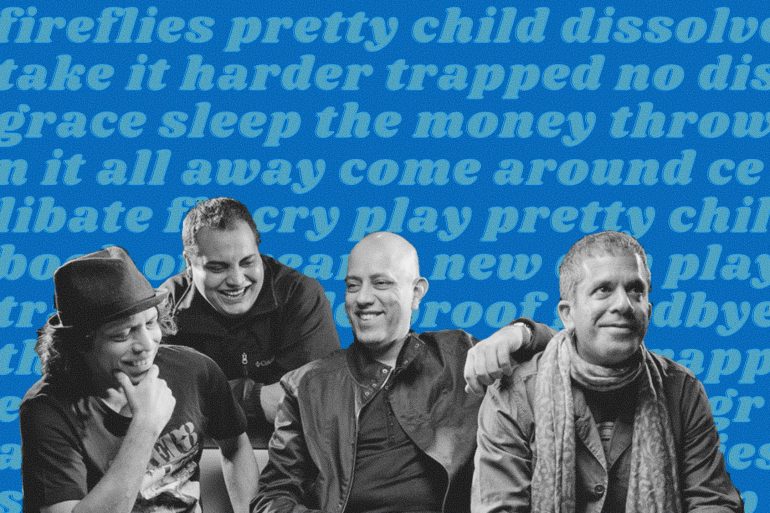 Formed in 1984, Mumbai’s Indus Creed (formerly known as Rock Machine) is one of India’s pioneering rock acts. Not only did the band open doors for artists around the country to write, record and perform their own music, but they also shaped the sound of Indian rock. The group paved the way for other prominent rock names such as Pentagram and Zero too.

With various line-up changes, a brief hiatus and comeback, as well as four albums under their belt, the band now consists of original members: vocalist-guitarist Uday Benegal, guitarist Mahesh Tinaikar and keyboardist Zubin Balaporia who are usually joined by several drummers and bassists from the scene at gigs including stickmen Andrew Kanga and Jai Row Kavi (from blues rockers Blackstratblues) and low-end holders Krishna Jhaveri (of prog-rock band Skyharbor) and Adil Kurwa (from rock outfit The Koniac Net and pop-rock band The Colour Compound). With a dose of nostalgia, groovy rock anthems and ditties, sit back and tune into our pick of the top 10 Indus Creed songs.

From 1990’s sophomore effort The Second Coming, the track opens with a three-part vocal harmony before a chunky, yet heady guitar hook takes over. Add to it the bouncy drum and bass groove as well as Benegal’s pacey vocals and you have a groovy concoction. While the chorus is a straightforward rock approach, the band gets meatier in the second verse with prog elements while a staccato section leads neatly into Tinaikar’s face-melting solo. The band also shakes up the dynamics throughout this song which shows off their masterful interplay while also getting quirky and humorous and ending it by letting out a burp.

The penultimate song off 2012’s, Evolve is a refreshing scorching display from the veteran rock act. There’s an insane amount of riffage that carries the song interspersed with drummer Row Kavi’s pounding on his kit. Benegal on his part throws in an angsty and syncopated vocal delivery over the headbanging number that is a pumping live staple for the group and one that will definitely grab your attention.

This is the song from the band’s 1988 debut album Rock N’ Roll Renegade that chronicles their time touring the then Soviet Union. The bluesy offering opens with finger snaps, a 12-bar roundabout, slinky keyboard fills from Balaporia as well as sugary background vocals. The song picks up in pace with a striking drum roll as Benegal sings of their adventures rocking it out in Moscow. Of course, Tinaikar provides us with two solos through the song while Balaporia is heard going into a jivey solo of his own before the track fades out.

Indus Creed also knows how to change the pace quite well as they showcase here from their self-titled 1995 third album. A heavenly tune that features a looping plucked acoustic guitar part with a simple yet effective bass line running under it, is one of the band’s most honest offerings. Benegal sings hauntingly with restrain and effectiveness as the song evokes plenty of emotion and pondering upon hearing it.

A soaring arena rock anthem from Evolve, the band channel plenty of prog-rock and a sort of Porcupine Tree approach to the song. Opening with a captivating guitar solo, there’s dynamics galore, unique melodies, various structural changes, and a total roundedness to the track. The band builds a sonic wall of distortion midway through the seven-and-a-half-minute banger as Tinaikar puts on display one of his most well-crafted solos that is sure to get you into a tizzy.

This delightful offering, off Indus Creed, is one of the band’s most popular acoustic songs. Kicking off with joyful percussiveness and jangly guitars, it’s one you can imagine being played around a bonfire. Although the band does throw in some heavy distortion towards the end of it, they mainly maintain the unplugged nature of it for the most part.

The hit track from Evolve ­­­­­– their first album in 17 years at the time – cemented Indus Creed as stalwarts in the Indian rock space. While the song’s music video was given plenty of screen time on VH1 India, the track itself was enough to sell it. From the ambient opening to the lush acoustic guitar strumming and the keyboard hook, the band takes you on a journey with this song. The chorus enters as if one has burst a bubble and it pulls down the curtain with imaginative rock that’s sure to make you smile and stay optimistic about music in India.

The opening song from their debut album begins with a hooky synth part from Balaporia and immediately sets the tone for the record. The jumpy 80s influenced track is fuelled with references of rock stars making it while the band sets ablaze their newfound freedom of performing their own material. Guitarist Jayesh Gandhi exchanges licks with Tinaikar as both the Marks; bassist Selwyn and drummer Menezes hold a bouncy groove throughout the fun singalong track.

A song so good that it made it to two Indus Creed records, The Second Coming and their self-titled offering. While the poignant track is far from their heavy rock and roll, the band instead incorporates a tabla in the song and even a saxophone that breeds so much diversity through the music. What did catapult this song to high on the list is its music video, directed by ad filmmakers Subir Chatterjee and Namita Roy Ghose. The softer nature of the band was well received by listeners and is always a staple at gigs.

If you needed one song to be introduced to this iconic band, look no further than their magnum opus and title track from their debut album. The spiralling keyboard work and giddy guitar parts from the solo to the crunchy strums make it an exhilarating listen. Benegal is at his frontman best here singing about rebelliousness and the like. To this day, the band continues to perform it at gigs, to not only make you reminisce about the past but also groove in the present.