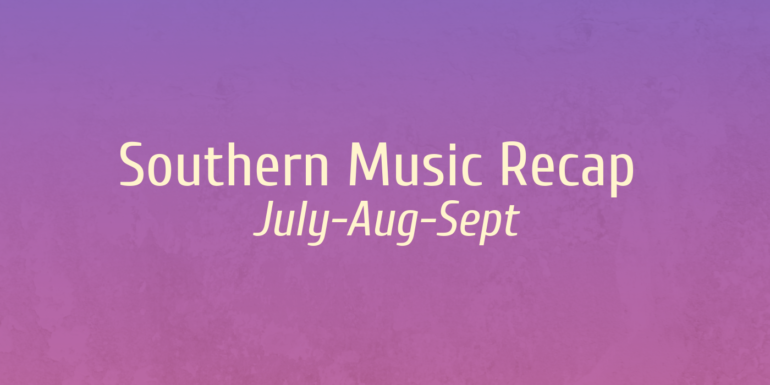 The music scene has been resplendent in the South this year. Here we resume our usual installments of musical roundup, picking up where we left off — our half-yearly roundup post. Below are some of our favorites from the last quarter of 2019, representing music from all four southern film industries.

While this list is definitely not sorted in decreasing order of favorites, this song makes an exception — it is in many ways the pick of the Indian (not just Southern) film music in the last few months. The song is an astonishingly fresh composition, albeit unsurprisingly non-filmy, by Masala Coffee Band. Arshad Khan’s Esraj stands out so distinctively, amidst multitude of talent at display here.

Haricharan gets to deliver a cracker of a song composed by Phani Kalyan for the Telugu film Jodi. ‘Cheliya Maate Chandanam’ speaks to the increasingly interesting and fine Telugu music scene this year. The song is sure to land in our year-end ‘best-of’ lists.

The composer who is having the year of his career strikes gold in this particular song of the sequel Naadodigal 2 (the first installment had a lovely set of songs by Sundar C Babu). The album features two versions of the song; the rain version pulls a surprise twist by changing tones 180 degrees near the middle.

‘Nee Himamazhayayi’ is winsome four minutes of warmth and comfort, composed by Kailas Menon. Very evocative of AR Rahman’s sprawling compositions, the song is set to a sweet lazy pace. All nuanced sounds come forth clearly in this ambient soundscape.

‘Kavarathi’ is not just the pick of Pranaya Meenukalude Kadal soundtrack, but also arguably the finest by composer Shaan Rahman in a while now. The beautifully shot visuals lend a great accompaniment to the jaunty composition.

Mickey J Meyer gave a rather lukewarm soundtrack in the earlier flick Oh! Baby. His most recent one is the remake of the Tamil movie Jigarthanda (music by Santhosh Narayanan). The song ‘Gagana Veethilo’, likely to be the counterpart of rather chirpy and light ‘Kannamma’ in the original, is far more intense. The ‘Kavitha Neeve’ lines are particularly interesting.

AR Rahman’s earlier offering with Vijay-Atlee Mersal made it an easy bar to raise in the latest collaboration Bigil. The album has at least two very good songs. ‘Maathare’ is an emotional harmony, much like ‘Madhura Marikozhundhey’ in the last year’s Chekka Chivantha Vaanam. Chinmayi headlines an ensemble of singers, rendering lyricist Vivek’s words with great conviction.

It is rather pitiful that Darbuka Siva’s debut album (almost three years ago) has just seen the light of the day (the film is yet to see the light, although). The soundtrack is easily one of the best in Gautham Vasudev Menon’s directorials. ‘Thirudaathe’ has a fantastic retro pop sound and arrangement, considerably backed by Jonita Gandhi’s outstanding singing.

Shaan Rahman gave a neat and fairly engaging soundtrack in Love Action Drama, though not in the same league as some of his best work. ‘Aalolam’ has a tender semi-classical arrangement, very much evocative of Harris Jayaraj’s ‘Oorellam Unnai Kandu’, incidentally also featuring Nayantara.

It is good to hear a lovely melody from Vivek-Marvin in a long time. Shweta Mohan is having a great year so far with hits back to back. She makes this solo, that has a lovely Nadhaswaram interlude, more beautiful with that musical ‘thithina thithina’ stretch.

The couple of songs released early this year from the remakes of the Hindi film Queen (2014),  touted as Amit Trivedi’s foray into the south, did not show much promise. But, he gets the essence of the South so right in ‘Antham Ankitam’ of his full-fledged Telugu soundtrack for the multi-starrer Sye Raa Narasimha Reddy. Shashaa Tirupati and Vijay Prakash, both debuting for Trivedi, sound lovely in their portions.

The single that released, strangely after a month of the album release of Vetrimaaran’s next Asuran, works the best thus far (more to come, apparently). The folk tune is not particularly fresh, but the phrases are delivered interestingly by the lead singers. Also, GV Prakash’s brief hummings are a nice throwback to Aadukalam days.

Sanjeev Thomas has composed and co-sung the lovely ‘Kinavo’ in the soundtrack of Manoharam. The song has sprightly strings, and a very charming and engaging progression going for it. The way Shweta Mohan enters the song ever-so-feebly in the background is particularly fascinating.

‘Aaradhike’ from Ambili, composed by Vishnu Vijay, is one of the best songs to come from Malayalam films this year. Sooraj Santhosh is at the helm of affairs, once again, and delivers exquisitely. Madhuvathi’s singing and in the Mohana Veena portions are moving as well. The culmination at ‘Ente Nenjaake’ is delightful.

‘Naa Lonaa’ is a beautiful composition by Chaitan Bharadwaj for the Telugu film ‘Manmadhudu 2‘. Chinmayi Sripaada has no issues sinking into the teeth of the song. The violin interlude provides a brief semi-classical touch to an otherwise light, filmy composition.

Dear Comrade is Justin Prabhakaran’s career-high soundtrack. ‘O Kalala Kathala’ is a stand-out composition, especially in his discography, and one of the most arresting filmy compositions of the year. When Sathyaprakash and Chinmayi Sripaada sing the repetitive ‘Raa Raa Rekkalane’ hook in chorus, the song is complete.

Prasad K Shetty’s single from the film Lungi is one of those instantly likable compositions. The song treads a familiar template especially when the Tabla portions kick in, but is engaging nonetheless. It is no-brainer to give the song to two of the happening singing stars, Armaan Malik and Shweta Mohan.

‘Jaathikkathottam’ is a light-hearted, tongue-in-cheek song with a spirited chorus. The lead singers Soumya Ramakrishnan (the unique opening female voice) and Devadutt Bijibal (the kid) easily slide into the emotions of the song. This is easily the pick of Justin Varghese’s Thanneer Mathan Dinangal.

Ramesh Narayan’s Kolambi is a brilliant short soundtrack, living up to expectations from the composer. ‘Ororo Novin’ is a delicate melody, that begins with an affecting Sitar portion by Purbayan Chatterjee. Bombay Jayashri takes off then, and does complete justice rendering the tender composition.