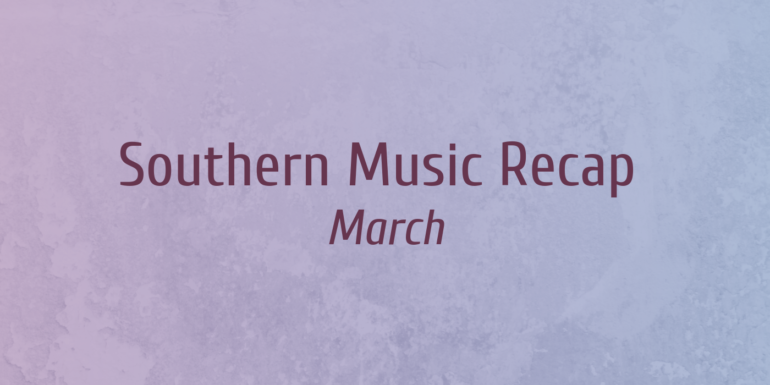 Southern film music had multiple highs this March. There were follow-up to releases earlier this year, multiple high-quality soundtracks, especially in Kannada and in Telugu. While there were very few releases in Malayalam, Tamil had a lovely soundtrack by the very consistent Joshua Sridhar who is but occasionally heard. Many of the songs below (in no particular order) are of quality that will stand out by the end-of-year.

Sheron Roy Gomez has composed this lovely semi-classical song for the Malayalam movie Neermathalam Poothakalam. The song begins with a Tamil verse that sounds great. The jathis, traditional instruments and Haricharan’s singing all come together so well.

Composer Arjun Janya has taken on the challenge of filling Govind Vasantha’s shoes for the Kannada remake of last year’s super-hit ’96. Four songs are out, and he’s done quite well so far. Shreya Ghoshal seems to be the voice of the album, filling in for Chinmayi in the original. ‘Navilugari’ is fantastic classical-rock fusion, likely the equivalent of the original’s Anthaathi.

Gopi Sundar has been consistently producing top-notch albums in Telugu, while being very prolific in Malayalam too. His work in Majili is on par with some of his recent Telugu hits. ‘Priyathama Priyathama’ is a lovely composition meeting a great match in Chinmayi’s rendition. The song borrows its ‘Istamaina Sakhuda’ hook from 2018 Malayalam movie Kamuki (also by Gopi Sundar), but betters it in every way.

Ajaneesh Loknath’s Padde Huli is a brilliant 10-song soundtrack. ‘Kalabeda Kolabeda’ builds on the traditional folk song (the video has more on this) – Narayan Sharma aces the vocals and the composition itself is quite a stunner.

Govind Vasantha, who had a terrific debut and run last year, has opened his account early in 2019. In Uriyadi 2, he continues to showcase the angst and distilled sadness that often pervade his albums. The highlight of this short album is the wonderfully worked tune of ‘Vaa Vaa Penne’. The version led by Sid Sriram sounds slightly better than the one by Vipin Lal. Priyanka is retained in both the versions, and is completely justified.

‘Nenena Nenena’, composed by Mark K Robin, is a wonderful spin of ‘Inthena Inthena’ that came out early this year. Shakthisree Gopalan edges Sid Sriram out here with her characteristic rendition. The best part is the vocal harmony that graces that the song occasionally beyond the opening.

The criminally underrated and underused composer Joshua Sridhar has churned five lovely songs for the upcoming Tamil film July Kaatril. ‘Merkilae Merkilae’ penned by the late Na Muthukumar and rendered by Sathyaprakash is as good as a Joshua song gets. If you’re not convinced, just wait until after the moment the song gets into ‘idhu pudhiya arimugam’ phrase.

The single composed by Achu Rajamani for the Tamil film Velvet Nagaram is highly experimental in terms of music as well as the lyric video. The song is very trippy and Achu also does a good job in rendering the many complex phrases.

‘Aattuthottil’ is a simple lullaby composed by PS Jayahari, new entrant to Malayalam cinema.  The song has a minimal, nostalgic arrangement, and a lovely classical interlude. It does send us more than two decades back to a similar lullaby in AR Rahman’s Kadhalan.