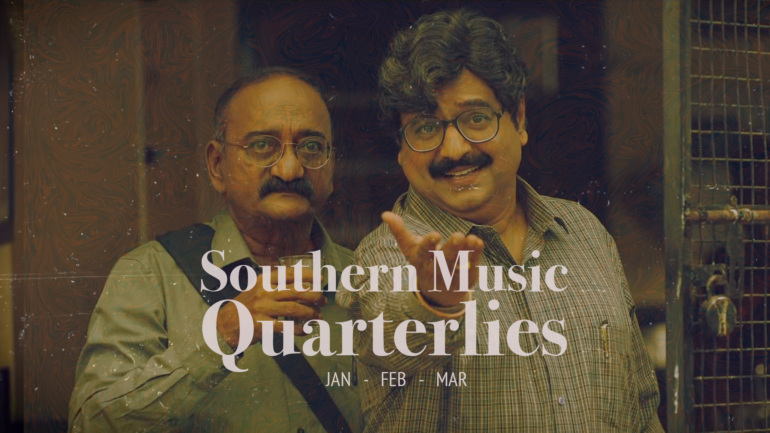 A recap of some of the latest and best film music from the South as the year drags us ever-so-slowly into the second quarter. Hope this playlist keeps you going, as the going gets tough.

Madley Blues are hardly seen in the mainstream, but they make their presence felt in their rare appearances. Their latest in the multi-composer lineup for the Tamil remake of Vicky Donor is a sprightly number.

It is good to see Masala Coffee composing a full soundtrack for the Tamil rom-com Kannum Kannum Kollaiyadithaal. Most of the songs are short and thematic, this particular one is especially fun and peppy.

Sid Sriram’s composing debut in Vaanam Kottattum turned out to be wonderful. This song, ‘Thinam Thinam’, is especially lovely; the titular phrase is melodic and catchy.

Nivas K Prasanna gets a terrific Abhay Jodhpur to render the gobsmacking composition ‘Sila Naal’, more than half a decade after their last, equally beautiful, ‘Vinmeen Vidhaiyil’ (from Thegidi).

Singer Vijaynarain makes his composing debut in Dagaalty. The tunes are popular, especially ‘Paaren Paaren’. The one here, ‘Aaliyah Aaliyah’ is a lovely experiment, throwing shades of Harris Jayaraj – intended as a compliment.

Ilaiyaraaja gives us another fantastic and haunting melody with a lush string arrangement and Sid Sriram’s vocals, soon after the surreal ‘Unna Nenachu’.

Amit Trivedi is already at his third Telugu soundtrack (following Sye Raa Narasimha Reddy last year, and the stalled Queen remake). Shreya Ghoshal is her fantastic self in ‘Vasthunna’; Amit Trivedi pitches in with the titular hook is not exactly a great support in this case.

Gopi Sundar’s run in Telugu film music industry is now taken for granted. The beautiful melody ‘Venakane Unna’ from Choosi Choodagane stands to reason the stature he has come to enjoy today.

The most promising Telugu composer today Vivek Sagar’s latest Hit is not exactly that. The middling album has only two songs. The better one is ‘Ventaade Gaayam’, a gentle jazzy club song.

Govind Vasantha composes four fresh tunes for the Telugu remake of the superhit ‘96. The soundscape is very much an extension of the original Tamil soundtrack, listeners can instinctively place the equivalent Tamil song in each case.

Bicchugatthi Chapter 1 marks singer Nakul Abhyankar’s sophomore composing effort (following Unarvu in Tamil).  The song ‘Dheera Sammohagaara’ is nothing short of fabulous, thanks to an excellent Anuradha Bhat behind the mic.

The consistent Ajaneesh Loknath delivers a gorgeous melody in ‘Arare Shuruvayitu’. Singer Vijay Prakash makes the melody even more beautiful with his rendition. There is an unmistakable nod to AR Rahman’s ‘Vennilave Vennilave’ (from Minsara Kanavu) in the interlude.

Charan Raj’s latest in Kannada is the 2-track soundtrack for the amusingly-titled movie Popcorn Tiger Monkey. Both the songs are psychedelic, one even titled so. ‘Maadeva’ has very interesting rock arrangement.

‘Ole Kanda Naal’ is a lovely solo rendered by Vineeth Srinivasan and composed by Hesham Abdul Wahab. There is a very interesting loopy synth throughout the song and a beautiful violin segment as well.

Composer Jackson Vijayan’s work in Trance is full of trippy and haunting sounds just what the movie title and the visuals of the lyric videos hint. ‘Jaalame’ is a prime example.