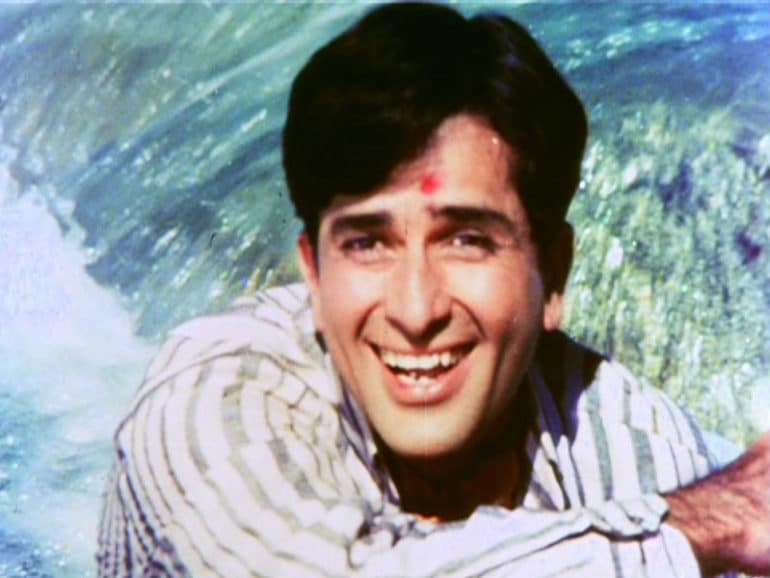 Shashi Kapoor, the last of the three Kapoor brothers who dominated the Hindi film industry for three decades, died on Monday evening, signalling an end of one generation of the first family of Indian cinema. The critically acclaimed actor who starred in superhit films like Haseena Maan Jayegi, Kabhi Kabhie, Namak Halaal, Sharmeelee and Waqt, leaves behind a legacy of great songs picturised on him.

There might not be too many ways of reintroducing this iconic Hindi song, but ‘Kabhi Kabhi Mere Dil Mein’ forms the soul of most playlists. To measure a greatness of a song, just assess if it can be enjoyed alone as well as in the company of others. The masterpiece has been sung by Lata Mangeshkar and Mukesh, composed by Khayyam and written by Sahir Ludhyanvi, and Yash Chopra’s direction has made it even more haunting on screen.

SD Burman’s melodious song is brought to life by Kishore Kumar off screen and Shashi Kapoor on it. Kapoor had a reputation for being a charming, chocolate boy and this proves exactly why! This was also the first time he and Rakhee, who went on to act in multiple films together, were paired together on screen.

Composed by RD Burman, penned by Sahir Ludhianvi and sung by Kishore Kumar and Asha Bhosle, this song went on to be a chartbuster and has naturally been remixed multiple times. The most recent version of the song was in the film Baadshaho, a “retro style remix”, which does no justice to the melody. Let’s remember the greatness of Shashi Kapoor (and Burman, Ludhianvi & Kishore Kumar) by listening only to the beautiful original.

Picturised on Shashi Kapoor and Asha Parekh, this song is another one that features on most lists comprising “evergreen Bollywood songs”. The fact that an 11-year-old boy sang it on ‘The Voice India Kids’ 49 years after it was composed by Shankar Jaikishan and sung by Mohd. Rafi proves why this song will remain ageless.

Jab Jab Phool Khile managed to be a blockbuster in 1965 and its music, composed by Kalyanji-Anandji and penned by Anand Bakshi, was widely acclaimed. Mohd. Rafi gets behind the mic for ‘Pardesiyon Se Na Ankhiyan Milana’ (all the songs of the film for Shashi Kapoor have been sung by him). The Kashmiri attire fits Kapoor perfectly in this song and his infectious grin and agility complement Rafi’s enthused vocals.

(While ‘Yeh Sama, Sama Hai Yeh Pyaar Ka’ from the same film is arguably more popular, more liked and a personal favourite, it doesn’t make sense to pick a song celebrating Shashi Kapoor where his participation is minimal)

The remixed version of Raat Baaki was heard just a few months ago in Siddharth Malhotra starrer Ittefaq. This is amazing because composed and sung by the “Disco King of India” (along with Asha Bhosle), this 1982 song shows the progression of music that was taking place in the early ’80s, and an unremixed version could sit well in any 2017  film.