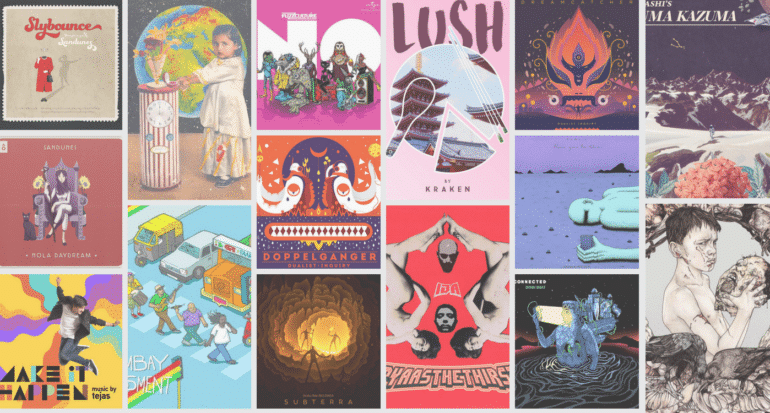 A good cover art speaks volumes about an album. The picture might not be worth a thousand notes, but it works as a visual aid in reflecting the genre and theme of the album and the artist’s basic idea behind the music. Having an attractive, eye-catching cover art also makes marketing the album much easier. Understandably though, music production and marketing takes up a big chunk of a band’s money allocation. When it comes to financial viability, cover art would be at the very bottom of the ladder for most.

However, there are some Indian acts that have commissioned a cover art that lets the listener know at one look what to expect from the album. It is very interesting to see how independent visual artists and musicians come together to offer an audio-visual treat to consumers. We asked some of the designers to pick out their favourite cover arts from independent albums that have come out in the last five years.

Mira, who has designed two cover arts on this list herself, has founded and runs Studio Kohl, a boutique design studio in Mumbai. She has been working closely with musicians and adding her splash of colour to several cover arts.

PCRC’s sophomore album released in 2015 was not only critically acclaimed but also set a benchmark for experimental music. Mira says, “Recently there’s been a spate of collage-based album covers, and this one is odd, dreamy, nostalgic and other-worldly.”

The cover art for No, designed by Visual Amnesia, is an instant pleaser. “I love the beautiful imaginative characters in great illustrative detail juxtaposed against a very graphic, simple text at the back. The colours are great, feels like a cross between the visual worlds of punk and metal,” explains Mira.

“The picture again feels otherworldly and has its own atmosphere. The tiny astronaut and the exaggerated plants set against this odd landscape really makes you feel like you’re exploring a forbidden planet,” says Mira about the multi-instrumentalist’s 7-track album.

Yash is an illustrator based out of Mumbai with a keen ear for independent music. His picks show how album artworks have been evolving with time in the indie scene.

“(Harikrishnan Panicker & Deepti Nair)’s work is a Pandora box full of stories and imagination that they bring to life through their intricate paper cut light boxes and paper clay sculptures, and this album is all about it,” explains Yash about the artwork for the electronic artist’s sophomore album.

The artwork for this album depicts the theme of the album accurately. Yash throws light on Eliran Kantor’s work with metal bands and the timeless quality of his art.

Another one by Harikrishnan Panicker & Deepti Nair and their signature style of paper cut sculptures, this one is an all-time favourite of Yash’s.

Released under Saavn’s Artist Originals initiative, Mumbai-based beat maker Sandunes’ EP was an audio-visual treat through and through, with an animated video accompanying each track on the 4-track EP.

The rock band hit bulls-eye with the very first EP, Lush. “Lush is a very experimental metal project by the band which is driven by a lot of inspiration from Japanese culture which has been represented on the album artwork itself by Moses,” explains Yash.

Kumail – From You To Blue

“Alex has a very intricate style of illustrations which blends with this album by Kumail so well, you should definitely check his artworks,” recommends Yash.

Arjun is the founder and principal designer of Arkwerk, and does UX and graphic design. Notably, he also designed the cover art for Blackstratblues’ Last Analog Generation which bagged the number 1 position on our top 20 indie albums list last year. He also picked Kumail’s From You to Blue, in addition to the following cover arts.

A much talked about album, Connected was Bhat’s third. Sonali Zohra’s accurate visual representation of his sound goes on to show her artistic ability and provokes the listener to hit the play button.

Another album by Dualist Inquiry on this list, Doppleganger was Sahej Bakshi’s first full-length album.

Tejas’ sophomore release, which also featured on our list of top 20 indie albums of 2017 at number 3, created a massive buzz in the independent circuit thanks to the unmissable creatives designed by Mira Malhotra of Studio Kohl. One of her most exciting projects, she explains, “more than the outside, the poster inside the album art is my favourite piece of illustration. It’s sweet, approachable, fun and tells Tejas’ story. Plus, it is an ode to all the cartoons we grew up on cartoon network.”

The band’s debut full-length album was more emotional and raw compared to anything it had released before. The artwork designed by Sachin and Sanjana Bhatt clearly captures the mood of the album.

Nisha founded the independent creative agency Whimnasium. She makes animated videos and graphic designs, and has worked with well-known musicians like Prateek Kuhad, Nishchay Parekh, the Lightyears Explode etc. Along with PCRC’s Climax and Kraken’s Lush, she picked out the following impressive artworks.

After its release in 2014, the self-titled debut album by Bombay Basement went on to become one of the most heard albums of the year. With the artwork, they bring the Beatles’ Abbey Road to Mumbai’s streets and give it a colourful spin.

Bhayank Maut is a well-known name among the fans of metal. The whole album comes with a 118-page artfully illustrated journal. The visuals are not restricted to fine imagery, but also extended to informative videos accompanying each track on the album.

With just three songs, Sanaya Ardeshir aka Sandunes’s first release Slybounce showed just how unafraid the young artist was of being herself. The artwork by Naasha Mehta beautifully captures her spirit in red on beige.