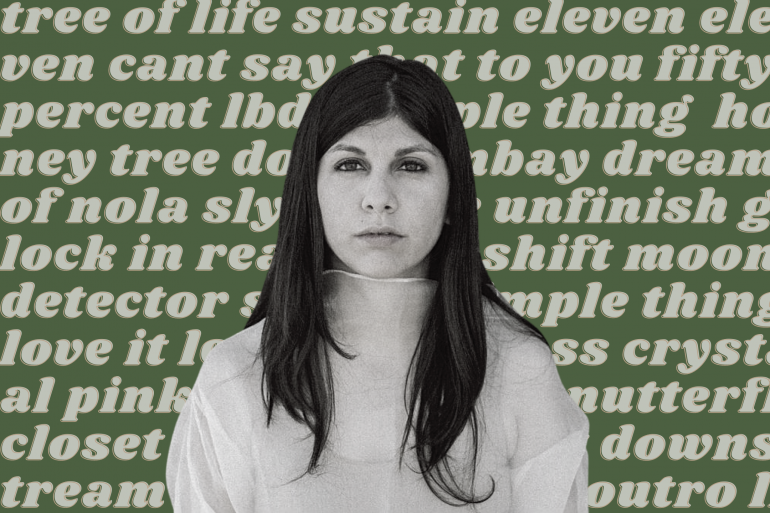 With the electronic scene burgeoning but still in its adolescence, it is hyperbolic at best and presumptuous at worst, to confer the title of “electronic music pioneer” on anybody in India. Six EPs, three full-length albums and multiple coveted residencies later, Sanaya Ardeshir possibly comes the closest.

Like her topographical namesake, Sanaya, better known as Sandunes, is unbound by imaginary boundaries, constantly mapping new directions for her music, in terms of instrumentation, production, performance and song-writing. The Mumbai-based artist, also a trained pianist, released two records this year including a critically lauded collaboration with virtuoso drummer Richard Spaven.

The range is astounding when you listen to her discography from start to finish, but retrospectively, it is also a natural culmination for one who has collaborated with the likes of Betamax and Spaven and created a formidable global footprint supporting/opening for Bonobo, Pretty Lights and George Fitzgerald.

Ranking our favourite Sandunes records wasn’t easy but we’ve given it a whirl. Read on for some underrated gems and fascinating backstories, while waiting for the next one.

With a modest repertoire of three singles, Sandunes formally arrived in 2012. Now a record with certifiable cult status, Vital Sines made people sit and take note of the twenty-something behind the moniker, who was then still largely unknown outside of Mumbai. Set to juddering beats and jaunty synth lines, the singles that form Vital Sines, namely ‘Rabbit Hole’, ‘Tbh’, and ‘Elf Chord’, often pull each other into the realm of vintage video game soundtracks. Amidst tight beats and filtered vocals, the record consists of some of Sandunes’ most aerobic tracks, each interspersed with moments of cooldown to heighten the drama.

With her debut EP Unfinish, Sandunes showcased her potential to produce intelligent, striking pop for the first time. The album begins with the confident, captivating beats of Dashiga, rendered tranquil by a mallet synth overture. Immediately afterwards, the record picks up the pace with US hip-hop artist Dahlak Brathwaite spitting bars over a jazzy bed of Sandunes’ making.  Occasionally approaching RnB territory, ‘Stitched’ and ‘True That’ complete the record. Overall, Unfinish – which might never have seen the light of day had Sanaya not lost her hard drives on tour – weaves an introspective, accessible style somewhere between pop and hip-hop into a long and vibrating rhythm, without a seam to be seen.

With her debut album, Sandunes made it impossible to pigeonhole her as a certain kind of producer. Enlisting a motley crew including singer-songwriters Siddhartha Basrur, Uday Benegal, and Dualist Inquiry’s Sahej Bakshi on guitar, Sandunes infused the 2013 record with influences from hip-hop, house and electro-pop. ‘Perfect Fit’, for instance, begins with sparse notes and a string section, eventually adding jungle beats and avant-garde textures to Benegal’s vocals. Then there’s Murray’s spectral vocal sample ribboning through the last-but-one track ‘Holding On’, accompanied by beats that accelerate and then dissipate mirroring the album’s second track ‘I Would’. However, the record is at its most impressive on ‘Won’t You’, with Sandunes conjuring heart-quickening drama out of muffled and distorted programming all by herself.

Our pick: Won’t You

The making of NOLA Daydream is as curious and multi-cultural as the record itself. The earliest scratches (that were produced over) can be traced back to the time Sanaya spent jamming at a studio in New Orleans, Louisiana. Taking a leaf out of US producer Pretty Lights’ book, she built sample tunes from these sessions and turned them into complete tracks upon her return to Mumbai. In an interview, she describes the record as an exploration of her identity and ancestral lineage. Cleverly interpolating ethnic motifs, the tracks ‘Does Bombay Dream of NOLA?’ is both a nod to Bonobo, whom she has supported on various tours, as well as to a Werner Herzog documentary containing the lines – Does the internet dream of itself?

Our pick: Does Bombay Dream of NOLA?

If you ask me, this is what put her on the map. Comprising of three singles that went on to be widely performed and remixed, the record kicks off with the playful title track which marks her first collaborative moment with Landslands. Clocking in at just over 13 minutes, the EP sees Sanaya moving towards a more organic electronic sound even as she dabbles in retro-futurism. While she gives herself a free rein to perform percussive gymnastics for ‘Moon Detector’, it is on ‘Exit Strategy’ that she exercises control and develops a narrative that escalates from Point B to Point C for crescendo!

According to some, the 2018 EP Downstream – Sandunes’ longest and completely solo album till date – is responsible for putting her on the map. For most fans, however, it has come to illustrate the scale of experimentation that defines Sandunes’ music. For an artist who loves playing with tempo and volume, Sanaya throws down the proverbial gauntlet on Downstream, audaciously navigating a world of percussive sounds and pulsating rhythms to create a heady mix of songs. The album is fierce, energetic and quirky, with no dearth of club cuts.

For her second project this year, she paired up with British jazz drummer and percussionist Richard Spaven to guide his beats along with alternating states of syncopated chaos and tranquillity. A drummer par excellence herself, Sanaya here slips effortlessly into the role of a producer, creating a seamless exercise in sound around Spaven’s often-improvisatory compositions. Stripped of any self-indulgence, the slick, synthesised melodies sit perfectly atop his clinically precise drum notations, causing just the right amount of distraction and making it an essential piece of nu-jazz, besides decisively translating her local success to a global audience. Read our review of the album here.

Our pick: Tree of Life, Sustain

Putting JBabe, Landslands, Ramya Pothuri and IAMI in charge of vocals, Sandunes explores a different sonic landscape in each of the four tracks that make up Spare Some Time. While Joshua Fernandes (JBabe) and Ramya underscore the dreaminess of Sandunes’ complex and soulful tunes, ex-bandmate Rachel Varghese (IAMI) livens it up with her brand of vibrant pop. Landslands returns, packing heat in ‘Burn Every Bridge’, underpinning the heartbreak thematic in those swirling synths. A woozy RnB aesthetic envelopes the record, consolidating Sandunes’ proficiency as a songwriter in addition to everything else.

Described as her breakthrough EP by Resident Advisor, 11:11 released via Berlin label !K7 Records in 2019, is an intricately produced 22-minute affair that testifies to the globalised sound she picks up those extra points for. Kicking off with the earwormy title track featuring regular collaborator Landslands (fka. Nicholson), Sandunes develops bare smoky beats into fast-paced rhythms as the album progresses, with help from UK drummer Betamax (Max Hallet). On ‘Glock’ and ‘Shift’, she deploys synthesised melodies against sharp notes, but it is only on ‘Ever Bridge’ that she puts her leftfield proclivities on full display, setting signature atmospheric melodies to a flurry of percussive beats.

Our pick: Ever Bridge