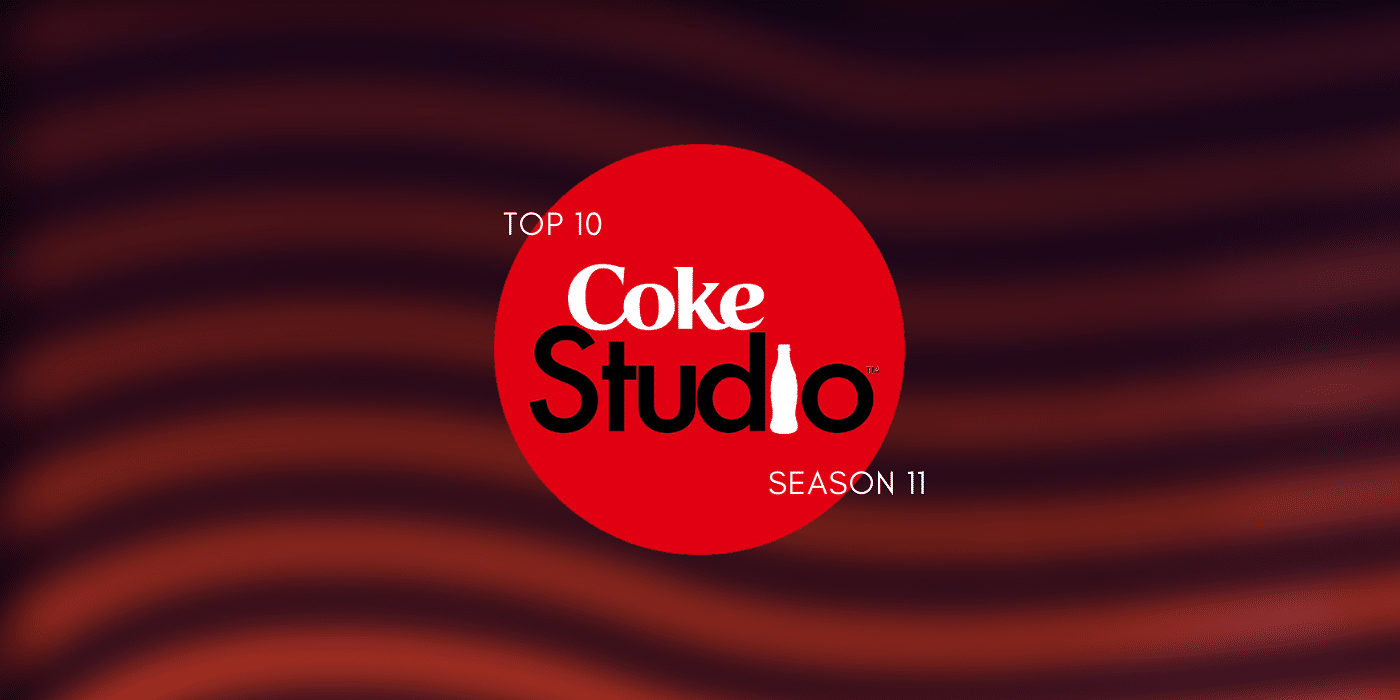 With new producers helming the show, there was a lot of excitement around Coke Studio’s Season 11. Ali Hamza and Zohaib Kazi did a fantastic job and further raised expectations with a wonderful Explorer prelude, but the nine-episode long season 11 was largely unremarkable and was heavily panned by fans online. However, there were some good songs littered across the season which shouldn’t be forgotten very easily. Here are the top 10. (Note: Songs from Explorer have been excluded altogether).

Set on a groovy melody and instrumentation, Shuja Haider modifies his voice to suit the feel of the simple song. Backing vocalists Shahab Hussain, Wajiha Naqvi and Mehr Qadir shine and their harmonies add a lot of substance to the song. The songwriter proves his talent again with the composition and the melody (and the composition also suits his singing).

Sahir Ali Bagga and Aima Baig sang the wonderful ‘Baazi’ last season and manage to weave the same magic with ‘Malang’ (which incidentally carries portions from ‘Baazi’ as well considering its a modern adaptation of the Saraiki folk classic). The track is fun, groovy and zesty. Bagga’s composition and Ali Hamza and Zohaib Kazi’s production is on point.

Shuja is regarded as one of the best composers and songwriters in Pakistan, and with ‘Aatish’, he once again proves why. ‘Aatish’ goes through different styles and tempos, and finds home in all of them. The banter between Haider and Baig is great to watch and their chemistry as artists is palpable. The beat and melody are built on two different styles, the song even has two different bridges, but somehow it all works. With such strong songwriting, the minor issues can be overruled because the song has a lasting impact. Shuja’s singing is limited which shows despite avoiding and reserving the tougher parts for Aima Baig, which she executes brilliantly.

Chand Tara Orchestra executes a beautiful rock rendition of Persian kalaam ‘Nami Danam’. While it takes a while to get into Sherry Raza’s slightly nasal and rustic vocals and many native speakers have said his singing doesn’t fit the language, for someone unfamiliar with the language, his voice starts to sound perfect for this song, as it progresses. The instrumental arrangement is excellent, and every time the harmonica is played, the sound is elevated further. This entire rock track is produced superbly and is a winner through and through.

The first beat of ‘Main Irada’ sounds like Coldplay’s ‘Ink’, but that memory lasts just a couple of seconds because the maracas and harmonium come in and elevate the overall sound. Viccaji’s voice complements Haniya’s beautifully; in fact, it often feels like just one voice. The song could have been slightly tighter, and a little shorter, but given the number of people sharing the stage, it’s understandable. The choice of using the harmonium as a central part of the song, to play the hook, was a great decision. Coke Studio Explorer discoveries Shamu Bai, as well as Ariana & Amrina, are also part of this song, making it the first song featuring an equal number of men and women performing on stage in Coke Studio’s history.

The father-son duo of Attaullah Khan Esakhelvi and Sanwal Esakhelvi come together to perform an interesting fusion of folk and electronic music — ‘Allah Karesi’. Sanwal adds an intriguing layer of industrial and orchestral sounds on a sampler, but ensures it in no way overburdens the Sairaki track. He is exceptionally restrained and makes the listener want more, and yet, anything more could have been a misfire.

The song starts with Pashto music band Khumariyaan’s intoxicating rubab which backs ‘Queen of Pashtun Folklore’ Zarsanga’s vocals. It then switches to a more funky and groovy tone to which Gul Panrra begins singing, backed well by the team of Shahab Hussain, Wajiha Naqvi and Mehr Qadir, who considerably enhance the overall sound. This wonderful juxtaposition of old and new works beautifully.

Indie ensemble Sounds of Kolachi made its much-awaited debut and produced an absolutely stellar performance in ‘Ilallah’. Lead vocalist, Ahsan Bari’s voice has the right mix of pain and soul to begin the track. The other members joining in later along with the drums that give the song a lovely rock-base. Bari has previously spoken about writing music for the band, for all the instruments as well which is commendable but ‘Ilallah’ correctly manages to put forth the talent of the frontman as well as the rest of the band. The orchestral build-up is followed by a short but lovely sitar and sarangi solo that sees a small vocal harmony layered on top. The eastern sound then shifts towards a more western one. The tail-end of the track has a portion of sitar and drums, with the electric guitar joining in later, and the fusion is brilliant to witness, which makes one grateful that Coke Studio is a visual platform.

Contemporary instrumental fusion/funk band Mughal-e-Funk produce a captivating composition in ‘Aurangzeb’. A musical interpretation of the life of emperor Aurangzeb (in the realm of art, music, poetry and literature), the primarily instrumental track wonderful illustrates the band’s technical prowess along with its inventiveness and ability to express.

Sindhi Sufi band, the Sketches perform ‘Dastaan-e-Moomal Rano’, the standout song from this episode. Fakir Zulfiqar’s melodious narr (flute) begins the track. The subtle sound of Ashfaque Ahmed’s guitar accompanies lead singer Saif Samejo’s introductory vocals and Bhagat Bhooro Laal joins a little later. He also plays the khartal and ektara, and croons the folk part of the song. Singing the words of Shah Abdul Latif Bhittai from his kalaam of Moomal Rano, Samejo’s tender vocals along with Laal’s earthy and rustic sound beautifully narrate the daastan, even if one doesn’t look at the meaning of the lyrics. Somewhere at six minutes, the song has a break, which is followed by a beautiful instrumental arrangement, with the strings again leading the way. The amalgamation of folk with modern is seamless in the song and the house band is key in that – Rufus Shahzad plays the keys and a small harmonium part; Kami Paul plays the primarily plays the drums except at the beginning when he kickstarts the song with the percussion. There is an instantly likeable quality to it and you want the ten-minute long track to not end.