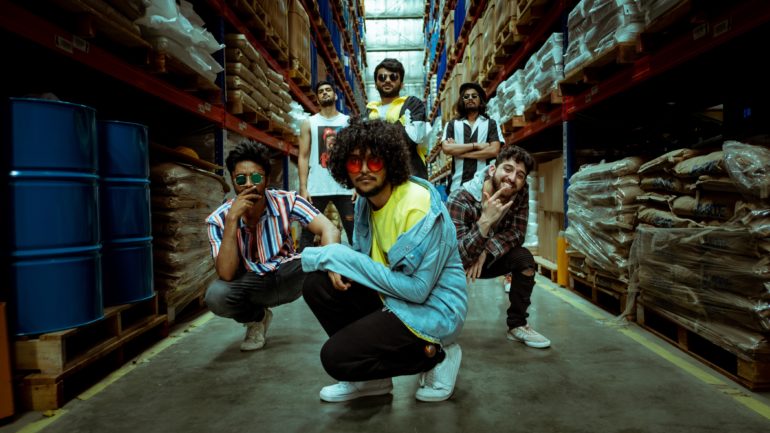 Watch: SIXK get in the groove of things on ‘Dansa’

Within two years of being together, hip-hop/urban pop group Sixk have made the right moves and are clearly continuing to do so. Their latest song ‘Dansa’ arrives via JioSaavn’s Artist Originals program, complete with slick choreography and instantly memorable vocal hooks.

Interestingly, the group says that conflict is one of the driving forces behind their music. Over an email interview answered collectively, Sixk tell us, “Conflict never gets resolved, that’s the beauty of it. How do you avoid compromise? You don’t. You keep fighting for what you want and the winner is the one who truly convinces the band that this is the best move for the song. Once someone identifies themselves primarily as a part of the band rather than a person in a band, good things happen to the song, you feel me?”

They believe that each member’s individuality coexists within ‘Dansa’, and it’ll be the case with all their future releases. Sixk previously put out songs such as ‘Roll Numbers’, ‘Conversation’ and ‘Realization’ to steady and growing listenership. Following a premiere on VH1, ‘Roll Numbers’ wound up with over 124,000 views on YouTube. The group says the songs preceding ‘Dansa’ were “very long drawn arduous productions.”  It turns out that ‘Dansa’ was produced overnight by Viraj Chheda. “The whole band came over the next few days, vibed and wrote.” The writing process, however, is not defined as such for Sixk. The group notes, “Different things happen for different songs. For ‘Dansa’ specifically, we wrote our individual verses and just put them together on the track. There is no rigid theme with this track. Each writer’s thoughts were triggered in different directions by the beat.” The song details varying verses about relationships (by Hari Pilaka) and xenophobia (by Rae Mulla) over a honeyed R&B chorus from Nihal Shetty.

‘Dansa’ did receive a TV premier on VH1 as well, plus the push from Artist Originals on JioSaavn’s millions-populated userbase, which Sixk say they’re appreciative about. The group is completed by drummer Siddhant Patra and producer-drummer Gisho Gajbhiye and there’s material in the works and a possible EP that they began work on last year. Live shows are also on the anvil, now that there’s a proper band aesthetic in mind. Sixk, however, says, “Everything is subject to change. But we always think about songs from a live angle when we create them. Viraj always has ideas about how to arrange and evolve songs for a live set and what matches where. It’s not an effort thing, thinking about the live set is as natural to us as creating the song. Hopefully we’ll take on the live stage with the right opportunity within the next couple of months.”