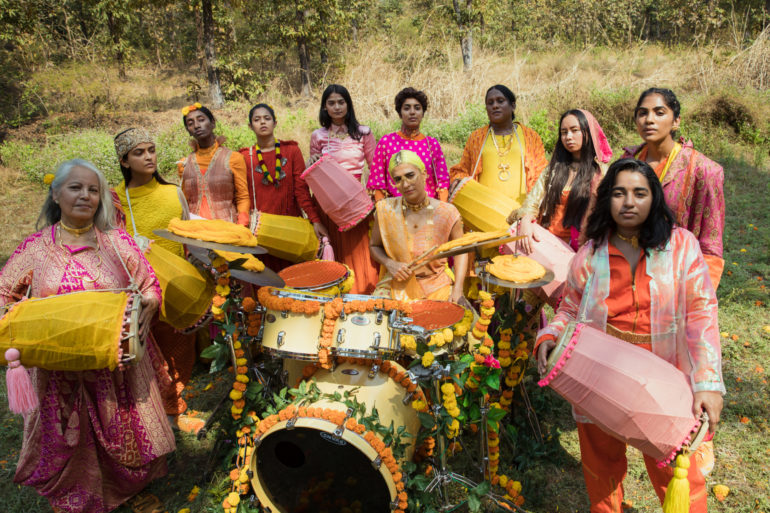 Watch: Waiting for Me by Madame Gandhi

The music video for LA-based music producer, drummer, artist and activist Kiran aka Madame Gandhi’s EP Visions track ‘Waiting for Me’ spins a subversive and surreal bildungsroman to reimagine a future built on solidarity. Since its release on June 29, the video has garnered high praise from the digital diaspora and even a place in RollingStone Colombia’s music video recommendations this week.

Directed by Misha Ghose, the video follows the story of ten girls “moving from individualistic, restrictive and problematic environments to unified, joyful, free nature environments… The story is about questioning environments that do not work for us and designing the alternative,” Gandhi blogs.

The girls’ covert desires to break free of the school/prison industrial complex are deftly portrayed through production design and costumes, all of which are speckled with neon against an otherwise-dull and oppressive backdrop. Guided by mother earth, they grow up revising femininity, assuming power, rejecting handouts, and living up to the opening lines, “I don’t want my identity to be defined by how oppressed I am.”

Created by a squad of brown womxn, the world of ‘Waiting for Me’ is nonetheless quite sanitised and borrows from grassroots motifs, without fussing over intersecting its fourth-wave feminist narrative with a caste or class dialectic – an agenda for another day.

Aware of the blurred lines between performative and non-performative, the “intentionally programmed” cast of queer, trans, female and gender non-conforming folks comprising artists and Gandhi’s friends lends a visual form to something Kiran said in a recent interview, “[…] we should be more emotionally intelligent… prioritize collaboration instead of competition and really seek to live in a world that is linked and not ranked.”

The open-air wedding scene simulated in the end is intergenerational, suggesting a confluence between femmes and their many selves, a rite of passage and cause for rapturous celebration. Shot in the outskirts of Mumbai before the scourge of border closures, the video has since become an anthem for marginalised groups who’ve always led a semi-quarantined life of limited freedoms, and for everybody else who is beginning to wake up to their privileges.